Skip navigation!
Story from Fashion
After a factory collapse killed 1,129 workers in Bangladesh in April, pressures increased on major brands worldwide to actively engage in more ethical labor practices. Now, The New York Times reports that the Obama administration will suspend the special privileges afforded to Bangladesh over concerns about conditions and rights violations in the country's expansive garment industry.
An official announcement will come later today, and until then, representatives have declined to comment. But this is actually in response to pressures that have been mounting since 2007. For years, Bangladesh — a major manufacturer for many international companies — has been one of 125 countries that is allowed to export some 5,000 products, duty-free, to the U.S. in the interest of promoting economic growth. Today, Americans purchase about 25% of the $18 million worth of annual clothing exports. An unnamed labor-rights advocate familiar with the upcoming announcement said trade privileges will be restored if Bangladesh can adhere to a road map that, presumably, lays out achievable but notable shifts in the country's labor practices. Stay tuned for more updates as news continues to break throughout the day. (The New York Times) 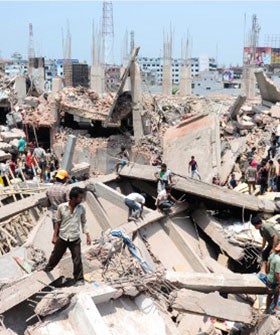 Image: Via The Clean Clothes Campaign.

Advertisement
Fashion
Rihanna’s New Fenty Capsule Collection Is Full Of Power, Strength...
Bad news: the wait for Rihanna’s next album continues. But, Riri is dropping some other new stuff while we’re under quarantine. On Instagram, she revea
by Alexis Reliford
Coronavirus
Here’s Where You Can Buy Non-Medical Face Masks Online Righ...
It seems like each new day of the COVID-19 pandemic comes with a hearty dose of surprising, overwhelming, and sometimes even conflicting information about
by Amanda Randone
Sales
Everlane Just Extended Its Sitewide 25% Off Sale
by Amanda Randone
Style
We’re Trading In Our Lace-y Thongs For Something A Little M...
by Eliza Huber
Style
3 Women On The Joy Of Making Your Own Clothes
Before the boom of ready-to-wear fashion, every piece of clothing someone owned was made for the individual, either themselves or by someone they knew. Now
by Georgia Murray
Style
#JacquemusAtHome Is The Best Thing On Social Media Right Now
I don’t know about you guys, but for me, social media has been anything but a comfort these days. I know, I know, TikTok is supposed to be the ultimate f
by Eliza Huber
Hype Machine
These Are The Top-Rated Indoor Footwear Styles On The Internet
by Amanda Randone
Deals
So Many Dresses On Free People Right Now Are 50% Off
In this unexpected era of work-from-home attire and perpetual pajama days, the thought of putting on something like actual pants or a dress is quickly losi
by Amanda Randone
Beauty
Treat Yourself To Some Luxury With This Major Saks Sale
by Karina Hoshikawa
Style
Is Your Homemade Face Mask Effective?
Last week, when Governor Andrew Cuomo of New York called on businesses “to get creative” regarding ways to help during the coronavirus pandemic, NY-bas
by Eliza Huber
Most Wanted
Etsy Shared The Top Jewelry Trends People Are Searching Right Now
What is the purpose of accessories if not to decorate our outsides with little hints about who we are on the inside? Jewelry has the power to say a lot abo
by Amanda Randone
Style
Aritzia’s Thanks To You Sale Has Already Raised $3 Million
by Eliza Huber
Discover
R29 Stories & News
Watch
R29 Original Series & Films
Shop
R29's Most Wanted