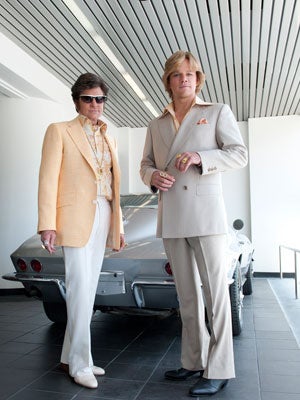 Behind The Candelabra, the Steven Soderbergh movie about the glamorous but closeted life of Liberace, may be Michael Douglas' moment to (literally) shine, but the wide-eyed performance of Matt Damon makes sure the viewer never forgets it's through his character's eye you witness the story. Based upon Scott Thorson's autobiography about his time as Liberace's live-in lover, the made-for-TV flick is already garnering serious critical steam.
Premiering on HBO Sunday, the movie was originally intended to be a theatrical release, but no studio would finance it. In fact, director Soderbergh has come forward and said that studios believed it was "too gay," and they didn't know how to market such an overtly homosexually themed film. But that didn’t keep it from making its world premiere at Cannes last week.
Advertisement
A Boston native, Damon dropped out of Harvard just before graduating because he thought his first movie, Geronimo: An American Legend, was destined to be a big hit. Behind The Candelabra has him reuniting with his longtime collaborator Soderbergh for the eighth time — after the Oceans trilogy and hits like Contagion and The Informant.
The Oscar-winning screenwriter has a full schedule in front of him, appearing in George Clooney’s Oscar hopeful, Monument Men at the end of the year, as well as Neill Blomkamp’s follow up to District 9, Elysium. But for now, he is still letting his Brazilian tan lines fade and hoping the film crew can "unsee" his bronzed backside, which, as he tells us, was a major concern of his.

Did you know Liberace? Had you ever heard of him?

“Yeah, of course I’d heard of him. I was born in 1970, so throughout the '70s there’d be specials on television, so you would see him. But he was a less of a presence in my life than he was in my mother’s. My mother told me that they would sit around and they would watch him. My grandmother was an excellent piano player and she absolutely loved watching him play. So whenever he was on, they would stop everything and watch.”

What’s it like to be in bed with Michael Douglas and have him tell you you’re snoring?


“I now have things in common with Sharon Stone and Glenn Close, we can all go out and trade stories, Demi Moore, y’know.”
Advertisement 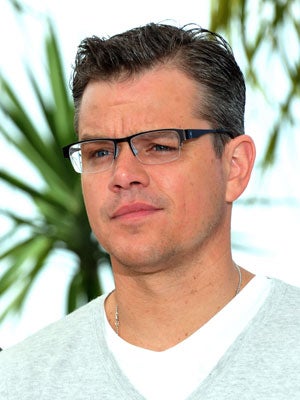 Did it ever get awkward?


“We were trying to do this scene where we wanted it to be — it’s an argument. And I explained to him in this parking lot in West Hollywood about my Brazilian tan line that I had to get to make some of the outfits fit and not show a tan line. Steven sat there listening and I said, ‘It would be really great - it’s the wrongest thing you’ve ever seen, but what if by the end of the thing I drop the robe and get into bed and you see the Brazilian tan line?’ And Steven just looked at me for a long time and said, ‘Oh, I know where to put the camera.’ So I’m really proud of that scene cause it’s thrown away. And my behind is very large in the frame but it’s out of focus cause the focus was thrown deep to Michael. Cause I’ve worked with this whole crew seven times, I did warn every guy on the crew, this is not something you can unsee. So you’re all welcome to look, but you can’t unring that bell, so I’m just warning you. It will be seared into your memory if you choose to look.”

The two characters undergo a lot of cosmetic surgery. How did you change your outward appearances?


“As Michael alluded to the tests that we did, we had some great prosthetics people and we had a whole kind of plan of these different looks. I had cheeks that were made, a chin, a nose. My first look, I had dental plumpers in my mouth to kind of give myself a kind of more youthful appearance and then we pulled them out with the plastic surgery looks. We were gauging our weight and diet with our clothes, and kind of making everything fall the way it should fall. It was a big kind of group effort cause again we only had 33 days to do it. And we were jumping around. Sometimes we’d do three different looks in a day.”
Advertisement

Did you meet with Scott?


“I did not talk to Scott before — I talked to Steven about whether or not I should and we just decided it would just be better...we got everything we needed from his book. And I think meeting him before I did it, 30 years after this all happened, wouldn’t have been helpful necessarily.”

Why do you think their relationship became so vitriolic in the end?


“The guys who were around them at the time referred to it as a marriage. They said, ‘Look, it was a marriage.’ Had it been a relationship between a man and a woman it would have been a marriage and they would have parted and there would have been some agreement and none of this stuff would have blown up in the press. But Scott becoming addicted to drugs and being desperate for money, y’know, it all had to play out the way it played out in large part because they weren’t allowed to live out in the open.”