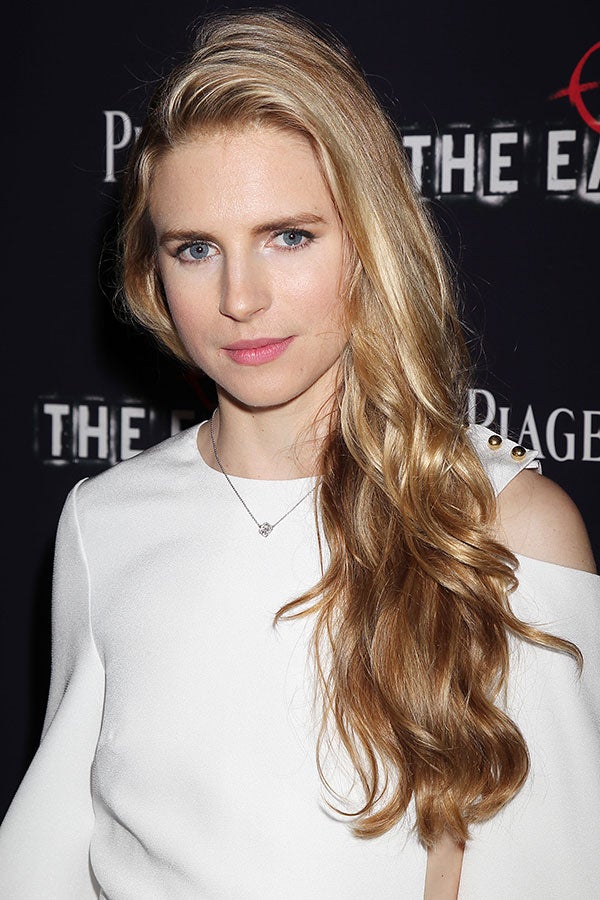 Though we cast her as a strong candidate for Robert Pattinson's next love interest, Brit Marling is the antithesis of a woman ready to play the role of girlfriend — or any accessory to a man. Probably due to the fact that Marling is a total babe, when she started acting, she was only offered roles that were all sauce and no substance. So, to defy the typecast, she taught herself to write for film, and after her first effort, nailed it. Since writing and starring in Another Earth, Marling continues her sci-fi career with The East, in which she goes undercover in an anarchist group. And because Marling joins Alexander Skarsgård of vampire fame and Ellen Page of the X-Men , we had to find out if Marling was prepared to take on a nerd-following. So, we caught up with Marling at the New York screening of The East, sponsored by Piaget, to find out.
Advertisement

You've had a heavy hand in science fiction, and we wanna know: Do you consider yourself a geek?
"I'm a total geek. I love the geeks! I would hope that the geeks consider me one of them. I think people that are curious and interested in the world and like to read and talk about ideas are cool people."

Do you have any nerdy crushes on a superhero or fictional character?
"Yeah! Don't you think The Princess Bride is kind of a geeky movie to love? I'm obsessed with that movie. I want to marry Inigo Montoya. 'You killed my father. Prepare to die.' That guy had a lot of integrity. And I love a guy with integrity."

The East premieres May 31.

Style
24 Black Influencers That You Should Be Following
by Eliza Huber
Style
Sophia Bush Is Selling A Look From One Of Her “Absolute Fav...
Like many of us, Sophia Bush is using her free time in quarantine to Marie Kondo her wardrobe, but, unlike the items gathering dust in the back of our clos
by Eliza Huber
Style
Hailey Bieber’s Reformation Dress Is Perfect For Summer — &...
This year Memorial Day Weekend wasn’t all parades and barbecues like we’re used to, but, even with the change of plans, Hailey Bieber found not one, bu
by Eliza Huber
Style
Here’s What Your Favorite Celebrities Wore During Memorial ...
by Eliza Huber
Style
7 Meghan Markle-Approved Fashion Brands That Are Also Affordable
by Eliza Huber
Style
Olsen Twin Sets The Bar For Social Distancing Style
From their pastel-colored lenses and bandanas circa 2000 to the black shapeless frocks they’re known for today, the Olsen twins have been our style icons
by Eliza Huber
Style
Meghan Markle’s Go-To Dress Is 50% Off At Nordstrom
We’ve learned every TikTok dance, box-dyed our hair pastel pink, and watched all 12 episodes of Normal People — twice. Next on our list of distractions
by Eliza Huber
Fashion
Villanelle Is A Carrie Bradshaw For Our Disillusioned Generation
Sex and the City’s Carrie Bradshaw walked so Killing Eve’s Villanelle could run. Sure, Bradshaw can be considered a predecessor to many of TV’s antih
by Cait Munro
Style
Meghan Markle Just Gave This ‘90s Jewelry Trend Her Stamp Of Appr...
Summer is almost here, and with it, comes all of our favorite kitschy, nostalgic accessory trends: seashell jewelry, fruit-shaped handbags, rhinestone-crus
by Eliza Huber
Style
Here’s What You Would’ve Seen On The Met Gala Red Carpet Last Night
by Eliza Huber
Celebrity Style
Meghan Markle’s Baseball Cap Marks The Beginning Of A New Era
It’s only been a month since Meghan Markle and Prince Harry swapped out their Sussex digs for a house in the Hollywood Hills, but they already look like
by Eliza Huber
Style
Pillows For Spring: Groundbreaking
If you, like us, have been receiving near-constant reminders from your phones that screen time is at an all-time high, you’ve probably already caught a g
by Eliza Huber
Discover
R29 Stories & News
Watch
R29 Original Series & Films
Shop
R29's Most Wanted