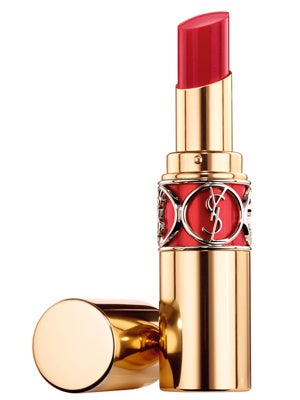 Our proverbial hats are off to flight attendants. After all, not everyone has the fortitude to deal with everything that could go wrong on a flight: possible equipment malfunctions, the occasional belligerent passenger, and that weird rubbery chicken served at 35,000 feet. But, lipstick? That's never seemed like a problem — but Turkish Airlines believes otherwise.
Turkey's national airline, which is also Europe's fourth largest carrier, has banned its crew members from wearing red lipstick and nail polish. It's an attempt, according to the airline, to keep its in-flight staff "artless and well-groomed with makeup in pastel tones." That, and it doesn't match the overall ensemble. "As a consequence of our current cabin uniforms not including red, dark pink, et cetera, the use of lipstick and nail polish in these colors by our cabin crew impairs visual integrity," the airlines said in a statement.
Advertisement
While we're normally all for harmonious makeup-fashion pairings, and private companies can create a dress code, this direction is raising our eyebrows. Because, as the airline's critics have pointed out, this decision seems less about smart policies and more about controlling the appearance of its female workers. What's more, this is a state-run airline, and some secular critics worry that the restriction is a sign that religion is playing too strong a role in politics.
"I've never heard of a plane crashing because of a women's lipstick," said one passenger. Neither have we — and we hope this ban is overturned so that flight attendants can focus on more important issues. You know, like the guy in 12C who refuses to wear his headphones. (Reuters)

Like this post? There's more. Get tons of beauty tips, tutorials, and news on the Refinery29 Beauty Facebookpage!
Advertisement

Makeup
I Tried The Charlotte Tilbury Bronzer With A 5,000-Person Waitlist
Some people are opting out of wearing makeup entirely during quarantine, while others are discovering psychological benefits in applying some concealer or
by Thatiana Diaz
Makeup
The 8 Best Mascaras For The Most Sensitive Eyes
by Thatiana Diaz
Most Wanted
Today Is The Last Day To Shop Fenty Beauty’s 25% Off Sale
This is not a drill: If you didn’t already get your shop on over the weekend, today is the last day of Fenty Beauty Friends & Family Sale, where
by Karina Hoshikawa
Most Wanted
Chipotle’s Unlikely Beauty Collab Is Exactly What We Need R...
Amidst all the daily uncertainty and pandemic-related notifications lighting up our phones, a lighthearted bit of news broke today that is destined to chee
by Karina Hoshikawa
Coronavirus
What A Makeup Artist Wants You To Know About Her Industry’s...
While many are now well-accustomed to (and subsequently complaining about) working from home, millions of people have lost their jobs and don’t have the
by Kathleen Newman-B...
Beauty
19 Latinx-Owned Beauty Brands To Support Right Now
by Thatiana Diaz
Beauty
9 Cute Makeup Bags To Store Your Beauty Products At Home
by Erika Stalder
Makeup
8 Tinted Moisturizers Our Editors Love For Video Calls & Beyond
by Thatiana Diaz
Makeup
Rihanna Goes Cheeks Out & Shots Down In The Rowdiest Beauty Tutor...
If you’ve ever wondered what it would be like to get drunk with Rihanna, now you can (sort of) find out for yourself (without being Seth Meyers). Instead
by Lydia Wang
Makeup
The Best Pink Eyeshadow Palettes To Try This Spring
by Karina Hoshikawa
Beauty
Cream Bronzer Is The Key To Faking A Sun-Kissed Glow
by Megan Decker
Makeup
9 Colorful Eyeshadow Palettes That Will Instantly Brighten Your Day
by Karina Hoshikawa
Discover
R29 Stories & News
Watch
R29 Original Series & Films
Shop
R29's Most Wanted