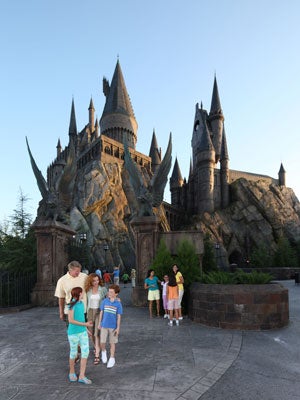 Star maps are about to get a new addition. According to a recent press release from NBCUniversal, Harry Potter and the Hogwarts gang are dropping their broomsticks in L.A. — Universal Studios Hollywood, to be exact. It's a smart move: Long after the final installment, muggles the world over are still making their pilgrimage to the magical mecca in Orlando, Florida. But now, between window shopping on Rodeo and TwitPic-ing the Santa Monica Pier, tourists can add "Flight of the Hippogriff" and lunch at Three Broomsticks to their itineraries.
Of course, with big-city change comes criticism, and the Potter project has hit backlash from Angelenos — especially fans of The Gibson Amphitheatre. The storied music venue (along with the Curious George attraction) will be shuttering in light of the company's 25-year Evolution Plan, which includes summer construction of said wizard wonderland. We're bummed to see this landmark replaced — but, if chocolate frogs from Honeydukes don't sway naysayers, nothing will!