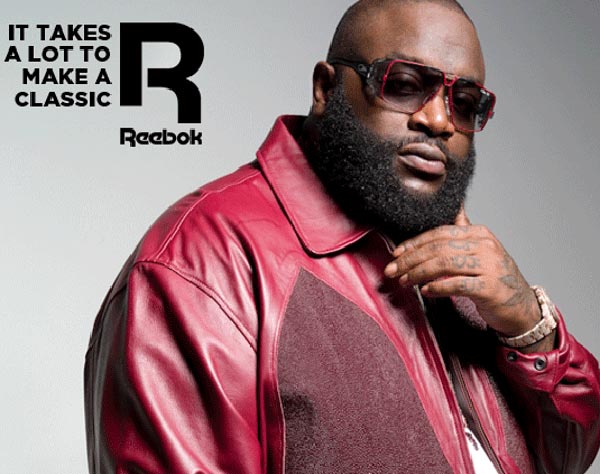 Rick Ross was the subject of a drawn-out controversy recently, due to some very offensive lyrics. As the outrage grew and grew, former fans and long-time haters alike demanded that Reebok, which hired Ross as a spokesperson before the lyrics came out on "U.O.E.N.O.," drop him from the brand. And now, they've done just that.
Part of the ridiculousness of the situation comes from the fact that Ross did not even try to understand where his critics were coming from, and issued something that was less like an apology and more like a slap in the face (he called it a misinterpretation, but the meaning feels pretty clear). Reebok issued the following statement: "While we do not believe that Rick Ross condones sexual assault, we are very disappointed he has yet to display an understanding of the seriousness of this issue or an appropriate level of remorse."
Hopefully, Rick Ross will take this as a learning experience, and try to do more positive things with his lyrics in the future. Either way, we're glad such an important brand is taking a stand against this kind of language. As the saying goes, money talks. (Vulture)

Style
Katie Holmes Paired Her Go-To “Ugly” Sandals With Thi...
If you thought the cut-out trend would fade out soon, think again. On Sunday, during a coffee break in Manhattan, Katie Holmes was spotted giving the stree
by Eliza Huber
Celebrity Style
Could You Walk In Lady Gaga’s Ultra-High Platform Boots?
On Monday, the singer stepped out in her hometown wearing a pair of sky-high platform shoes from Pleaser, paired with a black Magda Butrym A-line dress and
by Frances Solá-Sant...
Celebrity Couples
J.Lo Steps Out With A Necklace That Makes Bennifer Official-Official
As if their steamy makeout photo wasn’t enough proof that Jennifer Lopez and Ben Affleck are in fact back together, the newest addition to Lopez’ jewel
by Eliza Huber
Advertisement
Style
What Does It Mean That Carrie Bradshaw Is Wearing Her Flower Pin ...
Over the weekend, the cast of the Sex And The City reboot, And Just Like That, was spotted in full fashion form at the Manhattan School of Music in Morning
by Eliza Huber
Celebrity Style
Issa Rae’s Surprise Wedding Included Two Vera Wang Dresses
On Sunday, Issa Rae married her longtime partner Louis Diame. She wore a custom Vera Wang wedding dress that made the actress look like a real-life princes
by Frances Solá-Sant...
Celebrity Style
Dua Lipa Paired A Neon Suit With This Season’s Hottest Swim Trend
Who says you have to be any wear near a body of water to wear a bikini top?  On Friday, Dua Lipa shared her latest night-out look on Instagram, includ
by Frances Solá-Sant...
Style
Got $2,000? If So, Have You Considered Buying Lady Gaga’s I...
Inauguration Day was packed full of show-stopping looks — from Kamala Harris’ purple Christopher John Rogers dress to Ella Emhoff’s Miu Miu coat and
by Eliza Huber
Style
Lady Gaga Just Wore Two Of Summer’s Biggest Swim Trends
Twelve years after she emerged from a swimming pool in latex for the ”Poker Face” music video, Lady Gaga is back to her old ways. On Wednesday, the “
by Eliza Huber
Celebrity Style
Margot Robbie’s Latest Look Includes Statement Shoulders & Cut-Outs
The summer of skin is well underway, but actress Margot Robbie is doing her best to support the puffy shoulder-pad trend.  On Wednesday, the I,Tonya a
by Frances Solá-Sant...
Britney Spears
What Britney Spears’ Style Taught Me About My Own Coming Of Age
In the wake of the Framing Britney Spears documentary and with the #FreeBritney movement gathering momentum, the world is revisiting the various dehumanizi
by Frances Solá-Sant...
Style
Ashley Graham’s Latest Style Muse? Steve From Blue’s Clues
On Monday, Ashley Graham took to Instagram to share the inspiration behind her most recent look: Steve from Blue’s Clues — and no, we’re not kidding.
by Eliza Huber
Celebrity Style
Chain Belts Are Trending, Thanks To Olivia Rodrigo
Reigning queen of the ‘90s style comeback Olivia Rodrigo has championed many trends from the decade — including slip dresses, combat boots, and opera g
by Frances Solá-Sant...
Advertisement
Advertisement
Discover
R29 Stories & News
Watch
R29 Original Series & Films
Shop
R29's Most Wanted