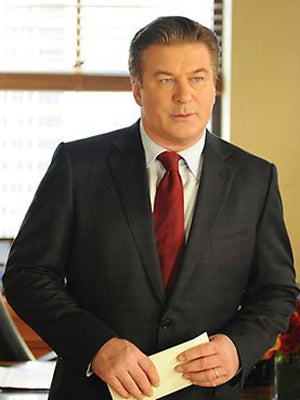 We're predicting it first: 2014 will be the return of genius late-night television. Leno has already relinquished his Tonight Show throne to Jimmy Fallon, consequently sending the show back to its hometown glory of 30 Rockefeller Studios. The grapevine is speculating that "Weekend Update" favorite, Seth Meyers will replace Fallon's seat at Late Night, and today we're catching wind that Alec Baldwin is in early talks with NBC about hosting Last Call With Carson Daly.

For 12 seasons (yeah, 12), Daly has quietly been at the helm of the 1:35 a.m. half-hour slot. (In other words, the TV equivalent to a nightcap after a solid evening out.)
The New York Times reports that, according to an anonymous NBC exec, the Emmy-winning actor is in the mix of potential Daly successors. Baldwin doesn't have to prove his comedic chops to the network as Lorne Michaels has already made him the top host of SNL (a whopping 16 stints) and brought him to primetime with the introduction of Jack Donaghy and 30 Rock. Baldwin has been honing his interviewing skills with his weekly New York podcast, Here's The Thing, which runs half of an hour like Last Call. A Daly/Baldwin turnover would be ideal for the actor, who's been starring in Broadway's Orphan, as the show doesn't run for an hour like The Tonight Show does.

Fallon's switch has already been confirmed, but if the other two come into fruition, SNL will have officially taken over late-night television — and you can bet we'll happily down an extra coffee or two in the morning to catch this power house of a lineup. (Vulture)

Style
These Are The Best Emmys Looks Of All Time
by Eliza Huber
Style
These Celebs Won Best Dressed At The Emmys, Even Without The Red ...
by Eliza Huber
Fashion
Zendaya Won The Emmy Awards With Her Red Carpet Looks
Red carpet or no red carpet, Zendaya is taking her unofficial role as queen of only wearing showstopping looks very seriously. The Emmys might not be in pe
by Sarah Midkiff
Fashion
Regina King Changed Her Emmys Outfit To Make An Important Statement
Regina King used her spotlight at tonight’s Emmy Awards to pay tribute to Breonna Taylor and the Black Lives Matter movement. Rather than donning a
by Sarah Midkiff
Fashion
Tracee Ellis Ross Matches Her Mask To Her Dress At The Emmys
It’s official. Tracee Ellis Ross has proven that masks can be a focal accessory in any red carpet look. Never before has PPE looked so fashionable and re
by Sarah Midkiff
Style
Kamala Harris’ Timberlands-Pearls Combo Has Our Vote
On Tuesday, Senator Kamala Harris was in Nevada for a community roundtable, where she discussed the disproportionate impact that COVID-19 has had on Latino
by Eliza Huber
Style
Kate Middleton Rewore A Dress & Mask — & They Look Even Better To...
Apart from the whole Duchess thing, we like to think we’re not all that different from Kate Middleton. This was made easier when she was spotted on her w
by Eliza Huber
Style
Naomi Osaka Wore A Mask Honoring Tamir Rice Ahead Of US Open Win
Update: After wearing face masks with the names Breonna Taylor, Elijah McClain, Ahmaud Arbery, Trayvon Martin, George Floyd, and Philando Castile written o
by Eliza Huber
Style
Sofia Richie Wears The Biggest Trends Of The ‘00s In Kappa x Juic...
The phrase “that’s hot” might be the first thing that comes to mind upon viewing Sofia Richie’s latest campaign. Why? Created for the popular ‘00
by Eliza Huber
Style
Cate Blanchett Is Rewearing Red Carpet Looks For The Venice Film ...
As we approach the start of (a very different) award season, we can’t help but wonder about the sorts of statements that will be made on the red carpet.
by Eliza Huber
Style
Lady Gaga’s 9 Face Masks Won Her Best-Dressed At The VMAs
by Eliza Huber
Style
Gloria Steinem Gave Meghan Markle A Bracelet With A Special Message
Earlier this week, Meghan Markle had feminist icon Gloria Steinem over, in her backyard in Montecito, California. During the talk, which was recorded, the
by Eliza Huber
Discover
R29 Stories & News
Watch
R29 Original Series & Films
Shop
R29's Most Wanted