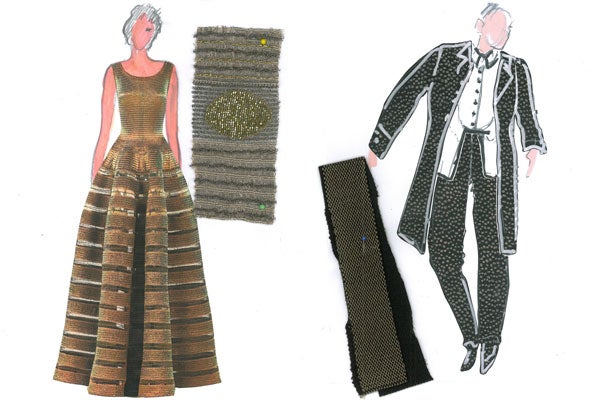 Who needs Wilshire Boulevard when the L.A. Philharmonic has a history of pulling fashion's most exclusive (and reclusive) designers to helm its costume department? If you recall, Kate and Laura Mulleavy sketched and sewed those stunning pieces for Don Giovanni last year. Truth be told, it wasn't just the superb stage performances that gave us goose bumps: It was the stunning display of runway-worthy gowns, and — oh, about 130,000 Swarovski crystals.
For the concert hall's second act: Azzedine Alaïa is taking the reigns for its rendition of Marriage of Figaro. Alaïa, who is quite the man of mystery, will craft costumes for the full cast of soloists (half of which are men). Not only was his decision to partake in such a public venture (pleasantly) surprising, so was the choice to arrange the attire for the gents — he's renowned for his womenswear, after all! But, don't fret — the designer hasn't abandoned his editor-approved approach altogether — we spy some familiar fabrics and silhouettes in the preliminary design drafts.
The play is part two in a trilogy of L.A. Phil’s Mozart and Da Ponte project. We're already placing bets on which designer the DTLA landmark will bag next (to be announced next May), so feel free to participate in the fun! You can catch Marriage of Figaro on Friday, May 17; Sunday, May 19; Thursday, May 23; and Saturday, May 25.

Advertisement
Entertainment News
Alyssa Milano: The Next Phase of the #MeToo Movement? Justice
Harvey Weinstein is a rapist. Not “alleged.” Not “accused of sexual misconduct.” Not “some women claim.” Weinstein walked into a Manhattan cour
by Alyssa Milano
TV Shows
I Am Not Okay With This Stars An IT Girl & Other Up...
by Martha Sorren
TV Shows
Yes, Tom Sandoval Was In Jax’s Vanderpump Rules Wedd...
Fights are pretty commonplace among the Vanderpump Rules gang — these folks will fight about any and everything if given the opportunity. However, it see
by Ineye Komonibo
Music
Billie Eilish’s Brother Responds To Claims That They’...
After skyrocketing to fame with their 2019 album When We All Fall Asleep, Where Do We Go? Billie Eilish and her producer brother Finneas swept the 2020 Gra
by Kaitlin Reilly
Entertainment News
Bachelorette‘s Chad Johnson Arrested For Robbery & D...
Former Bachelorette contestant Chad Johnson, who appeared on JoJo Fletcher’s season of the dating competition as well as Bachelor In Paradise in 2017
by Kaitlin Reilly
TV Shows
Season 18 Of Keeping Up With The Kardashians Is On The Hor...
There’s a new season of Keeping Up With the Kardashians around the corner and it features some of the key elements that have kept the reality TV family t
by Kaitlin Reilly
Movies
These Movies That Will Remind You What It Truly Means To Be Cold
by Refinery29 Editors
Entertainment
“Mercy” Singer Duffy Says She Left Limelight After Be...
After an extended hiatus of over a decade, Welsh singer Duffy (real name Aimee Duffy) is explaining why she has been out of the public eye for so long. In
by Ineye Komonibo
Movies
Thought You Left The Nightmare Of Candyman Behind? Not On ...
When many of us were first introduced to Oscar winner Jordan Peele, it was through the Comedy Central sketch show Key & Peele, which also starred his b
by Ineye Komonibo
Best of Netflix
6 Inside Secrets From The Set Of Netflix’s New Teen Superhero Sho...
“It’s kinda like a Ladybird meets X-Men,” Sofia Bryant tells reporters from a production office somewhere in Pittsburgh on a sunny day in July 2019.
by Ariana Romero
TV & Netflix
Netflix’s New Original Limited Series Wants You Remember Ma...
Over the course of the last two years, Netflix has been quietly working on an original series that would explore the personal and professional life of Mada
by Ineye Komonibo
TV Shows
Pete Davidson Saved All His Ariana Grande Shade For His New Stand...
Since their split almost a year and a half ago, Pete Davidson has only had nice things to say about Ariana Grande. On Saturday Night Live back in November
by Kathryn Lindsay
Discover
R29 Stories & News
Watch
R29 Original Series & Films
Shop
R29's Most Wanted