Skip navigation!
Story from Celebrity Style
Typically, when we start an R29 story with "celebs, they're just like us!" it's because a gorgeous model was spotted at a supermarket, or a reality star shared a candid via Instagram. But, when it comes down to it, we rarely connect with these public figures on a more intimate level. Whether A-listers opt to keep real-life issues like illness and death under wraps for personal reasons or to avoid being seen as vulnerable, in truth, we never hear about real heartbreaks, unless they involve divorce papers.
So, when Dax Shepard shared an homage to his late father via Tumblr, we did more than shed a tear — we felt a sense of camaraderie. No longer was this multimillion-dollar earning actor up on a pedestal. He was down to earth, sharing the emotions and experiences that define his humanity.
Advertisement
Like anyone else, his father wasn't perfect. And, as is so often the case, there was a tense relationship between father and son. But, cancer struck — and, unlike many people, Shepard had a career with commitments in Hollywood to focus on, and his father refused to relocate from Detroit to L.A. Oh, and his wife was expecting. As Shepard put it, "Whoever was writing my life couldn’t figure out which storyline they wanted to tell, and decided to tell them all at once."
The details of his father's last few days are incredibly identifiable for anyone who has experienced cancer — whether for themselves or through a loved one. The recounting of his hospital visits and the tiny pockets of hope via road trips and impromptu diner visits are feelings that are all too common in the oncology ward, and Shepard spares no honest moment. For that, we extend our most sincere kudos to date — thank you, Dax Shepard, for putting into words what you could have easily chosen to hide. It's a beautiful thing, really.
We encourage you to read the blog regularly (with Kleenex in hand, this go-round) not only for his open-diary approach, but for his tongue-in-cheek prose as well — that post on Adrien Brody is guaranteed to make you giggle, if you need a touch of levity afterward. (Tumblr) 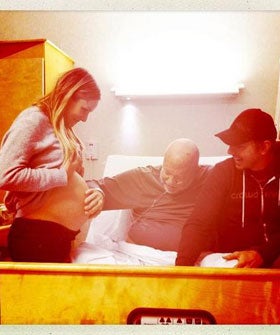