Chloë and Chloé — try saying that five times fast. Well, accents were on an incessant flip mode last night as guests turned out to fete Chloé's 60th anniversary at Barneys New York — hosted by none other than Miss Chloë Sevigny herself.
We couldn't help but over-Insta our surroundings: La maison du Chloé remastered 16 of its iconic pieces for the Chloé Edition Anniversaire special collection, including past creations by Karl Lagerfeld, Phoebe Philo, and Stella McCartney, now available at select Barneys. But, even with all the eye candy, it was the other Chloë who stole the show in an eye-catching, cut-out dress (by her namesake, natch) and a sleek asymmetrical 'do.
Advertisement
Between copious amounts of cotton candy and model gazing (Caroline Winberg, Martha Hunt, Tilda Lindstam, and Hanne Gaby Odiele were spotted next to screens playing a loop of the label's throwback runway shows), we managed to snag Chloë for a quick Q&A. She let us in on her love for the French label, as well as a shoe closet that puts Jenna Lyons' to shame. Oh, and remember Chloë's Chloé ads? We know, this double name thing is confusing us, too.
How did you get involved with Chloé's 60th anniversary? "You know, they just called and said, 'We have our 60th anniversary coming up and we're going to do a party in New York, would you be interested in hosting?' I said, 'Of course.' I've worked with the brand in all different capacities, from wearing it and going to the shows, to doing the perfume campaign years ago. Of course, it's my name, just with different accents. But, this is really Chloé — I'm Chloë."

So, Chloë, do you wear a lot of Chloé?
"I have over the years. Yeah, I always wear it. Chloé is so romantic to me, it's so soft and feminine. There's such a consistency — regardless of the designer — over the years."

How do you put your Chloë twist on Chloé?
"I don't — very much!"

Someone told me you once collected Chloé perfume bottles? "I did...well I collected perfume bottles as a child. That's what I collected, and I was always getting Chloé constantly, so I had all kinds of powders, containers, and lotions. I had so much Chloé stuff you wouldn't even believe it."
Advertisement

Click through to the next page to see Sevigny's old Chloé perfume ad...and read about her not-too-shabby shoe collection! 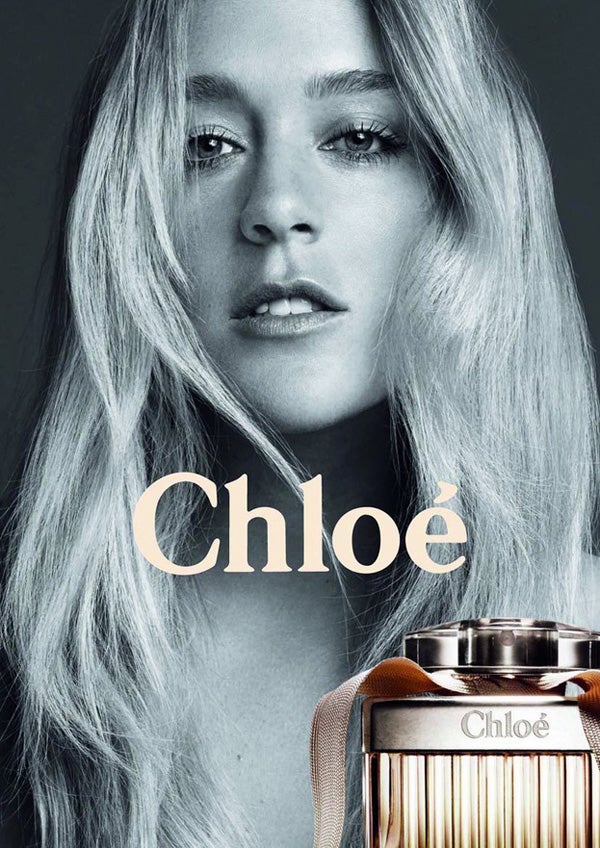 Speaking of shoes, how many do you think you have? Jenna Lyons recently confessed she had over 289 pairs... "So, it's embarrassing — I have way more than that. I don't know, maybe 2,000?"
Where do you keep them all? "I have a storage space in Connecticut."
Wow, that's crazy! Do you ever give some away? "Yes. But, if it's a little black bootie, I always save it."

So, basically, you keep the essentials?
[Points to her shoes.] "These are old Chloé from like, four years ago."

Photo: Courtesy of Chloé.
Style
Shailene Woodley Debuted Her Engagement Ring — & It’s A Sho...
Despite having never expected to marry someone who “throws balls for a living,” that’s exactly what Big Little Lies actress Shailene Woodley is prepa
by Eliza Huber
Style
If You Thought Connell’s Chain Was Hot, Wait Until You See ...
When I first prepared to watch Normal People on Hulu, I had a lot of expectations. I’ve read the book many times; my copy is tattered and covered in note
by Eliza Huber
Style
Paris Hilton’s Engagement Ring Proves This Shape Isn’...
On Wednesday, People confirmed that Paris Hilton and her boyfriend of one-year, venture capitalist Carter Reum, are engaged. Alongside the announcement, th
by Eliza Huber
Style
In Lockdown, Emma Chamberlain Perfected Personal Style
“This has been the biggest year of style development for me ever,” says Emma Chamberlain. “I’ve always loved clothes, but my life before [the p
by Eliza Huber
Style
Megan Thee Stallion & Doja Cat Wore Matching Lingerie In Ariana G...
As if one music video wasn’t enough of a daily reminder to drink coffee and eat healthy (to keep it squeaky, of course), Ariana Grande released a second,
by Eliza Huber
Fashion
Lana Condor Wears Aritzia, Forever 21 & Lots Of Vintage In To ...
Warning: Spoilers for To All the Boys: Always and Forever ahead. In a bittersweet moment, the final Netflix movie adaptation of Jenny Han’s popular YA bo
by Fawnia Soo Hoo
Celebrity Style
Slipper Boots Are This Season’s Most Popular Trend — Just A...
On Tuesday, Selena Gomez was spotted on the set of her new Hulu comedy series Only Murders in the Building, about three true crime-obsessed New Yorkers tha
by Eliza Huber
Style
Serena Williams’ Asymmetric Catsuit At The Australian Open Was In...
On Sunday, while over 96 million people were watching the Super Bowl, Serena Williams was across the world in Melbourne, Australia, playing in the first ro
by Eliza Huber
Style
Miley Cyrus Took A Cue From Harry Styles For Her Super Bowl Look
On Sunday, Miley Cyrus joined Billy Idol for TikTok’s Tailgate Super Bowl pregame live stream, where the duo performed hits including Blondie’s “Hear
by Eliza Huber
Style
Kate Middleton’s Repeat Outfit Proves That This Classic Nev...
On Tuesday, Kate Middleton logged onto Zoom to speak with teachers at a local school in honor of Children’s Mental Health Week. For the occasion, the Duc
by Eliza Huber
Style
Amanda Gorman’s Time Dress Mirrored Her Inauguration...
On Thursday, Time published an interview between Amanda Gorman, inaugural poet-turned-fashion star, and former First Lady Michelle Obama, as part of its ?
by Eliza Huber
Fashion
Even In Black & White, Law Roach’s Costumes Shine In Malcolm &...
From playing a 19th-century trapeze artist in The Greatest Showman to a young woman struggling with addiction in Euphoria, Zendaya’s acting has range
by Irina Grechko
Discover
R29 Stories & News
Watch
R29 Original Series & Films
Shop
R29's Most Wanted