Skip navigation!
Story from Celebrity Style
With shopping sites churning out content and publications launching e-commerce (like our own), it's harder these days to find a successful fashion website that doesn't combine the two. Today, one of the greats in online shopping, Net-A-Porter, will dip its manicured toe into the content pool and create its own magazine. Net-A-Porter has had an online magazine of some form for awhile (most recently under the moniker, "The Magazine," but now it's been given a real, glossy-sounding name.
Titled "The Edit," the online magazine will run once a week and plans to create a yet-to-be-named print version later this year (according to WWD, the the print edition will compete with Vogue and Harper's Bazaar). With advertisement, originally shot editorials, and a variety of languages, The Edit is a bona fide magazine in every way, even with an old-guard editor-in-chief topping its masthead (Lucy Yeomans was the former EIC of British Harper's Bazaar).
Advertisement
The difference between it and traditional fashion magazines will the be specialized intel that Net-A-Porter receives from its consumers — knowing exactly what its fans are buying full price, shopping for on sale, asking about when sold out, and passing over on the digital racks is key to creating a resourceful magazine for its readers — and a lucrative one for its salespeople. That's what we call having beauty and brains. (WWD) 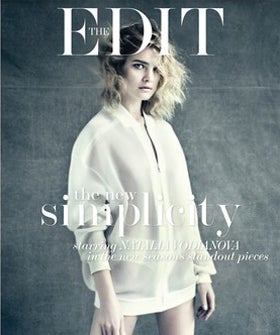