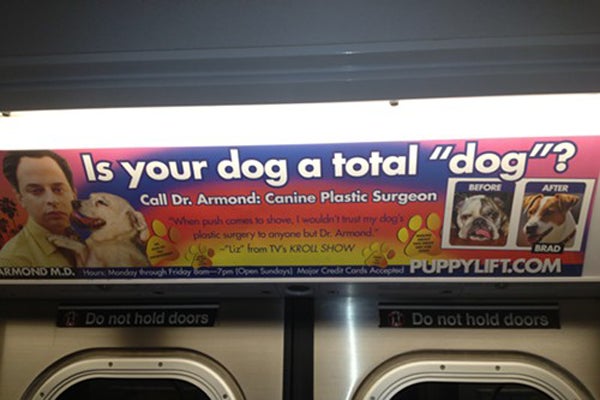 Ah, the infamous Dr. Zizmor. Anyone who's spent a hot minute on NYC public transport knows the name, but for those who don't, he's a self-proclaimed miracle worker who wants to wipe your acne away with his groundbreaking treatments and majorly low-budget advertising, featuring Clip Art rainbows and thank-you notes from very dour teens. The timelessly hilarious ads have inspired many a parody (including this R29 staffer's Halloween costume), and one in particular caught our eye this morning on the subway.
A quick round of Googling revealed the truth behind this outrageous offering or canine plastic surgery: It's a parody promoting a new series on Comedy Central, The Kroll Show, in which comedian Nick Kroll takes on various personalities à la Sacha Baron Cohen. We're pretty happy to know that puppylift.com isn't actually a real thing (you'll be redirected, don't worry) — and judging by the video, this show is about to be pretty hilarious. Check it. Woof. (The L Magazine)

Image via The L Magazine; Video courtesy of Comedy Central.