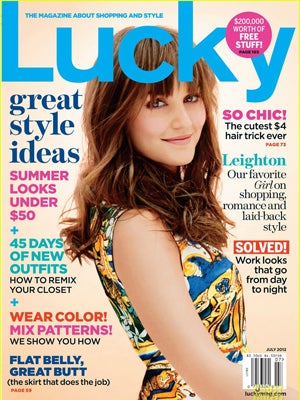 It takes guts to move to New York to pursue your career — as many films, TV shows, and songs have told us. Yet, in the media industry (and we're biased here) the going is particularly tough. We live in tiny rooms subsisting on cheap noodles until we get what we came for — a demanding, fast-paced, and hopefully rewarding job. So, when we hear about someone who has taken the plunge, landed the job that J-School grads dream about, and walked away, we sense some major chutzpah. Former Lucky editor Lauren Sherman did exactly that when she left her post as Executive Editor at LuckyMag.com.
Advertisement
After leaving her position at Lucky, Fashionista revealed that Sherman would return to the site as their editor-at-large on December 19. Sherman helped blaze the way at Fashionista, and in her new title, she can help maintain the site while also returning to her roots as a freelance writer where she (and many of us) began.
What strikes us here is not her decision so much as the why of it. In a nutshell, she missed writing, which is what she set out to do in the first place. In that, walking away from a coveted spot at a Condé title looks like the most natural thing she could have done.
In a world where aspiring twenty-somethings are always out for the career advice that will make their dream job a reality, Sherman emphasizes that a gig at a high-profile glossy isn't necessarily the key to career happiness (no matter how much New Yorkers tend to idolize that particular cafeteria or editrix). She shares several life lessons she's gleaned from her experience, and a self-affirming highlight reads, "I know a lot of you are looking for your first big break. Others are assistants trying to climb one more step up that infinite ladder. During this journey…work towards what you love. Try not to be tempted by jobs that won't get you there." In other words, remember what you are here for, which is advice that works across every profession, but is especially apt in hers. (Fashionista)

Best friend Gift Guide
11 Chic Pairs Of House Slippers You’ll Want To Cozy Up In
by Ray Lowe
Deals
This Weekend Got WAY Sexier With LELO’s Up-To-25%-Off Sale
You thought we were done with sex toy-centric sales? If you still haven’t taken advantage of all the deals that have come (wink wink) and gone, now&#
by Mercedes Viera
Most Wanted
24 Really Good Fashion Sales To Shop Right Now
by Chichi Offor
Advertisement
Deals
Get 20% Off Leeway Home With This R29-Exclusive Promo Code
Super Sale Alert: Get 20% off everything from Leeway Home with exclusive promo code REFINERY29 starting today through October 24. With Holiday dinners on t
by Mercedes Viera
Shopping
22 Just-Right Jackets To Layer Up With In Cooler Weather
by Alyssa Coscarelli
Most Wanted
The 5 Makeup Products You Need For A Quick Witch Costume This Hal...
Halloween is almost here, but don’t start panicking for last-second costumes now. You’ve still got time to put together one of our favorite spo
by Mercedes Viera
Shopping
A Clog-Shopping Guide: The Good, The Rad & The Fugly
by Emily Ruane
Deals
You’ve Got Until Tomorrow To Get 12 Bottles For $120 From Winc
Say happy birthday to our favorite online wine destination, Winc! The hub that brings wine straight to your home, curated to your exact tastes, is celebrat
by Mercedes Viera
Shopping
The Sustainable Jewelry Brand Fashion Insiders Are Obsessed With
For a long time, it seemed as though many folks busted out fine jewelry exclusively for fancy occasions or special nights out. But what’s the fun of
by Jinnie Lee
Shopping
We Spent Way Too Many Hours Digging Up These 60 Amazon Fashion Finds
by Eliza Huber
Most Wanted
Get The Perfect Holiday Gift From These Black-Owned Jewelry Brands
by Alexandra Polk
Most Wanted
25 Quilted Jackets To Cozy Up Your Closet
by Eliza Huber
Advertisement
Advertisement
Discover
R29 Stories & News
Watch
R29 Original Series & Films
Shop
R29's Most Wanted