Skip navigation!
Story from Entertainment News
Well, that was fast! Although, would we expect anything less from the ultimate serial dater herself? We've been hearing whispers of a Taylor Swift-Harry Styles coupledom for a few weeks now, but today we've got the ultimate proof (in Hollywood terms, at least): The two were spotted in public together. Lady T and the One Direction crooner (Tarry? Swyles? Haylor?) took their lovefest to Central Park over the weekend — strolling, laughing, and possibly even (gasp!) holding hands.
Of course, you're probably wondering what they're doing with that baby. Sources haven't confirmed, but we're going to go out on a limb and say they're watching a friend's offspring — unless our middle school teachers were right and you really can get pregnant just from holding hands. Knowing Taylor and her penchant for fast-tracking what should be casual relationships, she's probably testing out Harry's potential for fatherhood. We're thinking the title of Swift's next song should be "Slow Down." (Crushable) 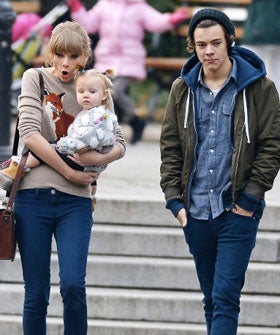