Skip navigation!
Story from Designers
THIRD UPDATE: Who does't love a little (more) designer, musical-chairs speculation? WWD reports today that French company Pinault Printemps Redoute, of Alexander McQueen and Stella McCartney fame, have set their sights on the U.K. (ditto!). Among PPR's list of British design houses that they may soon represent is Christopher Kane, a possible Nicolas Ghesquiere replacement for the coveted spot at Balenciaga. Some may see this news as just another business deal, however WWD points out that Balenciaga itself happens to be PPR-represented company. Kane, Balenciaga, PPR, new business...is this all a coincidence? Alas, while we try to piece together this puzzle, the recent replacement rumors remain just that: Rumors. Cue Adele. (WWD)
Advertisement
SECOND UPDATE: Okay, someone may need to draw us a diagram or a flowchart, because keeping track of sources, changes, and innuendo is getting quite tricky. First, news broke Christopher Kane was taking over Ghesquière's post at Balenciaga. Then Balenciaga and Kane's people denied he had been confirmed. (The exact quote his rep gave WWD: "Rumours surrounding Christopher Kane's appointment as creative director of Balenciaga are unfounded.") While this certainly doesn't mean he is in, it staunched the flow of rumors suggesting the appointment is finalized.
Then, this morning, to add to the whirlwind of speculation, Kane announced he was leaving his position at Versus, Donatella Versace's younger line, reportedly due to the fact that the label is ceasing production on seasonal collections and is shifting directions.
Does this mean Kane is getting ready to take over at Balenciaga, or is he really refocusing on his eponymous line? Things that make you go hmmm... (WWD)
UPDATE: Sorry folks, Christopher Kane has not been confirmed as the new creative director at Balenciaga. The brand has not made a selection yet but will announce their choice in the next two or three weeks, according to Elle.fr. That said, it will still probably be Kane, just no official word yet. (The Cut)
The fashion world was decently shocked when celebrated designer Nicolas Ghesquière seemed to suddenly just up and leave his post at Balenciaga, the Spanish label he helped revive. Rumors of hurt feelings and perceived offenses circulated — most prevalently, some suggested that Ghesquière was upset over the freedom Saint Laurent gave newly-minted Hedi Slimane, latitude which the more seasoned Ghesquière doesn't have.
Advertisement
Yet, it appears that — lo and behold — the search for a successor has ended, and The Cut is reporting that Christopher Kane will be joining the house. The Cut cites reputable French publication Nouvel Observateur for the news, even though there has been no official confirmation from Balenciaga either way.
Even more importantly, what will Donatella Versace think? Does this mean the end of her and Kane's younger, more punk venture, Versus? Kane cannot possibly helm Balenciaga and Versus and keep his own line afloat, à la Marc Jacobs and Vuitton... After the cough-syrup-and-candy-coated showing of Versus' most recent show, the closure of the line would indeed be a bummer. Kane and Versace have a weirdly amazing thing going — probably the reason why Balenciaga is poaching him. (The Cut/Fashionista) 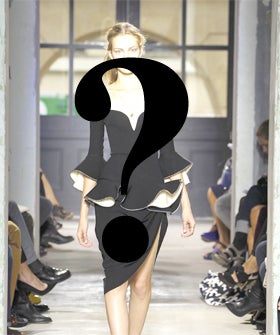 Style
Meet The 25-Year-Old Designer Turning Tablecloths & Tea Towels In...
No trend has stolen the sartorial spotlight in 2021 quite like corsets. It began with the wildly popular Regency-era series Bridgerton causing a 123% spike
by Eliza Huber
Designers
Valentino’s Couture Show Featured Statement Sleeves & Colorblocking
The return of in-person fashion shows these past few weeks, for Paris’ Haute Couture Week, has confirmed that, a year and a half after the pandemic f
by Frances Solá-Sant...
Style
Phoebe Philo Is Back In Fashion With Her Own Brand
Following a three-plus-year hiatus from fashion, Phoebe Philo is back. According to Business of Fashion, the former Céline (turned-Celine) creative direct
by Eliza Huber
Advertisement
Designers
To Make Couture History, Pyer Moss Celebrated The Past
The Pyer Moss Fall 2021 Couture show made headlines before it even began. On Thursday, members of the press, friends of the New York-based brand, and celeb
by Irina Grechko
converse
The Telfar x Converse Gym-Ready Collab Is Here
Update: The Telfar x Converse collaboration is now available to shop on telfar.net. This story was originally published on June 29, 2021. Telfar is steppin
by Frances Solá-Sant...
Style
Chanel’s Couture Show Featured Margaret Qualley In A Weddin...
On Tuesday, Once Upon A Time… In Hollywood star Margaret Qualley took a trip down the aisle for Chanel’s fall ‘21 Haute Couture show. For the show’
by Eliza Huber
Birkenstocks
Birkenstock’s New Collab Features A Ballet Flat Version Of Its “U...
Everyone’s favorite ugly sandal brand is getting the Jil Sander treatment. On Thursday, Birkenstock released a collaboration with the luxury fashion hous
by Frances Solá-Sant...
Style
Forget Jackets: According To Marc Jacobs, Puffer Hoods & Gowns Wi...
On Monday, both in the hallowed halls of the New York Public Library and projected on the exterior walls of Bergdorf Goodman, Marc Jacobs revealed his fall
by Eliza Huber
Designers
Prabal Gurung Responds To Accusations That The Brand Erased An AA...
Designer Prabal Gurung responded to accusations that his namesake brand photoshopped an Indigenous land recognition sign from two images in its Resort 2022
by Frances Solá-Sant...
Designer Collaborations
H&M x Brock Collection Is Here — Shop Every Look Now
by Frances Solá-Sant...
Designers
Prabal Gurung’s New Collection Is A Look Back At The Y2K Party Scene
Update: Following the publishing of this article, people on Twitter have pointed out that Prabal Gurung erased an Indigenous land recognition sign from two
by Frances Solá-Sant...
Style
Is This Little Black Box The New Little Black Dress?
QR codes found success during the pandemic when little else did. They replaced paper menus, credit and loyalty cards, and, in some cases, physical proof of
by Eliza Huber
Advertisement
Advertisement
Discover
R29 Stories & News
Watch
R29 Original Series & Films
Shop
R29's Most Wanted