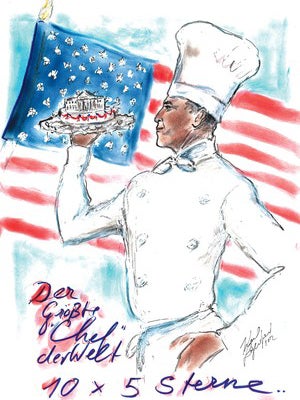 One of the most fascinating things about Karl Lagerfeld is that, despite often being fashion's most nefarious villain and cruel critic, he can turn around and do something downright heartwarming. First, he staunchly supported Nicolas Ghesquière after his suspicious Balenciaga fallout, and this morning, we find that The Kaiser was inspired by the re-election of President Obama and decided to express himself.
Lagerfeld has stated he is not a political person — and, in fact, when he has dabbled in politics, he has historically ended up looking like a bit of an "imbécile" — but his recent sketch isn't as much about the left/right divide as it is just a charming awareness of world affairs. Featured in the German newspaper Frankfurter Allgemeine Zeitung, Lagerfeld depicted President Obama in all chef's whites, proudly holding the White House like a garçon. Written in German, Karl scrawls, "The biggest chef in the world," and then does a little math by adding, "10x5 stars."
Advertisement
“The subject was inspiring,” he told the paper. The inspiration, it appears, was so strong that Karl turned to his newest cosmetic collaborator, Shu Uemura, for his materials, using the palettes as, well, his paint.
Brisk and somewhat off-putting demeanor aside, thinking of Karl Lagerfeld settling into his silver years as an eccentric who paints famous figures using only makeup might be one of the more pleasing thoughts we've ever had about The Kaiser, truly. (WWD)

Fashion
This Might Be Chromat’s Most Inclusive Swimwear Collection Yet
Becca McCharen-Tran is waiting for a call from DHL. The samples from Chromat’s Spring 2022 collection of inclusive swimsuits — for trans femmes, non-b
by Carli Whitwell
Style
Costume Institute’s New Exhibit Highlights American Fashion’s Ove...
What is American fashion? A little less than a year ago, the Metropolitan Museum of Art’s Costume Institute began to answer this question with the “In
by Irina Grechko
Best Wedding Dresses
Meet The Bridal Designers Behind Some Of Today’s Coolest We...
Welcome to Aisle Style, a week-long series that features the most untraditional wedding fashion trends, bridal designers behind the coolest wedding lo
by Fawnia Soo Hoo
Advertisement
Designer Collaborations
Iris Apfel x H&M Is Here — Here’s How The Style Icon Wants You To...
by Irina Grechko
Designers
Alexander McQueen Returned To NYC After 20 Years With A Nature-In...
There was a lot of talk about mushrooms ahead of the Alexander McQueen Fall 2022 fashion show. As soon as teasers began to quite literally sprout in the fo
by Irina Grechko
Black History Month 2022
Ruth E. Carter Is Black History, Present, And Future
R29Unbothered continues its look at Black culture’s tangled history of Black identity, style, and contributions to the culture with ROOTS, our annual Bla
by Venesa Coger
Adidas
Gucci’s Latest Collection Includes A Collab With Adidas
After months of rumors, Gucci confirmed that it’s partnering with Adidas with the release of the brand’s fall 2022 collection during Milan Fashion Week
by Frances Solá-Sant...
Designers
Y2K Fashion Defined 2021 — 10 Brands That Led The Charge
by Shelby Ying Hyde
Designers
Virgil Abloh Is A Reminder That Fashion’s Most Prolific Designers...
Barrier-breaking designer. Genre-bending artist. Visionary. These are some of the ways people have described Virgil Abloh after it was announced that the 4
by Irina Grechko
Unbothered
Anifa Mvuemba Took Over D.C. With Hanifa’s First Runway Show & Sh...
Designer Anifa Mvuemba is known for her beloved brand, Hanifa, which is full of vibrant and bold colored designs. On Tuesday (Nov 16), she debuted her firs
by Venesa Coger
Designers
Bottega Veneta Green Was Fashion’s Favorite Color. What Hap...
It was the color of the year — at least, it was for fashion types. Few cared about Pantone’s gray and yellow when there was “Bottega Veneta green”
by Katy Kelleher
Designers
Step Inside Susan Alexandra’s Store, A New York Fairytale Come To...
“We wanted it to look like a fairy godmother took her wand and enchanted everything,” says Susan Korn, the creative director and owner of Susan Alexand
by Irina Grechko
Advertisement
Advertisement
Discover
R29 Stories & News
Watch
R29 Original Series & Films
Shop
R29's Most Wanted