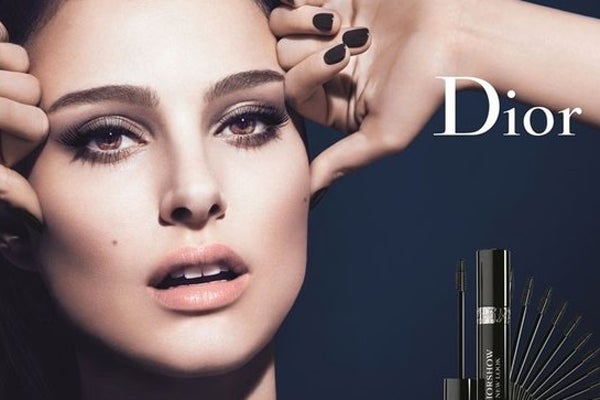 Natalie Portman is perfect and beautiful and has never done anything wrong or vulgar at all, right? So, why would one of her ads for Dior mascara be banned in the U.K.? Were the customers offended by her dewy visage? No. But, apparently, L'Oréal was deeply disturbed and reported the photo to the Advertising Standards Agency.
Of course, L'Oréal has your best interests at heart — and we have to agree that Nat's lashes, which we estimate are somewhere between 10 and 20 feet long in the ad, aren't exactly realistic. And, because of the government's rule that advertisements may in no way mislead customers about the actual effects of the product, L'Oréal made a perfectly legal move to push a competitor out of the market, at least, for now. The ads cannot be published pending further review.
Advertisement
Oddly enough, the photos were apparently originally shot for a Dior lipstick campaign — but her eyes looked so darn gorgeous that they decided to repurpose it for mascara. And by repurpose, of course, we mean Photoshop. Nothing more than the normal treatment any mascara ad would get, but the brand did "separate/increase the length and curve of a number of her lashes and to replace/fill a number of missing or damaged lashes, for a more stylised, uniform and tidy effect." It's not Maybelline; it's Dior, but either way, she's definitely not born with it.
No consumers actually reported the ads themselves, so either they don't agree with L'Oréal or they were so misled that they didn't even know it. Whatever the case, this is the kind of advertising turf war we normally expect to see on Mad Men, not in real life! (The Cut)

Beauty
We've Tried Every Beauty Product By Glossier — Here's What's Wort...
by Us
Makeup
All The New Drugstore Makeup To Add To Your Stash In 2021
by aimee simeon
Beauty
5 Incredible Makeup Looks To Rock To Your New Year’s Eve Zoom Party
From festivals to birthdays, the coronavirus pandemic has robbed us of many enjoyable moments in 2020 — and now that includes New Year’s Eve. While
by Jacqueline Kilikita
Makeup
It’s The Eyeliner For Me: 13 Anything-But-Boring Ways To We...
by Sydney Clarke
Beauty
For This Model-Turned-Makeup Entrepreneur, Prayer Is Her Power So...
After doing her own makeup backstage for years, fashion model Kim Baker decided to pursue her passion and become a full-time celebrity makeup artist. When
by R29 Editors
Makeup
Our Editors Reveal Their Favorite Liquid Foundations Of All Time
by Thatiana Diaz
Eye Makeup
6 White Eyeliners That Will Instantly Upgrade Your Classic Cat Eye
by Karina Hoshikawa
Celebrity Beauty
31 Makeup Looks To Liven Up Your Zoom Holiday Party
by aimee simeon
Makeup
The 13 Best Red Lipsticks You Can Find At The Drugstore
by Karina Hoshikawa
Beauty
The Best Mascaras Of 2020 — Including This $5 Winner
by Sydney Clarke
Beauty
11 Concealers Our Editors Swear By
by Us
Makeup
The Best Red Lipsticks Money Can Buy, According To The Pros
by aimee simeon
Discover
R29 Stories & News
Watch
R29 Original Series & Films
Shop
R29's Most Wanted