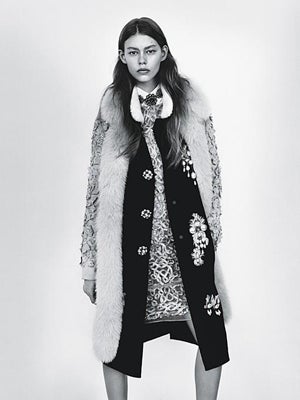 While flipping through magazines, you may have noticed most models look ageless — as in, you have no clue how old they are. A feature on the new power suit? She looks 20, but she's dressed like an awesome 45-year-old. A high-fashion spread in the pages of your favorite glossy? That model has the skin of a teenager and the body of a 20-something, but she's actually 45-year-old Kristen McMenamy. But, once you get behind the fabulous fashion scenes, the truth comes out: A surprisingly large portion of models working today are as young as 14, 15, and 16 years old.
Advertisement
It's a tricky issue that remains prevalent, despite the fact that many industry big names have come out against using underage models. To shed light on this unfortunate problem, College Fashion took an in-depth look into this all-too-typical industry standard, which anyone who cares about the future of fashion should absolutely check out.
First of all, child labor laws dictate that youths aged 14 and 15 may not work more than three hours on school days. We're guessing most after-school jobs break that rule anyway, but if any designer can produce a model schedule that begins and ends on time and in under three hours, we'll be very surprised. To be frank, child labor laws aren't terribly up to date anyway, and they don't really cater to the specificities of each industry (one stipulation reminds us that it is perfectly legal for youths to be employed to "gather evergreens and make evergreen wreaths"), but knowing how long it takes to photograph a lookbook or spread or prepare for a runway show — let alone hair and makeup time — it is evident that teenage models are being pushed beyond the legal (and, in many cases, mental and physical) limit.
For instance, five years ago, the CFDA's health initiative included an age guideline encouraging designers not to hire models under the age of 16. The saddest part about this issue is that despite having participated in the pledge, many CFDA leaders — people we look up to and respect — have been unable to maintain its simple standards. In fact, CFDA President Diane von Furstenberg and Marc Jacobs (who used then-underage Ondria Hardin, pictured, in a show) have since both hired under-16 models for their shows. As two of the most notable and recognizable designers working today, that's not setting a great example to young designers. Vogue, too, made that same pledge in print; however, the mag has had some trouble sticking to it. Broken promises do not help change the stereotypes about the vapidity and insincerity that lies behind the glossy facade of the fashion industry.
Being constantly judged on your physical appearance is hard at any age. At 14 and 15, it's enough to break your spirit forever. We would hope that anyone who went through high school would think twice before putting a young girl in front of the critical eyes of millions. If you feel the same way, definitely read the full article at College Fashion. It's enough to make even Karl Lagerfeld feel a little uncomfortable.

Advertisement
Designer Collaborations
A First Look At JW Anderson X Uniqlo’s Latest Collection
Designer Jonathan Anderson has got to be the busiest guy in the business. Just two weeks ago, the Northern-Irish designer was in London, presenting his “
by Eliza Huber
Fashion
Mango’s Spring ‘20 Campaign Collection Has The ‘70s Vests & Suits...
by Eliza Huber
Celebrity Style
These Are The Top Meghan Markle Looks To Try For Spring
by Amanda Randone
Fashion Week
Nothing Compares To Paris Fashion Week Street Style
by Eliza Huber
Fashion
These Swimsuit Trends Are About To Take Over Instagram
Hello, summer 20. We'll take all of these, please.
by Eliza Huber
Gucci
Original Gucci Jackie Bags Are Less Than $300 Right Now — But Not...
At its fall ‘20 runway show, Gucci reissued a version of its Jackie bag, the slouchy, hobo shoulder bag first introduced in the 1950s as the Constance, b
by Eliza Huber
Dedicated Feature
4 Denim Trends R29 Editors Are Wearing This Winter
by Kim Duong
Shopping
Drew Barrymore’s Latest Project Involves Protecting Your Eyes
There’s a reason Drew Barrymore has had not one, but two chart-topping songs dedicated to her in the past two years. It seems like there’s noth
by Amanda Randone
Fashion
19 Classic Black Bikinis To Kick-Start Your Swim Collection
by Eliza Huber
Fashion Week
Nobody Does Dystopian Chic Like Marine Serre
Is it tacky to care about fashion in the midst of a global health crisis? Maybe. But also, as my mom always says, life is for the living; and by quoting he
by Gabrielle Korn
Designers
Dior’s Latest Feminist Uniform Is Cool, But Who’s Buy...
Flashing in red, yellow, and green, three neon signs shouting CONSENT hung from the ceiling at the Bassin De L’Octogone in Paris’ Jardin des Tuiler
by Gabrielle Korn
Fashion Week
The Man Behind Your Favorite Fashion Shows Is Going Green
Rodarte’s acclaimed fall ‘20 collection was presented amidst a sea of flowers in St. Bartholomew’s Church, a Romanesque building on Park Avenue in Ma
by Eliza Huber
Discover
R29 Stories & News
Watch
R29 Original Series & Films
Shop
R29's Most Wanted