Story from Los Angeles
We hate nothing more than being stuck in traffic behind one of those stargazing bus tours as they creep along, pausing in front of A-list driveways. But, if yesterday's spotting proves to be a trend, we're totally tailgating each TMZ van that passes! While tourists were cruising around Beverly Hills yesterday, they happened upon a nearly naked David Beckham who was shooting his latest H&M underwear campaign. If they came to see the sights, these out-of-towners certainly got an eyeful!
Clad in khaki briefs, the heavily tattooed baller was seen in what Becks and his crew thought was a secluded spot. Lo and behold, a bus full of snap-happy tourists stumbled upon the set and caught a sneak peek of the upcoming collection. Although billboards and statues of the 37-year-old litter our city streets, Becks was super shy and ran off to his car in hopes of avoiding a photog's lens. Luckily for us, he didn't run fast enough! (The Telegraph) 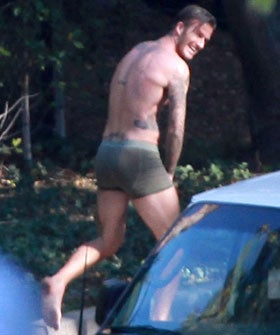 Photo: Via The Telegraph