Skip navigation!
Story from Fashion
Designed by Meg O'Donnell
For years we've been told that yellow isn't a flattering colour to wear but I beg to differ. Last summer, when I wore a bright yellow dress on one of the hottest days of the year, I received countless compliments from other melanin queens who said my skin was "popping". You see, while Black women look good in everything, something about yellow is perfectly made for the melanin goddess in us all. It's playful as well as regal – we associate yellow with springtime frolics and royalty alike. When Beyoncé Knowles-Carter stepped out in a bold yellow gown by Vietnamese designer Nguyen Cong Tri at the 2019 European premiere of The Lion King, it practically broke the internet. Ditto when Rihanna attended the 2015 Met Gala in an imperial yellow, fur-trimmed cape by Chinese couturier Guo Pei. Same again when Viola Davis stunned us all in a canary yellow custom Michael Kors gown at the 2017 Golden Globes. There's no denying that there's something very magnetic about a Black woman dressed in yellow.
Advertisement
This isn't a new observation. Back in 2018, the hashtag #BlackWomenInYellow made the rounds on social media after Twitter user @rarebre3d tweeted: "Can we make #blackwomenwearingyellow a thing tho." She later shortened it to #BlackWomenInYellow and, within minutes, Black women around the world were sharing their yellow ensembles, gushing about their love for the colour. At the time of writing, the hashtag has amassed 3,265 posts on Instagram and thousands more on Twitter, showing Black women adorned in yellow dresses, co-ords, suits, athleisure, swimsuits – you name it.

Besides looking great on our skin tone, the colour yellow can make us feel happier. Colour psychology suggests that yellow contains a multitude of emotions, everything from attention-grabbing and energetic to difficult to read, frustration and warmth. In many cultures, the cheerful hue symbolises happiness, joy and hope. During China's Qing dynasty (from the mid 1600s), yellow became the colour of emperors and was reserved for the royal family yet in modern times, the colour is also associated with cowardice, caution and crime scene tape. It's the shade of hazmat suits and the skull-and-crossbones warning label on toxic products. While it has been widely recognised as a distress signal, it's a colour that doesn't sit on the sidelines to be ignored.

In her book Dress Your Best Life, New York-based fashion psychologist Dr Dawnn Karen writes that yellow can "imbue its wearer with an aura of cheerfulness and approachability". If you're facing a stressful social situation, such as moving to a new city, meeting the in-laws for the first time or looking to make new friends, a yellow outfit can project an air of likeability. Whether you wear a head-to-toe ensemble in the hue, add a pair of neon yellow trainers to a '90s slip dress or team a mustard cocktail frock with glinting golden sandals, your outfit is sure to be a conversation-starter. Dr Karen says that yellow is her go-to for "mood enhancement".
Advertisement
"The colour yellow is an illumination on Black skin," Dr Karen tells me over Zoom. "Black women in yellow is boldness, the context of the colour changes completely. Black women looking good in yellow is essentially a culture thing, the washed out narrative is no more."
She continues: "#BlackWomenInYellow created a cultural moment, it allows us to praise each other, it gives us the attention we rightly deserve. It's beautiful — and as we're in the middle of a revolution, it's even more powerful and relevant to come together this way."
In her 69 costume changes in the visual album Black Is King, released in July, Beyoncé once again returned to the bright shade. Senegal-based sustainable fashion label Adama Paris custom-made her sensational off-the-shoulder marigold number with matching headpiece; she looked, as she is affectionately known, like a Queen. Powerful. Regal. A Boss Bitch. Later, Beyoncé added Olivier Rousteing's colourful SS20 collection to her rail, in another off-the-shoulder draped top and matching yellow slit skirt, and more recently, she stunned in a bright yellow Valentino gown at the 2022 Oscars.
We all know Beyoncé is no stranger to the shade. After all, she was the one who put yellow on the map. When she dropped her 2016 album Lemonade, we watched in awe as she tore down a sidewalk in the video for Hold Up in a swarm of yellow ruffles, letting us all know that she's not one to be trifled with. And that's the vibe we get with yellow. We look phenomenal, approachable and joyful – but don't you dare cross us.
Advertisement
shop 6 products 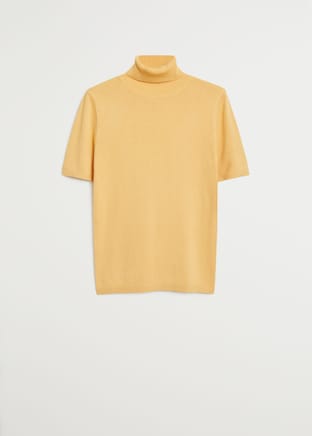 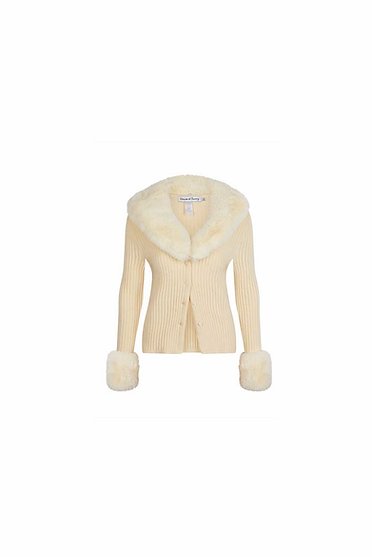 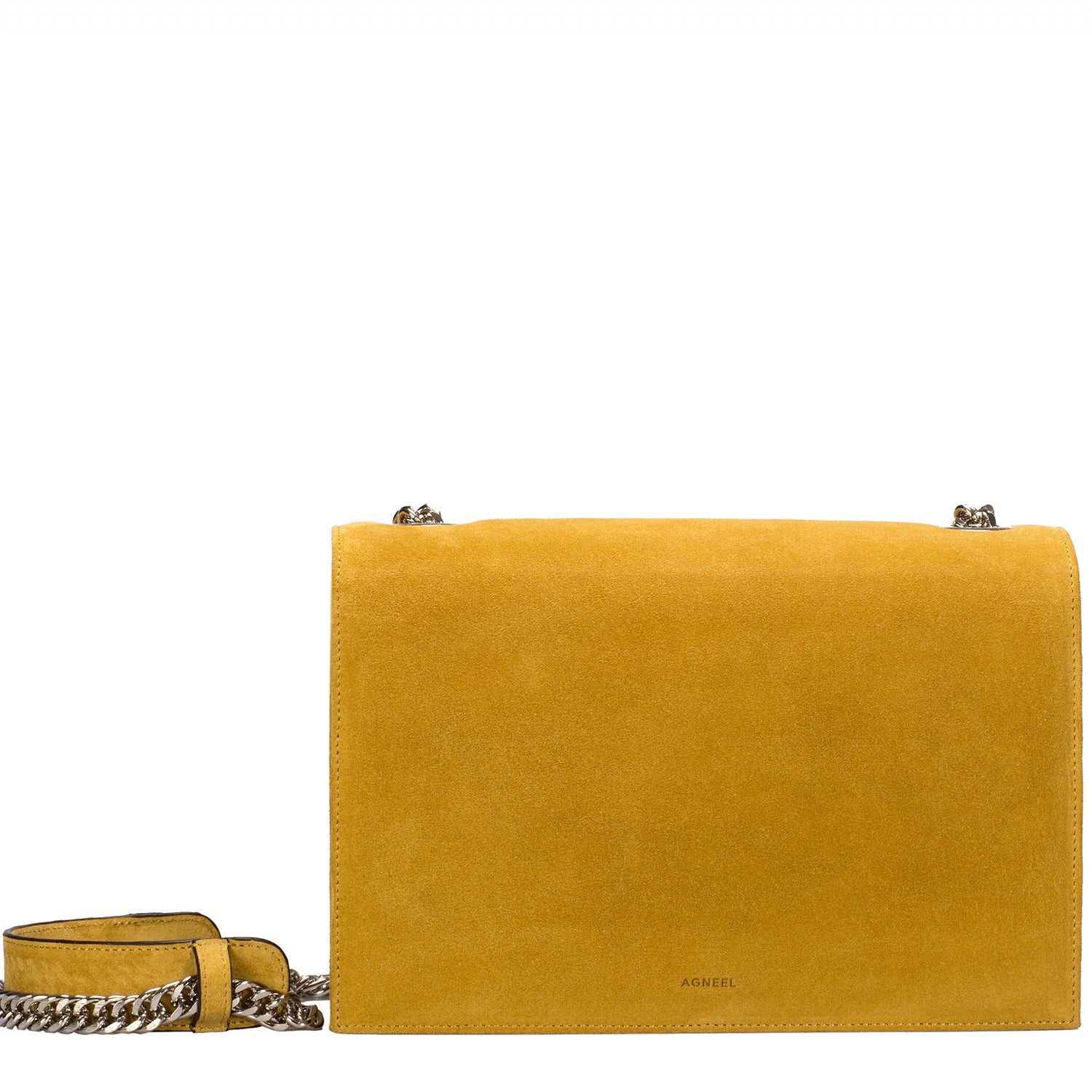 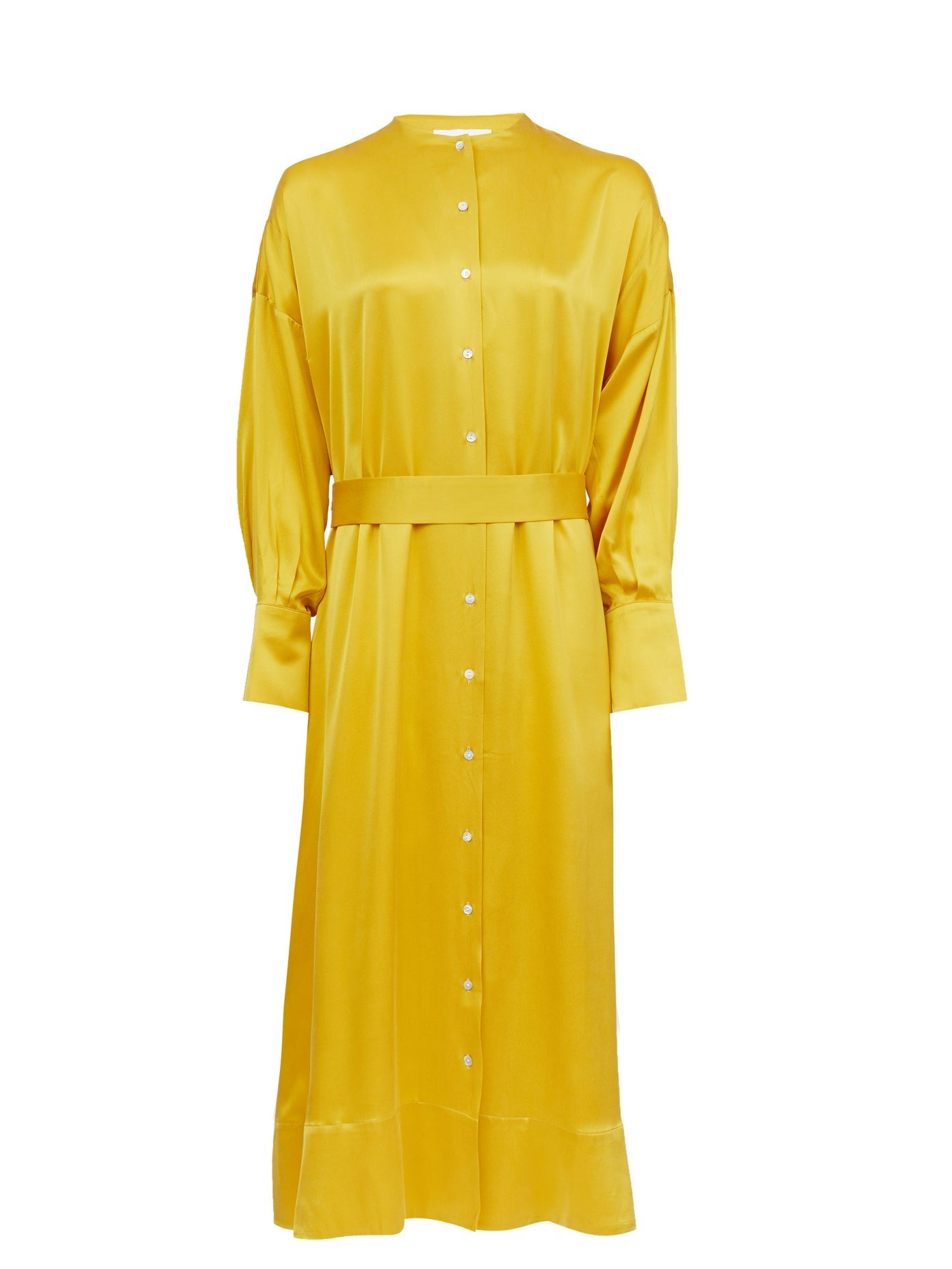 Asceno
Rome Belted Silk-satin Shirt Dress
£485.00
MatchesFashion.com
"Yellow allows us to shine on every level," adds Dr Karen. "The colour yellow — while it looks great on lighter skin tones — increases the intensity on Black skin." Dr Karen says she often prescribes yellow to those wanting to feel better. "While it attracts a lot of attention, [yellow] activates boldness and evokes feelings of dominance and that's all without having to speak."
Fashion and celebrity stylist Nana Acheampong, who has dressed the likes of Ella Eyre, Alesha Dixon and Mel B, agrees that the colour is flattering for Black women. "Black women can pretty much wear any colour but yellow is one of those colours that really pops. It glows brightly against melanin skin and will make sure you stand out from any crowd, although negatively it can be seen as an egotistical colour to wear."

She adds: "Yellow represents gold and the richness of land (Africa) to Black people. It can also be found in many African and Caribbean flags, therefore people can also feel quite patriotic while wearing it. It's also an obvious reminder of the sun – it's a feelgood colour and an instant mood-lifter."
Dr Karen says you can mix and match colours to decrease the intensity if you're an introvert: she advises against head-to-toe yellow ensembles and instead suggests mixing it up with variations. "Wear a yellow top with a different coloured bottom" or, as she writes in her book, "try a chunky yellow turtleneck with white skinny jeans."
"Team yellow with denim all year round for a classic look or if you're feeling bold, wear as a block colour on its own," Acheampong concludes.
Even in 2022, everywhere you look — Twitter, Instagram and beyond — Black women are dominating the colour yellow. Following the difficult years of the pandemic, wearing yellow shines a light in the darkness when we need it the most. While summer seems to end as soon as it starts and some colours may go out of style as the winds of fashion blow them away but yellow, my dear friends, is here to stay.
Fashion
For The Plus Community, Size-Inclusive Intimates Can Change Every...
Fashion is how we choose to present ourselves to the world. As such, few decisions are as intimate as what we put on our bodies. That’s especially true w
by Gianluca Russo
Shopping
How To Style Your Cowboy Boots, The Hottest Footwear Of The Summer
by Alicia Lansom
Shopping
From Net-A-Porter To Made.com: These Are The Summer Sales To Get ...
Rooftop bar drinks, festival season, staycations by the sea and that big girls’ trip that’s finally left the group chat… Summer is here a
by Esther Newman
Advertisement
Fashion
This Viral Pleated Skirt Is A Fashion Must-Have
Since 2019, fashion forecaster Mandy Lee has been on a hunt for a pleated skirt from o, the London-based brand founded by Emma Chopova and Laura Lowena in
by Frances Solá-Sant...
Shopping
17 Summer Holiday Essentials You’ll Actually Wear
by R29
Fashion
Denim Leg Warmers Are The TikTok-Approved Way To Upcycle Your Jeans
Fashion has had a string of odd trends this year, from unnecessary belts to glass handbags and cargo jeans. But if there’s a trend that takes the “Most
by Frances Solá-Sant...
Style
Crop Tops & Biker Chic: The Best Street Style At Copenhagen Fashi...
by Pema Bakshi
Style
Horse Girl Has Grown Up & Entered A New Era
I’m sure I’m not alone in admitting that for my preteen self, horses were a big part of my life. Looking back, it was a surprising obsession fo
by Maggie Zhou
Fashion
A Basket Bag Is The Only Accessory You Need This Summer – Here Ar...
by Esther Newman
Shopping
14 Of The Best Brands Bringing Back Silver Jewellery
by Esther Newman
Fashion
The Best Denim Shorts For Every Summer Style
by Alicia Lansom
Fashion
We’re All Barbie Girls In A Barbiecore World
One month ago, the internet was momentarily silenced when the first photos emerged from the set of Greta Gerwig’s highly anticipated Barbie film. The glo
by Alicia Lansom
Advertisement
Advertisement