Skip navigation!
Story from Los Angeles
Every time Taylor Swift shows up in our news feeds it's for one of two reasons: either she's wearing yet another flirty frock (she's a loyal fan of the style) or she's been spotted with a new beau. Well, wouldn't you know, it's been reported that the blonde starlet not only sported one of her go-to dresses, but she's also the subject of another rumored romance. A TayTay double whammy for your Wednesday morn!
As we all know, when Swift settles down, it's not with any fella — she only dates top-tier dudes (Jake Gyllenhaal, John Mayer, Taylor Lautner, etc.). Earlier this summer she was allegedly dating Patrick Schwarzenegger (you know, the son of Cali's former governor) but quickly denied the reports. Now, she's climbed a little bit higher on the political ladder to Conor Kennedy, son of Robert Kennedy Jr. And while Pat had that Camelot connection (mom is Maria Shriver), it seems like Swift wanted to solidify her title as America's sweetheart with direct lineage (and a very well-known last name). She even gushed to Vogue back in January that she was "starstruck" upon meeting Caroline and Ethel Kennedy.
Advertisement
By now, you may be asking yourself, "is this the real deal?" Well, let's just say the two were very hands-on this past weekend at the Kennedy compound in Hyannisport, Massachusetts, and were seen grabbing pizza and leaving church together. The true signs of young love, don't you think? (Daily Mail) 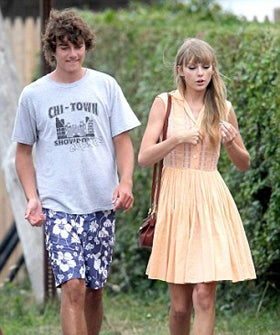