Skip navigation!
Story from New York
When you’re a New Yorker, "signal problems" is just another phrase in your day-to-day vocab. We are the city that loves to complain about the subway system, but maybe we have the right to, given this latest report? Comparing each line against each other, the Straphangers Campaign has spent 15 years perfecting the ultimate subway line showdown. Sure, the G might not be able to make it between Greenpoint and Lorimer without breaking down, but surprisingly, it’s not at the bottom of the list. Which is? Well, we feel for you guys on the west side, as the C line is the sorry loser valued at a pauper’s 85 cents. (It breaks down every 64,324 miles.)
The State of Subways report ranks each of the lines after assessing them against six different categories, and values them out of a total $2.25 (that's now the price of a single ride for all of you living the unlimited-ride high life). It’s a disappointing story for the D line, and a fail for the 4 and the 5 — we guess shiny new trains aren’t everything. So, which takes the biscuit? It’s Queens that wins with a capital Q! Valued at a top-notch $1.60, the steamlined beauty rarely breaks down, she has plenty of seats, and she even runs express through the borough. Oh, those lucky Astorians. Give us a Q, give us a U ... give us a break, or at least, some maintenance. (New York Observer) 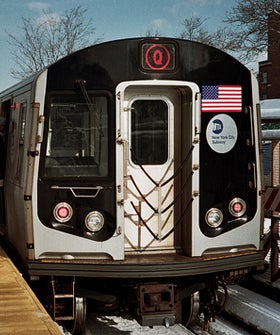