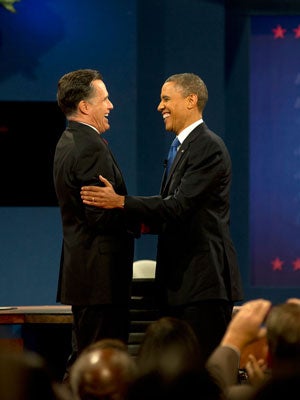 While a full assessment of Hurricane Sandy's impact won't be completed for days, or more likely, months, it's not all quiet in the wake of the storm — news sites, pundits, and political figures are already debating whether Sandy will be a liability or a boon to the Obama and Romney campaigns.
Real talk: Does it seem somewhat insensitive to position widespread devastation in the light of political gain or loss? We think yes, and at least right now — but then again, keep in mind that the battleground states the candidates are fighting so hard to lock down are primarily not on the Eastern seaboard, and therefore not preoccupied with flooded basements and downed power lines.
Advertisement
Here's just a taste of the crazy chatter happening today: New Jersey Governor Chris Christie, one of President Obama's most outspoken critics and a #1 fan of Mitt Romney, has been shockingly vocal in commending the prez for acting swiftly and decisively in support of affected states. Romney hasn't voiced criticism yet, but Slate reports that he's quietly campaigning during his relief events in Ohio. And, after a capable and effective response to Sandy, Obama's detractors now criticize him as "playing president" — you know, acting like a president now that the pressure is on. But, there's also this tricky little issue of the fact that he actually is president, and so, you know, one could say he's just doing his job.
Our question to you: Will the political reaction to Sandy influence the way you vote in any way (barring the polls actually being closed next Tuesday, due to power loss and damage)?