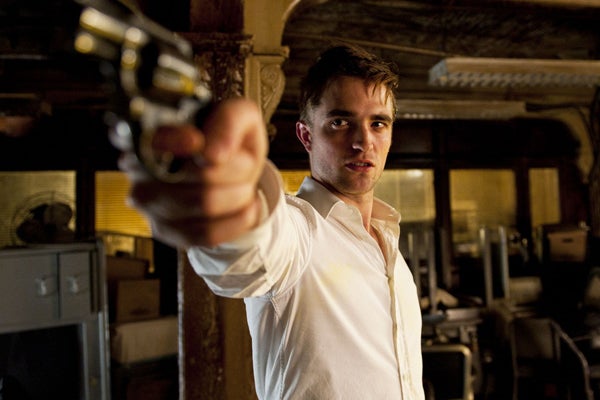 For those Twi-hards who would never dream of seeing their Edward Cullen sullied, look away. In a major shift from his past romantic roles (did anyone even see Water For Elephants?), Robert Pattinson gets racy in this just-released, super-spicy, sex-and-violence trailer for David Cronenberg's Cosmopolis. Here are the deets: Based on the cult book by Don DeLillo, Cosmopolis traces the path of multi-billionaire Eric Packer as he treks across Manhattan in a stretch limo hoping to get a haircut. Except on his way, he loses billions of dollars, has plenty of sexy encounters (including a few with his wife), and total, complete nihilism. And no one could better helm this project than David Cronenberg, whose sex-equals-violence-equals-sex filmography includes A History of Violence, Crash (the one about people having sex to car crashes, not the Sandra Bullock one), and Videodrome.
Advertisement
In the trailer, Pattinson seems to embrace his dangerous side, even shooting through his hand in one scene. But the best part is seeing Pattinson's exposed abs, which seem to have traded in vampire glitter for some sparse chest hair and the red dot of a gun's laser sight. We like Robert's approach: Don't just gently move away from your teen heartthrob image...destroy it completely.

Photo: Courtesy of Cosmopolis, The Movie