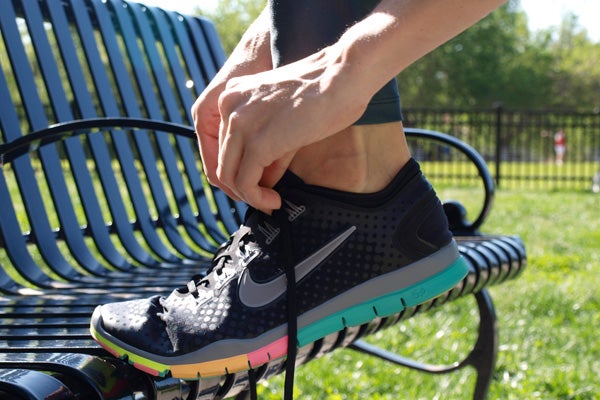 There are dozens of signs that herald the arrival of spring — floral prints, cute flats, breezy dresses — but none so omnipresent as the thousands of runners, from novices to lifers, who take to the streets once the weather warms up. Coupled with the dozens of 5Ks, 10-milers, and half- and full marathons that happen this time of year, the allure of challenging yourself to complete a race is hard to resist.
But, before you lace up your sneakers and hit the road, there are some things the novice runner should know — and there's no better way to teach than by example, right? In that spirit, I — your humble D.C. editor and basically the least athletic person around — signed on three months ago to run the Nike Women Half Marathon. Along the way, I've gotten some expert advice from local and national running professionals, struggled through an injury, and logged more than 100 miles, in the hopes of completing my first-ever race on Sunday, April 28, alongside 15,000 other runners. Read on for the ultimate real-girl crash course for finishing your first race.
Advertisement 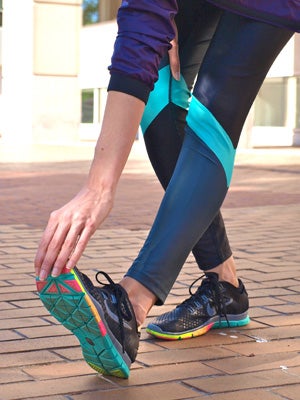 First things first: If you're serious about running, there are some basic mechanics you'll need to master, and the best way to do that is to enlist a running coach. Mike Hamberger, a professional coach and a 10-year competitive runner, notes that as a beginner, it's crucial to determine your foot strike before you start training. While it seems like everything is up for debate in the running world, a mid-foot strike is considered ideal — this means that when your foot touches the ground, the point of impact is somewhere between the ball of your foot and your heel. Heel-striking, or landing directly on your heel as your foot comes down, can lead to injury (hello, epic knee pain!) and a slower pace.
Utilizing a running coach is the most effective way to determine where you're striking. "Normally, we have better foot strike when we run at faster speeds, because there is such a thing as running too slowly," Hamberger says. "A lot of magazines tell runners that they should run slower, pace themselves, and so on. But, if you watch someone run at a very slow pace, you see that it's like a fast walk — and walking is heel-striking." The takeaway? Figure out your "first gear" — i.e., a fast walk/jog — then your second and third gears, and try to do most of your running in second-gear pace. "This prevents you from running too slowly, and gets your foot higher off the ground," Hamberger says, "which gives it more time to come down and hit the ground on the mid-foot instead of the heel." And, lest you think a running coach is an expensive luxury, you can snag a Running 101 session with Hamberger for just $35.
Advertisement
Once you've mastered a proper foot strike, you can focus on your form. Hamberger recommends a tall posture ("not 'computer posture'"), with shoulders down and relaxed, chin down, arms softly bent at 90 degrees, and hips perpendicular to the ground, not angled forward or arched back. Now that you've got the basics down, it's time to hit the road and start logging some miles. 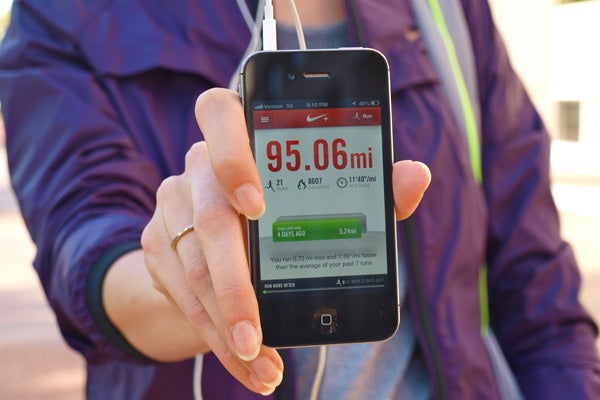 As you train for a race, it's important to remember that you're not just getting in shape for a run, but also developing a routine for race day. "The first (and most important) rule of endurance medicine is 'don’t do anything new on race day,'" says Dr. Lewis Maharam, medical director of the Leukemia & Lymphoma Society's Team in Training program and author of Running Doc's Guide to Healthy Running. This means that, while you're training, you should test sports drinks (especially the drink that will be provided on the course); determine how long you can run before you need to hydrate; and figure out the best pre-race breakfast or snack that keeps you fueled.

Maharam's book is chock-full of helpful info for runners — here are the Cliff's Notes for newbies:
1. Stick with water for shorter runs and exercise sessions under 30 minutes. Switch to using sports drinks exclusively for longer endurance training. Mixing the two can decrease your body's ability to handle physical stress.

2. Don't carbo-load. Sure, it's pretty awesome to eat a pile of fettucine alfredo and not feel guilty, but once again, you don't want to do anything before the race that you haven't been doing all along. Stick to normal amounts of healthy foods. "This is not your last meal," Maharam notes, "and if you eat differently than usual, you may feel sick on race day."
Advertisement
3. If you've been training hard, you've likely been on a regimen of pain medication to deal with sore muscles. Twenty-four hours before a race, you should stop taking Advil, Motrin, Aleve, and other non-steroidal anti-inflammatory meds, as they can put you at risk for hyponatremia, a serious kidney issue. You can continue to use acetaminophen (Tylenol) as needed.
4. After finishing your race, you might feel like a bowl of Jell-O, but it's important to keep walking for 10 to 15 minutes, to allow time for blood flow to go from your legs back to the rest of your body (i.e., keep yourself from passing out). Start with a sports drink to restore electrolytes and sugar, then have a meal with plenty of carbohydrates.
5. Try to maintain or slow your pace as you enter the final mile. It may seem the like appropriate moment to channel Chariots of Fire and push yourself hard, but you'll be less likely to injure yourself if you stick with the pace you established during those weeks of training. 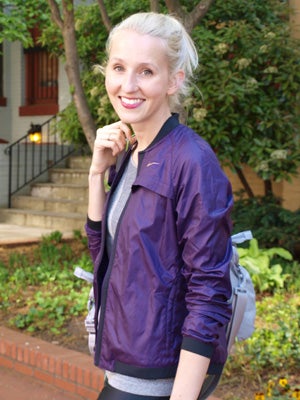 And now, here's my story.
I've never been athletic — far from it — but I've always fantasized about crossing a finish line in a blaze of glory. (Blame it on years of watching Ironman races on TV.) I ran in my 20s only when I felt frustrated or upset; running was a way of "getting my demons out," more punishment than pleasure. There was no conditioning, no training, no attention to my nutritional needs — just 30 minutes of unbridled adrenaline, emotion, and ultimately, pain. Turns out, I was going about it completely wrong. Here, seven crucial steps to finally learn how to love running, from a born-again road warrior:
Advertisement
1. In order to become a runner, you have to want to be a runner. That may seem obvious, but running — especially for a beginner — has its own particular set of hardships, and knowing deep down that this is something you truly want to succeed at will keep you motivated.
2. Get the right shoes — not the most expensive or trendy. Contact your local run clubs and find out which stores they recommend; choose a store where you can have a gait analysis done and get personalized attention to find the right fit. Keep in mind that your running shoes should be at least a size bigger than your normal shoes (for example, I wear a size 9, but run in a size 10 or 10.5). A properly fitted shoe can cut down or even totally eliminate shin splints and blisters.
3. There's nothing worse than feeling dehydrated during a run — pretty soon, all you're thinking about is how excruciatingly thirsty you are. I gave up coffee and alcohol for the 12 weeks of training and devoted myself to water and Gatorade. The result? Better endurance, faster recovery, and the best skin of my life.
4. Give yourself a deadline. Follow a "couch to 5K" program, or check out Nike's phenomenal training program for a variety of race lengths. For a deadline-oriented person like myself, having a structured plan where I could track my progress week by week made a once-crazy goal feel attainable.
Advertisement
5. Repeat this mantra: "It takes three weeks to teach your body something new." Don't be too hard on yourself during the first month of your training. After all, you're asking your body to do something new and difficult, so give yourself a three-week grace period to get conditioned. I swore my heart would explode after one lap around a football field, but after three weeks, the conditioning kicked in.
6. Buy a foam roller. I struggle with ITBS (a common injury associated with the muscle that connects your hip and knee), and while the foam roller routine can be painful, it's essential for working out the kinks and staying loose. Also, reward yourself every six to eight weeks with a professional massage — either the cheap mall-kiosk variety or a real-deal spa treatment. Your next run will feel much easier.
7. Get the gear. (Seriously, don't overlook this step, because it's the most fun.) It may sound superficial, but having workout clothes that are designed for your activity and make you feel like a proper athlete can be really motivating. I'm a huge fan of these Nike tights and these C9 by Champion t-shirts.
Fitness
These Vibrating Massage Tools Feel Just As Good As A Massage
by Cory Stieg
Most Wanted
Runners: Outdoor Voices Launched A Collection For YOU
by Karina Hoshikawa
Most Wanted
The Perfect Lululemon Matching Sets For Every Occasion
by Karina Hoshikawa
Advertisement
Fitness
8 Sustainable Running Shoes For Some Eco-Friendly Exercise
by Karina Hoshikawa
Sustainability
Real People Share Their Favorite Reusable Water Bottle Brands
by Angela Tafoya
The Environment
Eco-Conscious Workout Gear That Actually Performs
by Emily Ruane
Workout Clothes
Outdoor Voices’ New Athena Dress Is Cool, Layerable, And Ready Fo...
If there’s one item in my closet that got a lot of use last summer, it’s the Outdoor Voices Exercise Dress. The breezy, lightweight garment is as comfy
by Karina Hoshikawa
Fitness
9 Female-Founded Fitness Brands Treating Every Day Like Internati...
by Alexandra Polk
Workout Clothes
The Best Workout Clothes & Sneakers Flexing On Amazon
by Kate Spencer
Dedicated Feature
The Founders Of LatinxHikers Want To Change Your Definition of “O...
For months now, Adriana Garcia and Luz Lituma have been collaborating across time zones, state lines, and hundreds of miles to maintain LatinxHikers — th
by Roxanne Fequiere
Dedicated Feature
Outdoor Adventure Sports Aren’t Inclusive Enough — Here’s How One...
As an acclaimed skydiver, an active hiker, and a military veteran, Danielle Williams is nothing short of fearless when it comes to facing the great outdoor
by Roxanne Fequiere
Fitness
Lululemon’s Sizing Is More Inclusive Than Ever Before
by Karina Hoshikawa
Advertisement
Advertisement
Discover
R29 Stories & News
Watch
R29 Original Series & Films
Shop
R29's Most Wanted