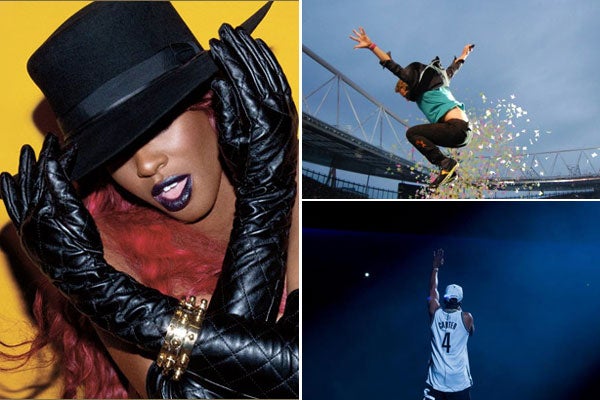 Jay-Z and Coldplay: Barclays Center, December 31, $45
Shawn Corey Carter may not have released an album this year, but with a new stadium, Blue Ivy, and an epic tour, 2012 sure seemed like his year. With Coldplay supporting (how many people can say that?), Hova returns to the Barclays Center for one more round to bring in the new year. Won't you join him?

Titus Andronicus: Glasslands Gallery, December 31, $30
Anthemic New Jersey punks Titus Andronicus are headlining Glasslands' New Year's Eve party, guaranteeing lots of fist-pumping and sing-along antics. Need a break from the bass drum? You can always head next door to 285 Kent for their NYE festivities, too. If DIY is your MO, Kent Ave is the place to be on Monday night.

Matthew Dear and Superpitcher: Le Bain, Azealia Banks: Top Of The Standard, December 31, $50+
Want to stick to Manhattan to say hello to 2013? There's no better place to be than The Standard Hotel. At Le Bain, your evening will be sound-tracked by minimal-techno legend Superpitcher and dark-pop mastermind Matthew Dear, or head to the Top of the Standard to hear hip-hop firecracker Azealia Banks where she is playing a snazzy black-tie event. You can't go wrong with either, so start making friends with the doormen now.

Movies
Here’s How That Palm Springs Time Loop Works
Warning: Major Palm Springs spoilers ahead. It’s a trope as old as time: Two lonely wedding guests get drunk, then get together. In Palm Springs, though,
by Lydia Wang
Pop Culture
Jada Pinkett & Will Smith Spent Their Highly Anticipated Red T...
After a shocking reveal from August Alsina put her business on front street, Jada Pinkett Smith has pulled up a chair to the red table to share her side of
by Ineye Komonibo
Music
New Music To Know: Sad Girl Season Makes A Comeback, & 2020 Still...
As if Fridays weren’t your favorite day already, Refinery29 will also be gathering the best new music out each week, and breaking down why each track des
by Ineye Komonibo
Pop Culture
Armie Hammer & Elizabeth Chambers Split After 13 Years Together
After over a decade of marriage, Armie Hammer and Elizabeth Chambers have filed for divorce. All together, the former couple had been together for 13 years
by Natalie Morin
TV & Netflix
Zac Efron’s New Netflix Travel Show Isn’t Really Abou...
In a turn of events no one could have seen coming back when Troy Bolton was singing cathartically on that golf course, Zac Efron is now a travel show host.
by Lia Beck
TV & Netflix
The End Of The Old Guard Practically Promises A Sequel — W...
Warning: Spoilers for The Old Guard ahead.  Netflix’s The Old Guard may not be the typical comic book movie, but its ending still sets up an all-but
by Ashley Chervinski
Pop Culture
Lea Michele’s On-Set Behavior? Sarah Paulson Would Rather N...
Some people jump at the chance to weigh in on the latest scandal. Sarah Paulson, however, is pleading the fifth. The American Horror Story actress was rece
by Natalie Morin
Best of Netflix
Glam, Astrology, & Love: Inside Netflix’s Latinx Love Letter M...
“It’s just so cute to me that in Walter’s world, there is somebody who is a beast in perfume,” Mucho Mucho Amor: The Legend of Walter Mercado docum
by Ariana Romero
Celebrity Couples
Cassie Randolph Just Called Colton Underwood Out For Trying To “M...
True love isn’t exactly easy to find in Bachelor Nation, but it’s even harder to keep, especially when you’re in the limelight. Just ask
by Ineye Komonibo
Movies
The Ending Of Relic Reveals A Monster We’d Rather Not Th...
This article contains spoilers for Relic, out on VOD July 10.  The great power of Relic, Natalie Erika James’ terrifying directorial debut, is how d
by Anne Cohen
Movies
Every Song In Palm Springs Will Leave You California Dreaming
by Shannon Carlin
TV Shows
This I’ll Be Gone In The Dark Exclusive Clip Is Some...
We may only be two episodes in to HBO’s newest true crime documentary, I’ll Be Gone In The Dark, but already the series has proved to be just as captiv
by Natalie Morin
Discover
R29 Stories & News
Watch
R29 Original Series & Films
Shop
R29's Most Wanted