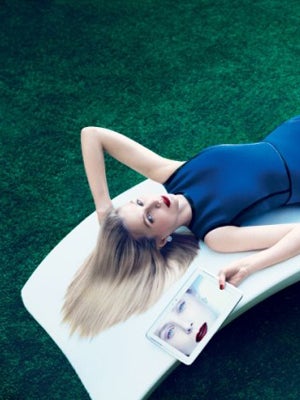 Photo: Via Vogue.
Search the words "Marissa Mayer" and "Vogue" and you'll see that a lot of people have got pretty upset by the Yahoo CEO appearing in the magazine's September issue. A lot of this discussion centers on photographer Mikael Jansson's "infamous" and "controversial" image of the tech businesswoman reclining on a sun lounger. Speaking at the IAB's Advertising Week conference this week, Mayer spoke out for the first time about her decision to be featured in the magazine. She claimed that the photo—deemed by many as unsuitable for a high powered businesswoman—was unplanned and "out of necessity", Mashable reports. Mayer was visibly embarrassed when asked about the feature, and claimed that she hadn't even read the interview.
Advertisement
The offending photo features Mayer reclining in pretty conservative shift dress and shot from above. It doesn't exactly break down boundaries in fashion photography, but it makes a change from the standard powerful-person-looking-pensive-behind-their-desk composition. And after all, this is a shoot for Vogue not Time. The interview itself, which goes under the heading "Hail To The Chief" is about Mayer the businesswoman, not Mayer the fashion plate.
Mayer's apparent need to explain herself has disappointed us on two counts: the first is the assumption that a woman profiled in a fashion magazine is somehow betraying the sisterhood, and—perhaps more frustratingly—the fact that Mayer tried to shrug off her decision to appear in Vogue instead of owning it.
Mayer's approach in business has caused its fair share of controversy, but then is there a CEO whose approach hasn't upset people along the way? While a recent business feature accused her of having an "absurd in her attention to detail", Steve Jobs was widely praised for possessing precisely the same quality. And surely an article that brings Mayer's achievements to a wider (and predominantly female) audience has got to be a good thing, right?
What do you think? Is it OK for a woman with a high profile business career to be portrayed in this way? Or does Mayer have good reason to be embarrassed?
Unbothered
If Your Feelings About The Queen’s Death Are Complicated, That...
On September 8, Her Majesty Queen Elizabeth II passed away at the age of 96, after 70 years as the nation and commonwealth’s monarch. In the days sin
by L'Oréal Blackett
Unbothered
The Most Disrespected Group Online Are Black Women — This CEO Is ...
“The most disrespected person in America is the Black woman…” said civil rights leader Malcolm X, more than 50 years ago. Speaking directly to Black
by L'Oréal Blackett
Abortion
Why Kamala Harris Feels ‘Optimistic’ About The Future...
It wasn’t hard to see the symbolism in the torrential rains that preceded Vice President Kamala Harris’s visit to Indianapolis, IN, on July 25. One mon
by Molly Longman
Advertisement
Unbothered
Why I’m Only A Black Woman On Sundays
I am only a Black woman on Sundays.  Let me clarify.  I am a 21-year-old Black nonbinary person. I was assigned female at birth. My pronouns are
by Reegan Saunders
Unbothered
Mo Farah Bravely Told Us Who He Really Is — Now All Trafficking V...
How do you tell people that you are not actually who they think you are? This week, world-famous British sportsman Mo Farah did so, taking the brave step o
by Banseka Kayembe
Abortion Access For All
“A Minor Victory.” Abortion Care Resumes In Three Trigger States ...
The article is being updated as more news about temporary injunctions and restraining orders impacting abortion access comes out. It was originally publish
by Molly Longman
Unbothered
On Ketanji Brown Jackson, ‘Making History,’ And The Expense Of Bl...
Update: Justice Ketanji Brown Jackson has been sworn in to the Supreme Court as the first Black woman sitting on the nation’s highest court. Jackson
by Brea Baker
Abortion
Support Abortion Access With R29’s Capsule Tee Collection
As of June 24, our constitutional right to abortion no longer exists. It’s hard not to feel helpless, angry, and scared during a time like this, but for
by Elizabeth Gulino
Somos Latinx
Why We Need To Claim Abortion As A Word Without Stigma
I was 16 years old when I had my first abortion. I’d been sexually assaulted and got pregnant. I told my mom that I needed an abortion and she said no. S
by Stephanie Loraine...
Abortion Access For All
9 Posters To Bring To Your Next Abortion Rights Rally
It’s official: The Supreme Court has overturned Roe v. Wade. On June 24, people started gathering to protest against the loss of our Constitutional r
by Elizabeth Gulino
Abortion Access For All
How To Access Abortion Care Post-Roe
This story has been updated to reflect the overturning of Roe v. Wade by the Supreme Court. The Supreme Court has decided to overturn Roe v. Wade, the 1973
by Molly Longman
Abortion
What Abortion Rights Will Look Like in Your State
In a 6-3 opinion, the United States Supreme Court has overturned federal protection for abortion. While the upcoming ruling was expected, it’s only the b
by Neda Toloui-Semnani
Advertisement
Advertisement
Discover
R29 Stories & News
Watch
R29 Original Series & Films
Shop
R29's Most Wanted