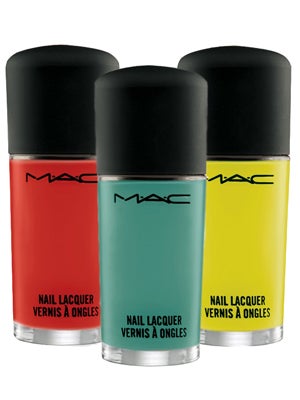 Backstage at Fashion Week just got a zillion times more awesome: For the first time ever, MAC will be doing nails! MAC senior artist Keri Blair, whose expert makeup skills have graced the faces of countless models backstage, is taking her creativity to the nails by custom designing the looks at some of the hottest shows of the season: Zac Posen, Ruffian, Nicholas K., Ohne Titel, and ICB by Prabal Gurung. In addition, she'll also be working closely with nail guru Honey at the Proenza Schouler show to select shades from MAC's forthcoming Nail Lacquer palette (we'll get to that in a minute).
Advertisement
MAC is known for their backstage presence at NYFW, but this marks the first time they've conceptualized the nail look at a show. With all of the amazing polishes they've launched over the past few years, it's definitely a collaboration that makes sense. "For me, as a makeup artist with an intense passion for all things nails, I think it seems like an obvious choice. Beauty doesn't end at the jaw line — as a team we pay as close attention to the face as the body and nails are just an extension or completion of the entire beauty/color package. We have always had great nail lacquers and now with the incredible nail team we have assembled it should prove to bring additional awareness to another great product in our line up," says Blair.
So what can you look forward to from Keri and MAC? Blair explains: "We're known for color, so be on the lookout for some great shades ranging from nudes to deep jewel tones to even some of our most beloved lip colors that will soon be available in polish form. The season has just begun, but already I know that women will be clamoring for some of our best known lip colors to don on their nails. One of my favorites is the perfect 'blurple.' For this season we are going for straight-forward glamour."
Now about that nail launch: Sources tell us MAC is going to unleash a flurry of new nail launches in 2012, including one that's a brand-new concept for the brand. Says Nicole Masson, vice president of MAC global product development, "Nails are a priority going forward and you’ll see a lot of exciting launches over the next six months. We’re really amping up the permanent shade range and introducing a product that has never been done by a brand like MAC." Let the speculation begin!
To get the scoop backstage from Keri and all the MAC pro artists, follow them both on Twitter (@MAC_Keri_B and @MACCosmetics) — MAC is new to the Twitter party, so this will be their first NYFW Tweeting backstge. We can't wait to see what kind of amazingness they're going to let loose!
Unbothered
Come Glow Up With Unbothered At Our First-Ever IRL Event!
Oh hey there, my beautiful, abundant Unbothered fam!  It has been almost five years since our foresisters founded Unbothered. Back then, it was simply
by Chelsea Sanders
Unbothered
The Met Gala Was Underwhelming But These Black Celebrities Ate
It’s the most wonderful time of year: when fashion enthusiasts and critics come together to virtually discuss the moments we loved — and hated — at t
by Venesa Coger
Celebrity Style
A Tribute To The Best Met Gala Looks Of All Time
by Eliza Huber
Advertisement
Style
Here They Are: The Best Oscars Looks Of All Time
by Eliza Huber
Unbothered
Black American Culture Was Missing From The Met Gala Red Carpet
The Met Gala, fashion’s most anticipated and glamorous red carpet event, took place last night (Sept. 13) and there’s a lot to unpack. Usually held in
by Venesa Coger
Met Gala
According To The Met Gala Red Carpet, This Is What’s Important Ab...
by Eliza Huber
Style
Every Winning Fashion Moment From The Live 2021 Oscars Red Carpet
by Eliza Huber
Style
We Did The Research & These Are The Best Golden Globe Looks Of Al...
by Eliza Huber
Fashion
How Copenhagen Put Sustainability At The Forefront Of Its Fashion...
Though not one of the major four, Copenhagen Fashion Week has, in recent years, been a hotspot for trends that matter. Between its effortlessly cool street
by Irina Grechko
Fashion
The Digital Fashion Experience Isn’t The Same — & That’s A Good T...
Ever since the pandemic put an end to many fashion weeks and high-profile shows around the world this year, the question of the fashion-minded has been, Wi
by Irina Grechko
Style
Shanghai Fashion Week Cancels Next Month’s Event Because Of...
Shanghai Fashion Week, which typically takes place after Paris Fashion Week in March, has officially been postponed due to the coronavirus outbreak. The or
by Sara Radin
Golden Globe Awards
The Golden Globes Red Carpet Is One Fashion Moment After Another
by Eliza Huber
Advertisement
Advertisement
Discover
R29 Stories & News
Watch
R29 Original Series & Films
Shop
R29's Most Wanted