Skip navigation!
Story from Politics
Whether you speak French fluently or can only just sing along with Lady Marmelade, you probably won't have a tough time guessing that Karl Lagerfeld isn't French President François Hollande's biggest fan: In this month's issue of Spanish Marie Claire, he called Hollande's fiscal policies, which involve a 75% income tax on those earning over a million euros a year, "imbécile."
To be clear, imbécile means idiotic as in "Hollande's policies are idiotic," and not "Hollande is an idiot," which many international news outlets mistranslated over the weekend (though an extrapolation from policy to policy creator isn't a huge mental leap). Editor in chief Joana Bonet asked Lagerfeld what he thought of the newly elected French President, and he replied, "He's disastrous. he wants to punish [the rich] and, of course, they're leaving. Nobody is investing. Foreigners don't want to invest any more in France — and this is not working. Besides, France — apart from fashion, jewelry, perfume, and wine — is not competitive. Nothing else sells. Who buys French cars? Not me."
Advertisement
Though Karl may not be a "salt of the Earth" type, he does know how to get himself involved with what sells. Fashion? Check. Jewelry? Check. Perfume? No.5 checks. So, we're thinking we should expect a Karl Cabernet Sauvignon in the future.... (WWD) 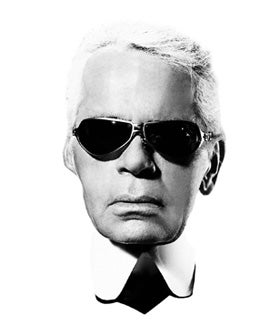 Advertisement
News
Look What You Made Taylor Swift Do (Come Out Against White Suprem...
Taylor Swift spoke out forcefully today against President Donald Trump’s incitement of military violence in the wake of protests calling for justice afte
by Natalie Gontcharova
News
The Officers Who Killed George Floyd Have Done This Before — Many...
Thousands of people have taken to the streets of Minneapolis over the last week as they grieve the police killing of 46-year-old George Floyd, with demands
by Erin Corbett
News
The Traumatized 17-Year-Old Who Filmed George Floyd’s Killi...
In the wake of mass outcry and protest over George Floyd’s death in Minneapolis, the person who brought his story to light is already experiencing harass
by Elly Belle
News
In Videos Of Racist Killings, Who Is Behind The Camera Matters
I know the exact day I stopped watching videos of police brutality; the decision wasn’t a conscious declaration, but more of a whisper in my soul: Enough
by Nylah Burton
Asian American
The Disaster Mindset Helped Asian-Americans Survive. But It’...
We joke that we've been preparing for a pandemic for our entire lives. But living like disaster is around every corner won't serve us in the long-term.
by Connie Wang
News
Twitter Labels Trump’s “THUGS” Tweet Glorified ...
This morning, we woke up to the President of the United States calling for military violence in response to protestors in Minneapolis and St. Paul who are
by Natalie Gontcharova
News
Jeffrey Epstein’s Political Connections Include A Tangled W...
Netflix just released a tell-all docuseries about Jeffery Epstein, his alleged crimes, and the intricate web of wealthy people he kept around him to ensure
by Sarah Midkiff
News
CNN Reporter Omar Jimenez Was Arrested On Live TV. The Police Who...
A Black CNN reporter was arrested early Friday morning while covering the ongoing protests on the ground in Minneapolis. Omar Jimenez was arrested and take
by Erin Corbett
News
What To Know About Tony McDade, A Black Trans Man Killed By Polic...
Amidst protests in Minneapolis over the murder of George Floyd, another person has been killed by police. This week, a Black transgender man named Tony McD
by Elly Belle
News
Jalil Muntaqim Has Been In Prison For 50 Years & Now He’s B...
Over 49 years ago, Jalil Muntaqim (formerly Anthony Bottom), who is now nearly 70 years old, is one of the longest held people in prison in New York state.
by Elly Belle
Unbothered
Your Black Colleagues May Look Like They’re Okay — Chances ...
Let’s cut to the chase. It’s been a tough few days…weeks…months.  For many people, working in the midst of a global pandemic has been
by Danielle Cadet
News
Tomi Lahren Would Like To Speak To A Manager About The Minneapoli...
Minneapolis residents are taking the streets in response to the murder of George Floyd by police. Thousands of people participated in a direct action Wedne
by Erin Corbett
Discover
R29 Stories & News
Watch
R29 Original Series & Films
Shop
R29's Most Wanted