Skip navigation!
Story from New York
When we city dwellers think of Grand Central Station, we conjure images of tired commuters, suburban bankers, or those infamous scenes from Gossip Girl. But, it turns out the landmark has a decades-old tradition that is incredibly fascinating — and oh-so-New York. Since the days when Grand Central wasn't much more than a seedy reflection of the city's gritty (and dangerous) periods, a corps of dedicated and jovial locals have been tending bar for commuters. Esquire recently hit the tracks to get the stories straight from the sources, and what they found was a hilarious and insightful slice of Big Apple history.
Advertisement
The veteran bartenders — mostly heavily-accented middle aged men from the Bronx — have seen it all, literally. From sharing the tracks with passed-out drug addicts during the crime-ridden '70s and '80s to tossing back scotch after scotch in smoke-filled club cars with the Don Drapers of the era, they served up a ritual for tri-state commuters.
Of course, now that the 'anything goes' mentality has faded — and Grand Central has been buffed and polished into a shining beacon of tourism — barkeeps are more apt to see hijinks in the form of investment bankers blowing off steam with a secret Coors Light (or three) before they head home to their families in the 'burbs. In fact, while the group of bartenders hesitates to out their loyal customers (most of whom keep their train-imbibing habits from their partners), they are quick to admit that rush hour's biggest lushes often come from the most exclusive enclaves of Westport and Greenwich. Color us surprised. (Esquire) 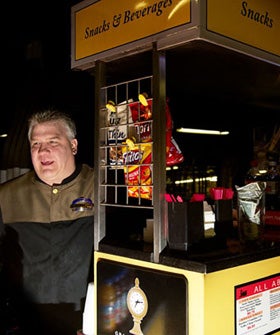