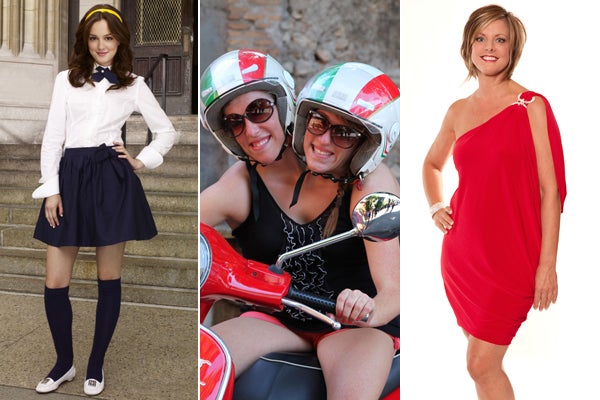 Hump: We’re nearing the end of the awkward lull between summer series finales and the return of fall TV (thank God), which means those of us with self-imposed regulations of 5+ hours of television a day are forced to feast on reruns. Bless the Style Network’s heart, though, because it took this massive schedule gap and ran with it. Namely, it's been re-airing the first season of Gossip Girl.
Speaking as someone who has read every single Gossip Girl book (which I don’t recommend bringing up on dates or, you know, to anyone, ever), the series gradually became a dilapidated hot mess as it progressed. The books were addictive — especially to me, a tween reading them at Barnes & Noble in Paramus, NJ — because the characters were still in high school, which meant their scandalous Upper East Side exploits seemed all the more thrilling, offering a glimpse into how the other half gets away with underage boozing at swanky NYC locales and has massive power struggles within its self-imposed private-school hierarchies. On the show, Serena and the gang graduated, pretended to attend college for a hot second, and now they sort of run hotels and still have not realized they should maybe try expanding their dating rosters beyond the same three people. Just a suggestion.
Advertisement
Season one Gossip Girl, though, is still amazing. Dan has a buzz cut, Chuck speaks like a normal human being rather than a poor man’s Batman, Nate is...there looking confused yet pretty, Serena giggles her way through life, and Taylor Momsen looks more like Cindy Lou Who than a goth hooker. But the best, by far, is Blair Waldorf. Leighton Meester carried that show, and the writers knew it.
In the first season, Blair got the best lines, drew power from her headbands, dealt with bulimia, and was not yet involved in the world’s most boring love story. (In the books, Chuck Bass is a questionably gay, scarf-wearing, monkey-toting, horrible person who never experiences any character growth — and he certainly does not land Blair Waldorf.) Oh, and remember when she sorta stripped in Chuck’s burlesque club, Victrola? You know you loved her. XOXO.
Marry: I’ve been completely fascinated by conjoined twins Brittany and Abby Hensel since Life ran a story about them when I was eleven. Even back then, the thought of never being able to be completely alone terrified me (imagine life as a teenager if you could never run to your room, slam the door, and sob dramatically by yourself), and I admired the twins’ impressive teamwork and optimism. I would be cursing the fates on a daily basis if I were in their shoes.
Now 22, the Hensels are the stars of a new TLC reality show called, what else, Abby & Brittany. Despite having to share every aspect of their lives, they’ve developed separate, dynamic personalities. The show is meant to demonstrate how normal the Hensels’ lives are, and — as is the case with Married to Jonas — the result is almost boring. Abby and Brittany hang out with their friends, worry about finishing college in this tough job market, and have wholesome birthday parties with ice cream fixing stations.
Advertisement
The most interesting parts of the show are the interviews the girls give where they answer the questions on everyone’s minds, such as whether they’ll receive one or two salaries when they start working. It’s in these interviews that we truly get to see what it’s like to be conjoined to another person. Not once do the Hensels bemoan their situation, and their matter-of-fact perspective about their current point in life (read: graduating college and finding a job) is that many a recent grad would find inspiring. Give the show a watch; their positive attitudes will rub off on you, too.
Kill: True confession: I cannot stop watching Dance Moms. Even worse, I continue to have emotions while watching Dance Moms, whereas I’m pretty sure the rest of the population has by now become numb to the ongoing histrionics of the group of moms in Pittsburgh who seem to have nothing else to do besides living vicariously through their daughters’ dance competitions.
The mom who inspires the most feelingz (yes, with a “z” because I feel like I should be ranting about this on LiveJournal) is Kelly, mother of Brooke and Paige. Kelly once attended Abby Lee’s dance academy and seems to think she’s still a student alongside her daughters. She refers to Paige and Brooke’s solos as “our dances” (pretty sure you’re not up there on stage with them, Kel) and is convinced Abby has some sort of vendetta against Paige having any sort of featured role. She’s given to torrents of cursing — in front of 9-year-olds, mind you — and dramatically storming out of the studio, promising to never return, only to materialize the next day. Really just a beacon of fine parenting all around, that one.

Photo: Via The CW; Via TLC; Via Scott Gries/Lifetime

Pop Culture
Jamie Lynn Spears Is Back & Telling That Zoey 101 Pregna...
Jamie Lynn Spears knows that you still blame her and her pregnancy for the end of Zoey 101. But she’s back to not only set the record straight, but a
by Natalie Morin
Movies
The Christmas Chronicles 2 Is Like The Avengers...
If you don’t think true love exists, then you haven’t heard of The Christmas Chronicles, and the fact that real-life, ionic couple Kurt Russell
by Natalie Morin
Pop Culture
Why You Should Be Especially Excited For Adele’s SNL...
We all know that Adele is a talented singer, but on the upcoming episode of Saturday Night Live, the British songstress won’t be hitting the stage as the
by Ineye Komonibo
TV Recaps
R29 Binge Club: Netflix’s Grand Army Recaps
Warning: This article contains descriptions of sexual assault. In Grand Army’s pilot, there’s a bomb — that is, a literal one. An explosion from a fe
by Lydia Wang
Amazon
The Best Amazon Prime Halloween Movies
by Kaitlin Reilly
Books & Art
20 Terrifying Books For When You’ve Already Read All The Sp...
by Shannon Carlin
Movies
Viola Davis Transforms Into The Mother Of Blues In Netflix’...
When you think of blues icons, names like B.B. King, Ray Charles, and Muddy Waters often come to mind almost immediately, but we wouldn’t have blues as w
by Ineye Komonibo
Pop Culture
Matthew McConaughey Tells The True Story Of How His Dad Died Duri...
When it comes to Matthew McConaughey — Magic Mike star, Texan icon, Wild Turkey Guy, king of the over-the-top Lincoln commercial speeches — he could te
by Natalie Morin
Documentary
The Haunting True Stories Behind Unsolved Mysteries’...
by Sarah Midkiff
Music
Lovecraft Country’s Soundtrack Boasts Blues Classi...
by Kelsea Stahler
Pop Culture
Meghan Markle & Prince Harry Recreate Their First Official Portra...
It’s been awhile since Meghan Markle and Prince Harry have been in the spotlight, but the royal pair is gearing up to be the center of attention in the u
by Ineye Komonibo
Best of Netflix
Everyone Is At Home Watching These 10 Shows & Movies On Netflix R...
by Ineye Komonibo
Discover
R29 Stories & News
Watch
R29 Original Series & Films
Shop
R29's Most Wanted