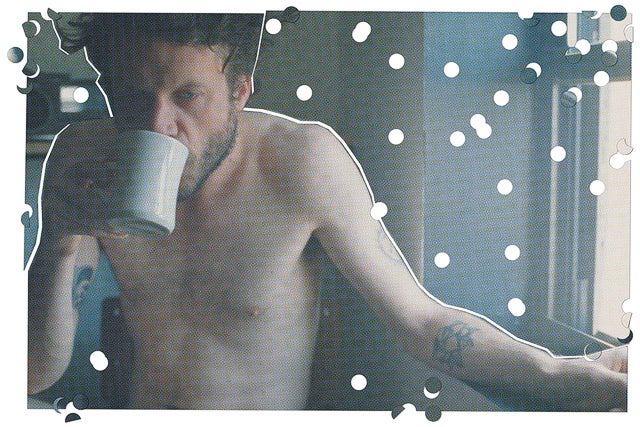 Photo: Courtesy of Emma Garr. Illustrated by Ammiel Mendoza.
One thing you can guarantee when sitting down with Josh Tillman is that he's going to give it to you straight. The singer-songwriter and ex-Fleet Foxes drummer, who has released music under the monikers J. Tillman and Father John Misty, is by turns darkly serious, brashly candid, and very funny. Though much was made about his decision to switch to the Father John Misty nom de guerre when he released 2012's Fear Fun, Tillman insists that a different name doesn't mean he's playing a part. "I felt like the more I explained to people that [Father John Misty] is not an alter ego, the more they interpreted it as an alter ego," he laughs. A year later, Tillman is readying the release of his second record under the Misty moniker. We caught up with him to talk falling in love, the role of an artist, and the one drink he'd never tire of.
Advertisement

The Right Headspace
"I got to the point where I was only interested in writing in my conversational voice or writing in my internal monologue. Something that I started to notice over time was that, for the most part, I really enjoy singing those songs — it's like having a joke that I really like or telling a personal story. I don't really have to get into this romantic or suicidal headspace to perform the music. Over time, the songs are just a beloved and familiar personal anecdote; it doesn't require a whole lot of angst. Now, it's been so long since I wrote [the song's on Fear Fun], I feel nostalgic about them and the time that they were written."

J. Tillman vs. Father John Misty
"That talking point sort of eclipsed the actual content of the songs. I got to discuss what songs mean along the way, but people were wanting to hear about the more broad strokes. For the most part, I think people really do understand it, but music journalists were maybe a little slower on the uptake, but that's not rare. Anytime I started an interview, and someone was like [starts speaking in a journalist voice], 'So, who is Father John Misty?' Then I'd be like, 'Oh my god, I've failed completely. No one understands what the fuck this is.' I think that most people generally gravitate toward the laziest version of the truth. And, if I dare say so, it's kind of the artist's job to draw people away from the laziest version of the truth."

Breaking Tradition
"On the album when there are country moments, those are more like snippets of my subconscious or something. I don't consider myself a member of the lineage of everything. Of course, I am; of course, everyone is. Everyone is kind of writing the same human body of music that we're all a part of. It's all kind of this one global body of work. But, if you mean, do I think of myself as a torchbearer for a certain genre of music, I don't. That's just too depressing for words."

Not Your Typical Love Song
"I think the ideal definition of an artist is someone who has some vested interest in losing life and limb in the pursuit of the real truth. I've been writing new material for the past two years, or something, and over that period of time, I got really mired in some kind of carnal, hilarious adventures with women, and then I fell in love with someone. A lot of people think of falling in love as this banal, sentimental thing. But, I experienced it as something that has profound gravity — existentially and otherwise. The album is rooted in this polarity between carnality and divine love. Typically in music, love is rooted in vernacular clichés, but I wanted to write about love in a way that was real...That wasn't just sentimental emptiness. I would go so far to say that's it a very unconventional love album."

Favorite Drink
"I'm not drinking a whole lot these days, but if I could only drink one drink for the rest of my life, it would be Bulgarian Rose Water."