Skip navigation!
Story from Entertainment
First New York State, then President Obama, and then...comic books? Acceptance of gay marriage is (finally) breaking through to one of the last cultural frontiers, the superhero. In the latest issue of Marvel's Astonishing X-Men, out Wednesday, the openly-gay protagonist, Northstar, popped the question to his longtime love Kyle Jinadu. Although the book has barely been out for 48 hours, it is already on its way to becoming a collector's edition. Thor Parker, of local shop Midtown Comics, details the popularity: "You're seeing people coming in ask for an issue by name and number, which usually only happens when something like this is going on."
Advertisement
The fictional characters will wed in a ceremony in Central Park in issue number 51, out next month, an edition that is also expected to break sales records. To commemorate the occasion, Midtown Comics is planning on performing a real-life same-sex ceremony in the store on the same day the issue is released.
Although Northstar came out of the closet back in 1992, the fact that he will finally be making it official (and legal!) with his partner is a true sign of the times. Same-sex marriage support is at an all-time high (thanks, POTUS!), and it is heartwarming to see it getting the publicity it deserves, even if it's a little late. (The Guardian) 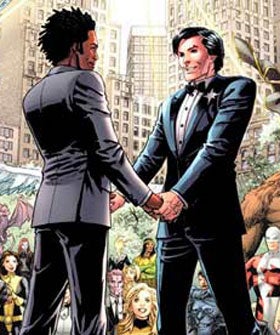 Movies
Jo Koy & Easter Sunday Helped Me Better Understand My Fi...
In case it isn’t clear: Jo Koy really, really loves his mom. The comedian/actor has skyrocketed to fame over the past few years, thanks in large part
by Sara Tan
Movies
The Scariest Part of Bodies, Bodies, Bodies Isn’t the De...
Drunk and high at a rich kid mansion, Bee (Maria Bakalova) tries to make sense of the friends she has just met who have decided to make the most of a hurri
by Claire Hambrick
Unbothered
Brittney Griner Sentenced To 9 Years In Russian Prison For Drug C...
After being detained by Russian police at Sheremetyevo Airport on drug allegations in February, WNBA athlete Brittney Griner has officially been sentenced
by Ineye Komonibo
Advertisement
GG Good Game
Hot Tub Streamer Amouranth Is Using A Bikini To Build An Empire
The idea of people going online to watch NSFW material isn’t anything new. For decades, viewers have been covertly opening incognito tabs on their laptop
by Katherine Singh
Somos Latinx
Melissa Barrera’s Resolve Prepared Her to Survive in the Wilderne...
After wrapping her latest starring role on Netflix’s limited series “Keep Breathing,” Melissa Barrera hasn’t only solidified her spot in Hollywood
by Ashley Garcia Lez...
Somos Latinx
Juliana Joel Made History Playing the First Trans Character on Di...
Even while talking through Zoom with a spotty Internet connection, Juliana Joel’s confidence, charisma, and undeniable charm beams through the screen and
by Olivia Zayas Ryan
Unbothered
Legendary Star Leiomy Maldonado On Ballroom And Boundari...
Imagine a place where you can be anything you want to be and fully embrace who you are — without judgment. For Black folxs and members of the LGBTQ+ comm
by Kourtney Pope
Unbothered
Why Isn’t Queen Latifah Getting The Rom-Com Royalty Treatme...
Welcome to Love Like This?, a romance column where we, Kathleen Newman-Bremang and Ineye Komonibo, revisit some of the most romantic — or not, in hindsig
by Kathleen Newman-B...
Unbothered
When A Married Lagos Man Breaks Your Heart: An Exclusive Excerpt ...
Just how mad are the men in Lagos? It’s a question Nigerian author and actor Damilare Kuku explores in 12 short stories in her first novel, Nearly All Th
by Damilare Kuku
Movies
Not Okay’s Final Scene May Change The Whole Movie For You
Spoilers ahead. It’s not hard to dislike Danni Sanders. With her money piece bangs and colorful plastic rings, the lead character in Hulu’s Not Oka
by Katherine Singh
Unbothered
Beyoncé Is Back — What A Time To Be Hive
As a Black girl from Houston, liking Beyoncé has always been part of my culture. After all, she is one of us, born and bred in the same streets that we gr
by Ineye Komonibo
Unbothered
Yes, We’re Still Crying Over The Wakanda Forever Trailer
The trailer for Wakanda Forever, the sequel to Marvel’s critically-acclaimed, fan-favorite film Black Panther, is finally here and its drop,  brough
by Wisdom Iheanyichukwu
Advertisement
Advertisement
Discover
R29 Stories & News
Watch
R29 Original Series & Films
Shop
R29's Most Wanted