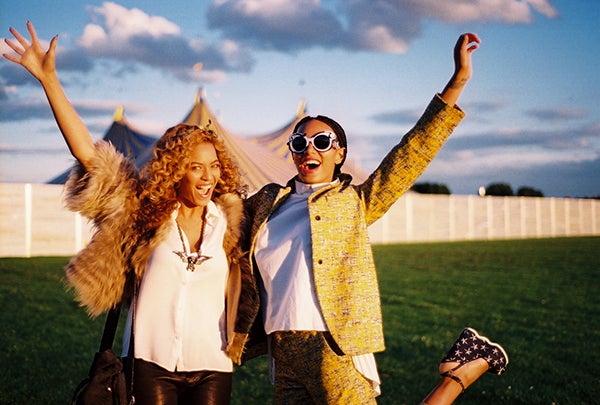 Celebrities and social media are a tricky thing. No one really knows whether or not stars like Katy Perry are actually tweeting or if their publicist is. Their Facebook pages don't allow for "friends," but do allow for likes. Social media is merely a method of further promoting their image, and their accounts often feel prescribed. The Knowles sisters, however, besides knowing how to treat designer loans, know how to authentically use the Internet.
Last April, Beyoncé started a Tumblr, and almost shut down the Internet — we common folk finally caught a glimpse into the mysterious life of Queen B. Everything from her island getaways with Jay to smoking cigars to spur-of-the-moment photo shoots in Louboutin's and museum visits was documented and uploaded. Solange has been on Tumblr, too, since November of 2011. Between pictures of her son and festival romps with B, there's a genuine sense that she's in full control of her comparably different, more hipster, luxe DIY life just as Beyoncé is of her equally polished existence. Each blog captures the respective Knowles sister's aesthetic. Solange is documenting her Brooklyn world through unabashed sharing of music and disposable camera scans. Bey is showing the breadth of her work, and showing off a little bit because, hey, it's Bey. They're refreshing niches of the Internet that make these superstars a little more relatable, but don't go saying they're just like us because, let's be real here, they aren't really.

Style
24 Black Influencers That You Should Be Following
by Eliza Huber
Style
Sophia Bush Is Selling A Look From One Of Her “Absolute Fav...
Like many of us, Sophia Bush is using her free time in quarantine to Marie Kondo her wardrobe, but, unlike the items gathering dust in the back of our clos
by Eliza Huber
Style
Hailey Bieber’s Reformation Dress Is Perfect For Summer — &...
This year Memorial Day Weekend wasn’t all parades and barbecues like we’re used to, but, even with the change of plans, Hailey Bieber found not one, bu
by Eliza Huber
Style
Here’s What Your Favorite Celebrities Wore During Memorial ...
by Eliza Huber
Style
7 Meghan Markle-Approved Fashion Brands That Are Also Affordable
by Eliza Huber
Style
Olsen Twin Sets The Bar For Social Distancing Style
From their pastel-colored lenses and bandanas circa 2000 to the black shapeless frocks they’re known for today, the Olsen twins have been our style icons
by Eliza Huber
Style
Meghan Markle’s Go-To Dress Is 50% Off At Nordstrom
We’ve learned every TikTok dance, box-dyed our hair pastel pink, and watched all 12 episodes of Normal People — twice. Next on our list of distractions
by Eliza Huber
Fashion
Villanelle Is A Carrie Bradshaw For Our Disillusioned Generation
Sex and the City’s Carrie Bradshaw walked so Killing Eve’s Villanelle could run. Sure, Bradshaw can be considered a predecessor to many of TV’s antih
by Cait Munro
Style
Meghan Markle Just Gave This ‘90s Jewelry Trend Her Stamp Of Appr...
Summer is almost here, and with it, comes all of our favorite kitschy, nostalgic accessory trends: seashell jewelry, fruit-shaped handbags, rhinestone-crus
by Eliza Huber
Style
Here’s What You Would’ve Seen On The Met Gala Red Carpet Last Night
by Eliza Huber
Celebrity Style
Meghan Markle’s Baseball Cap Marks The Beginning Of A New Era
It’s only been a month since Meghan Markle and Prince Harry swapped out their Sussex digs for a house in the Hollywood Hills, but they already look like
by Eliza Huber
Style
Pillows For Spring: Groundbreaking
If you, like us, have been receiving near-constant reminders from your phones that screen time is at an all-time high, you’ve probably already caught a g
by Eliza Huber
Discover
R29 Stories & News
Watch
R29 Original Series & Films
Shop
R29's Most Wanted