Skip navigation!
Story from Fitness
Illustrated by Zhang Qingyun.
Did you think about waking up early to go for a run this morning, only to hit snooze and postpone your session until after work? (Don't worry; we, too, are guilty as charged.) Mornings are rough enough — why not wait and exercise after a day of heavy caffeinating? And, according to new data, it seems these exercise habits are in the majority — stateside, at least. Most Americans prefer to save their runs for the evening hours.
The most popular time for logging miles in the U.S. is between 6 and 7 p.m. These findings are part of an analysis of data logged with the tracking app RunKeeper, along with the team at Runner’s World magazine. The full report also looks at international runners and provides a breakdown of the most popular times to work up a sweat in each country.
Advertisement
Like Americans, it seems that most people around the world prefer to sleep in — the exception being India, the only country that notes more morning runners than evening ones. Why? Getting up and out is a way to avoid the heat and traffic congestion, notes a runner and former editor of Runner’s World who now lives in Mumbai. On the flip side, runners in China, Korea, and Japan hit the roads later (between 8 and 11 p.m.) and 6% of Korean runners log their miles between 11 p.m. and 1 a.m.
Falling firmly in the middle of the lark vs. night-owl debate are runners in France and Switzerland, who enjoy lunchtime workouts. Most Swiss shops have a two-hour break between 12 and 2 p.m., which leaves plenty of time go for a midday run, shower, and refuel with a nutritious meal.
The weekends are a different story: Saturday and Sunday runs occuring between 7 and 11 a.m. are the most popular in America. Without commutes and work dominating your morning, you can get exercise out of the way with plenty of time left to get stuff done — be it errands, day-drinking, or both. For a quick overview of popular running times, check out the pie chart below. And, it being Thursday, we'll expect to see you on the roads after work. 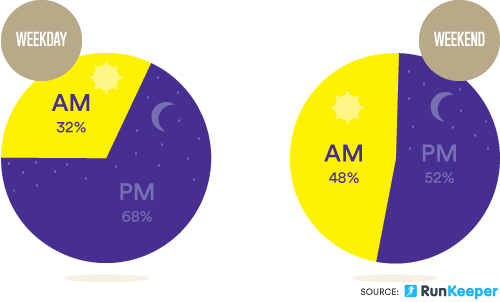 Photo: Courtesy Of RunKeeper.
Workout Clothes
The Best Underwear For Your Sweatiest Workouts
by Cory Stieg
Workout Clothes
The Best Workout Clothes & Sneakers Flexing On Amazon
by Kate Spencer
Fitness
Everything You Need For The Best Home Gym Equipment, According To...
by Karina Hoshikawa
Advertisement
Wellness
The 7 Best Fitness Trackers To Monitor All Your New Year’s ...
by Karina Hoshikawa
Fitness
What Are The Best Gym Bags For People On The Go?
by Emily Ruane
Cyber Monday
From Align To Wunder, These Are The Best Lululemon Cyber Monday D...
As the ultimate destination for high-quality workout clothes and performance gear, Lululemon doesn’t need to get in on Cyber Monday action — but th
by Karina Hoshikawa
Gift Guides
The 13 Best Fitness Gifts Your Active Friend Will Actually Use
by Charlotte Lewis
Most Wanted
The Best Lululemon Gifts To Outfit Everyone On Your List
We know you already spend a lot of time (and, let’s be honest, money) at Lululemon, browsing the signature ultra-soft leggings and rainbow-hued crop tops
by Karina Hoshikawa
Dedicated Feature
How A 2-Week Challenge Transformed This Non-Runner Into A #RunTok...
Seven years ago, when Naomi Adeyefa was a 19-year-old college student, a coworker presented her with a challenge: to work her way up to running two miles i
by Jenna Igneri
Most Wanted
I Tried The $499 Oura Ring In The Name Of Wellness
In my almost 30 years on this planet, I’ve witnessed cassette tapes be replaced with CDs, which were replaced with MP3s, which were de facto replaced by
by Karina Hoshikawa
Most Wanted
Amazon’s Wellness Tracker Is Under $50 During The Prime Ear...
Super-Sale Alert: The Amazon Halo View featured in this story is $35 off for the Prime Early Access Event! For more insider information on AmazonR
by Karina Hoshikawa
Dedicated Feature
A 29-Day Challenge That’ll Inspire You To Run
by Sara Tan
Advertisement
Advertisement
Discover
R29 Stories & News
Watch
R29 Original Series & Films
Shop
R29's Most Wanted