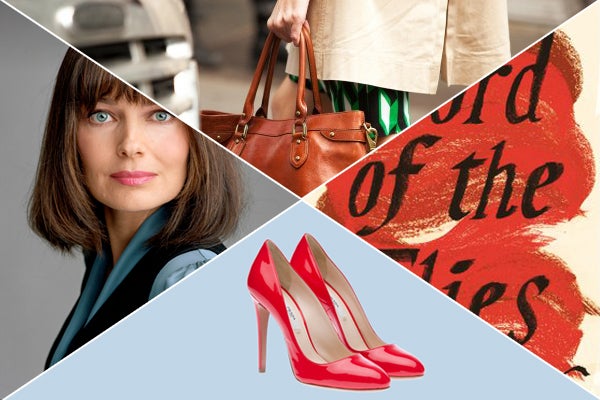 If you're like us, you're already, albeit sadly, starting to push your summer dresses to the back of your closet. Not that it's not still hot as Hades out there, but, I don't know, with all the decadent prints and plush textures taunting us in those fat September issues, our summer pieces just seem a bit dull and droopy in comparison. But before summertime checks out completely, we've got a few more steamy R29 highlights to keep the A/C — and your interest — on high.
First off, did everyone catch photographer Timothy Greenfield-Sanders' utterly awesome documentary, About Face: Supermodels Then & Now? Carol Alt, Isabella Rossellini, and Beverly Johnson are just a few of the stunners to go on the record about health, happiness, and Botox, and ultimately what it's like to be a gorgeous women getting older in an eternally youthful world. In addition to watching the film, which was an official selection for the 2012 Sundance Film Festival, be sure to give a listen to Terry Gross's NPR radio interview with Greenfield-Sanders and Alt, which is equally good (our favorite takeaway: 90 percent of people look better if they're photographed on their left side...weird, but we're always happy to learn a new trick when it comes to taking a great picture).
Advertisement
Speaking of getting older, ever wonder what your wardrobe should be saying about you as you glide into a new decade? Whether you're a fashion-forward tenth-grader or turning the big 4-0, there are a handful of critical buys that can help define who you are becoming and who you hope to be, both in your personal style and in your life. Like a sort of closet compass, that's what our new feature, Rites of Fashion, aims to guide you through — getting older while getting more comfortable in your skin and, of course, in your sense of personal style.
And, you know, wisdom doesn't always come with age. Just ask this six-year-old who, very thoughtfully, reveals what the covers of literature's mostly widely recognizable book covers (Animal Farm, Catcher in the Rye) said about their contents. In some cases, her imaginative synopses are even better than the real thing. (Umm, we'd like to have her drop in at our R29 Reading Club.)
Finally, is it us, or are you all completely dumbfounded by the whole gluten-free phenomenon? There's a lot of scary, and possibly questionable, information out there about the potential adverse effects of eating wheat and gluten these days (weight gain, headaches, and inflammation, among others). And given we have not two, not five, but 10 gluten-free R29ers in our ranks, we decided to deconstruct this new wellness topic and find out why wheat is such a hot health topic. Speaking of hot one last time….just a few more weeks before those sweet fall breezes are coaxing us out of our summer (gluten?) haze. Nope…we can't wait either.

Photo: Courtesy of HBO; Photographed by Mark Iantosca; Via Faber; Via Prada

Most Wanted
20 Latinx Brands To Shop This Latinx Heritage Month (And Beyond)
by Mercedes Viera
Fashion
Costume Designers Are Stars On Social Media. So Why Aren’t ...
It’s been 73 years since the first Oscar for Best Costume Design was awarded. Back then, the category was divided into two awards — for black-and-white
by Frances Solá-Sant...
Most Wanted
Found: 32 Pairs Of The Absolute Softest Leggings
by Amanda Randone
Advertisement
Deals
33 Free People Hidden Sale Gems That Are Perfect For Layering
by Mercedes Viera
Fashion
34 Matching Sweatsuits For Living Your Best Stay-At-Home Life
Here are stylish sweatsuit sets so comfy you won’t want to change out of them.
by Truc Nguyen
Most Wanted
A Definitive Style Guide To The Best Cardigans For Fall
by Amanda Randone
Plus-Size Fashion
17 Loose Plus Size Dresses That Will Have You Twirling Into Fall
by Emily Ruane
Style
We Found A Wearable Alternative To This Season’s Most Risqué Goin...
When celebrities first started wearing pin tops earlier this summer, we were skeptical. How is a top held together by a barely-there slice of metal suppose
by Eliza Huber
Shopping
The 10 Best Rain Boots, Ranked & Rated By Wet-Weather People
by Jinnie Lee
Shopping
34 Fashion Gems On Our Shopping Team’s Fall Wish Lists
by Jinnie Lee
Fashion
Traditional Garments Are Rarely Recycled. This Brand Is Hoping To...
Clothing is a cultural touchstone for communities around the world. Traditional ceremonies, from weddings to quinceañeras,  revolve around a particul
by Frances Solá-Sant...
Dedicated Feature
H&M’s Latest (& Sustainable) Denim Drop Confirms We’re Reliving T...
Thanks largely in part to TikTok and the natural human response of “when the going gets tough, the tough seek comfort,” ’90s style has ha
by Chelsea Peng
Advertisement
Advertisement
Discover
R29 Stories & News
Watch
R29 Original Series & Films
Shop
R29's Most Wanted