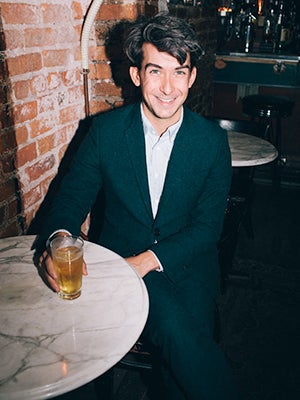 Our resident relationship/men's fashion/straight-guy-gives-advice guru Elliot is taking on your personal quandaries and giving you his answers. Check out the third round of Q&As below and be sure to send your own questions for Ask Elliot to submissions@refinery29.com.

"I trust my boyfriend and consider myself to be a cool girl, but I found myself furious when he admitted to getting SEVEN lap dances during a bachelor party 'weekend with the boys.' I know it's part of the deal, but I just don't like the idea of seven different girls rubbin' up on my guy. Am I being a crazy girlfriend or does that sound excessive?"
There is not a small amount of pressure to spend big and spend often when you're at a strip club with a bunch of your homies. Add booze, general baseline masculine horniness, a few rounds of peer pressure, and the predatory nature of professional dancers into the mix, and you can see how two dances become five become seven. On another level, he's just reinforcing his bonds with his bros. Let him live a little. Boys will be boys. Bachelors will be even worse. And then it's all over and back to normal. Editor's note: When we published this, we had quite a heated in-office discussion about how our own staffers (both male and female) would respond to their S.O.s going to strip clubs and buying lap dances. Some thought it was completely benign — if not immature, while others said that it was grounds for breaking up. We totally get that the spectrum of feelings about strip clubs are wide and diverse, but what's most important is that your partner know how you feel and shouldn't compromise your trust. And, if he/she feels so strongly about a lap dance to turn it into a bigger thing, well, you're probably dealing with a larger issue.

"Why do you (men) always text instead of call?"
Because emojis now allow us to express very deep feelings through frogs, crowns, two kinds of ambulances, thumbs, and smiling piles of doo-doo. Really though, many dudes get insecure about how their voice sounds on the phone. A real-life dial can leave us open to sounding dorky, clunky, and nervous. And since we have not yet learned that many a modern lady actually find these little ticks endearing and cute, we opt to use the path of least resistance and just send a text. This, however, is entirely inexcusable for the following situations: setting up a first date, wishing you a happy birthday, or asking if he can break plans. A real man picks up the phone for those things.

"So, I had some fun at Coachella the other week. What's the etiquette for getting in touch with someone you hooked up with at a music festival?"

"First, kudos to you to even wanting to get frisky after standing out in the sun for hours in 100+ degree heat. That's commendable for sure. As for your hook-up, I am assuming you got his name and number, right? If so, sending a simple text along the lines of "that was fun, hope to see you again soon xo" would do the trick. Play it cool but not too cool. Maybe pepper it with a "call me soon" or "let me know what you are doing this week" if you actually want to see homeboy again. If you didn't get any info from him, you might have to let him go free and chalk up your festival rendezvous to the irresistibly sultry tunage of Grizzly Bear and/or Skrillex and leave it at that. It's not like you were going to have any Coachildren with him, ya know?

Sex
17 Sex Toys That Make Unforgettable Holiday Gifts, According To A...
by Mary Frances Knapp
Somos Latinx
Dear Doñas, the Solteras Don’t Want Your Pity
I’ve always been a fan of the holiday season. I love bringing out my fall and winter wardrobe. Since I live in California, this usually looks like cozy s
by Jacqueline Delgad...
Sex
How To Navigate Unique Fetishes In Relationships, According To A ...
I have the delightfully unique job of being a sex coach specializing in working with people with fetishes. My work involves helping folks to embrace their
by Niki Davis–Fainbloom
Advertisement
Body
6 Signs You Just Had An Orgasm
You might have heard an orgasm described as a vaginal sneeze or called “la petit mort” — French for “the little death.” And though both these are
by Erika W. Smith
Sex Tips
How To Store Sex Toys, According To Sex Experts Who Have Way Too ...
by Erika W. Smith
Gift Guides
The 11 Best Vibrators To Gift Everyone On Your Holiday Shopping List
It’s officially that time of year when we show appreciation to our friends and families with tokens and gestures in the form of presents. I don’t k
by Charlotte Lewis
Somos Latinx
What’s a Matatana? Just Look at My Dominican Abuelita
I recently turned 29, the last year in the chapter of my life labeled my twenties, and I’m finding myself grieving and rebirthing. This isn’t unusual f
by Melania Luisa Marte
Cyber Monday
These Cyber Monday Deals From Womanizer Will Make You Scream (Wit...
If you missed out on Black Friday sales, don’t worry. Cyber Monday sales are the perfect time to treat yourself and finally click purchase on that ju
by Charlotte Lewis
Cyber Monday 2022
The Best Cyber Monday Deals On Sex Toys That Have Us Buzzing
Cyber Monday sales are always plentiful with deals on everything from beauty favorites to mattresses and apparel, but did you know it’s also a great
by Charlotte Lewis
Cyber Monday
The Lovehoney Cyber Monday Sale Has Arrived With Best-Selling Sex...
The nights are drawing in and the temperature is plummeting. You deserve to treat yourself — to some more me-time, if you will. And what better way to do
by Esther Newman
Black Friday
These Black Friday Deals From Womanizer Will Make You Scream (Wit...
Black Friday sales are the perfect time to treat yourself and finally click “purchase” on that just-out-of-budget splurge item you’ve had
by Charlotte Lewis
Horoscope
The New Moon In Sagittarius Is Your Sign To Take Chances
If you’ve been feeling lethargic, ambiguous, or uncertain about the future (due to the current transit of Mars retrograde), the new moon in Sagittarius t
by Lisa Stardust
Advertisement
Advertisement
Discover
R29 Stories & News
Watch
R29 Original Series & Films
Shop
R29's Most Wanted