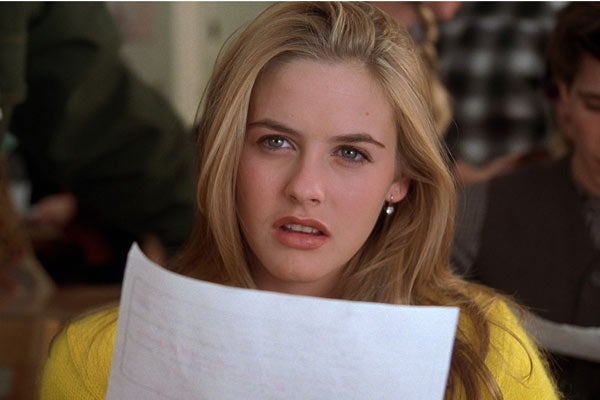 Our love for Clueless knows no bounds. Let’s just get that out of the way from the get-go. We know every line, we remember the birthday-party trip when we went to the theater with friends to see it the first time, and we definitely don’t flip the channel any time we catch it on TBS.
So, it’s no surprise that we leaped at the opportunity to interview Amy Heckerling, the genius mind behind pretty much all of our favorite one-liners of all time, to talk flashes of brilliance, her new movie Vamps (also starring Alicia Silverstone, and OnDemand now), and what it’s really like to push to get a movie made when nobody believes in you. Ahead, our chat with one of our idols — who certainly didn’t disappoint.
Advertisement

Do you have a favorite scene or one-liner from Clueless that stood out as a moment of greatness for you?
"It's not like a moment of greatness — it just wrote itself — but it’s the freeway scene. I drive on the freeway, and every now and then, you just find yourself in a lane that you can't get out of. Then I just scream and cry until I can get off. It's like you're railroaded into being on it, and you just want to get off."

When you were writing it, or making the movie, did you have any idea of the kind of success it might see?
"No. When you tell people a story or show them a script and you don't think that you're going to do something that will last forever. You're going, 'Oh please! God let me make this somewhere. I really think it could be good.' So, that's where I'm coming from at the beginning of any project."

Do you ever get tired of Clueless fans quoting the movie to you, day and night (I imagine)? Do you ever want to distance yourself from it?

"You know, it would be kind of nasty to not like people that like you. That's what you do it for. You want to reach people and then have them come back and go, 'Hi! I was reached.’ You’ve got to be happy about that."

We had a lot of fun watching Vamps. It’s so great to see Alicia Silverstone and Krysten Ritter play off each other as different generations of vampires. What was the genesis of this idea, for you?
"You know, we’re always wandering around thinking about what the hell is wrong. But then I thought, well, rather than thinking about what's wrong, why don't I think about what a happy way to live life would be? What are the things I like? And I thought, I used to like, on weekends, to run around town and go to clubs and dance and I liked all the new punk music and new wave stuff. I liked going to school and taking classes, ones that were interesting to me, and I liked hanging out with my friends in college, staying up all night talking about things. Then, suddenly, they had jobs and families and they were gone. But I'm a night person. So, I thought, ‘Well, that would be great: I really want to be a vampire. I want to have all that fun that's part of how you would behave in your 20s, 30s, or late teens. Then I thought, but what about if you had to kill people? I don't want to do that. So, I remembered in Anne Rice's book, the character was just able to drink blood from animals. And I thought, ‘I would give up food if I could have that other life.’ And from there, I worked out a whole thing about how a vampire life would work.

Advertisement
"Then I thought, well I have cold hands. So, what if I were a vampire? Then they'd be really cold, and everything is based on touch screens now. So, how do you do that if your fingers are always cold? At ATM machines, how do you get your money? And I would think of all these mundane problems a vampire would have in the modern world. Then I started to build from there."

Where did you go out in NYC back then?
"It's funny, I didn't have a lot of money when I was a student. So, [a lot of the time] when people would all be going out to some place I figured I better not because I couldn't be chipping in. Instead, I loved the museums. As soon as I'm done with all these interviews, the Museum of Modern Art is open late and "The Scream" is there so I'm gonna run over. I was an art student before film school and I'm still an art nerd." 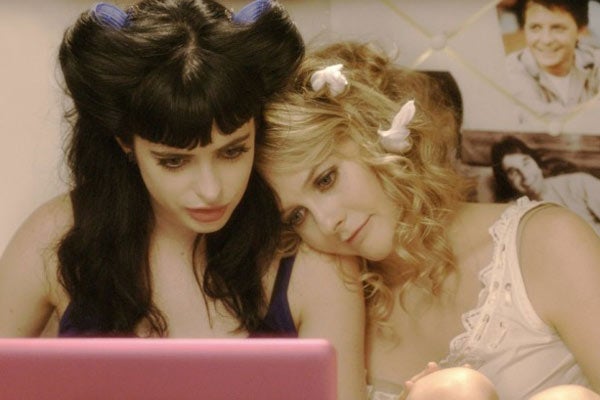 You wrote this movie before Twilight and True Blood, and before The Vampire Diaries was adapted for TV. Is there anything in those vampire stories that you like? Or do you loathe them all?
"Well, you know, I would take offense at the things that I think are breaking the rules. I'd see Coppola's Dracula or the Twilight movies, and the vampires would walk outside, and it wouldn’t be dark, and I'm thinking, 'Hey!' But, you can't be the person yelling at the TV about what it's doing wrong. Everybody sets their own parameters and rules and plays within those lines. As far as what I liked, I haven't watched True Blood, except for a few episodes while I was shooting because I normally don't have HBO. But I did see the Twilight movies. I saw the first one in theaters and the others on On Demand. I don't know if I've seen all of them, but there was a lot of sparkling. The thing is, I think it's adorable, so I'm definitely on Team Ed. I wouldn't say, 'Oh wow. I love those,' but if I was a teenage girl and I saw him, I could see what would happen."

So, you kinda get it?

"Well, yeah. Sure. I could see one of those kids from today watching The Monkees, and going, 'What's the big deal?'. I guess when you're really young, it's cute."

So, in addition to having a really smart script, you have such an amazing cast here. Does that just come together once your name is involved?
"We had a limited budget. So, even if you hear, 'Yes, Kevin Spacey wants to be in this movie but he wants a million dollars, [you have to think,] ‘Well, that's like a big percentage of what the entire budget is! I love Kevin Spacey but...this is not the kind of movie where you're paying that amount of money. So, who else can we get?’ I wasn't working in that [big-budget movie] world. And then you also have agents saying, 'This person is really hot. We don't want them doing a low-budget movie,' and then, the next year they're not so hot. But then, other people that you've always loved and wanted to work with, it happens to work out with their schedules, like Malcolm McDowell and Dan Stevens, and they're willing to come to Detroit and to work for the amount of money and as hard as you need them to be working in that time period. So, in that respect the casting was great."

That idea of dealing with logistics and schedules and industry politics — what’s the hardest part of it when you’re just trying to get great movies made?
"The one thing you always have to think about, which I don't want to think about, because it's a creativity killer, is: Is your stock up or down? I don't like always having to get my report card and be told I'm good or bad. That’s another reason I only like being up at night when all the chatter shuts off. I'm just able to think of ideas and not think of how much everyone hates me for one reason or loves me for another one when really they don't even know me. If I can shut out their chatter and think of something great then they'll like me even if they didn't always."

Vamps is available OnDemand and in stores now!Photo: Courtesy of Anchor Bay Films