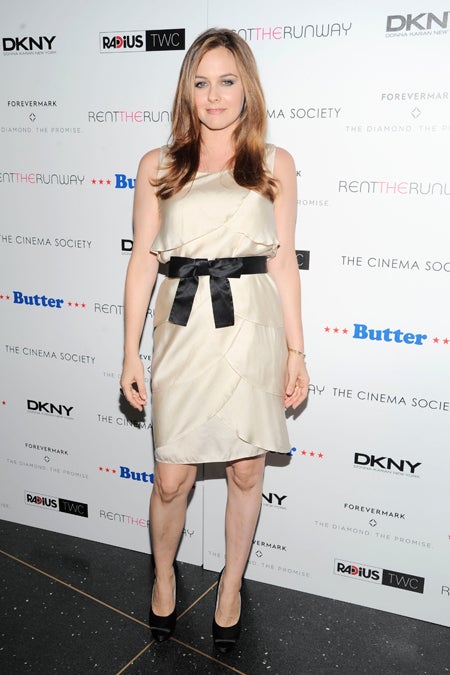 Let's be clear: Alicia Silverstone just stars in a movie called Butter, she wasn't actually spreading it on a piece of toast. Hosted by The Cinema Society, DKNY, Forevermark, and Rent The Runway, the film, a political satire comedy revolving around butter-sculpting contests (in case you didn't know, it's like a HUGE thing in the U.S.), premiered last night with its impressive cast in tow, including Olivia Wilde, Jennifer Garner, Ty Burrell, and Ashley Greene.
However, our focus was on Silverstone, dressed in a (um, buttery?) creme-colored, tiered frock — though, it wasn't because of our feelings toward Clueless or because we think she'll make an awesome vampire. It was because we couldn't help but wonder what a vegan would possibly do in a butter-sculpting competition. Is it okay to play with your food if you don't actually intend to eat it? Naturally, we asked The Kind Life author what her alternative would be in the highly competitive world of butter sculpting. "Earth Balance Butter!," she informed us.
Advertisement
Trust us, we never doubted her opposition to dairy, and as co-star Wilde filled us in, no butter was actually used in Butter — rather, butter wax. Aha, mystery solved.
Ready to see Silverstone act in the ironically named movie? Butter is currently available On Demand and at iTunes, and will be in theaters October 5. For a few instant laughs, check out the trailer, here.