Skip navigation!
Story from Fashion
Birkenstock and Opening Ceremony are known for coming up with creative spins on cult-favorite shoes. See: The glittery Arizona sandals and the neon-hued Zurich sandals that resulted when the two brands collaborated in 2018 and 2019, respectively. On Monday, the two companies teamed up again for a new drop.
The two partnered with the Magritte Foundation and used the works of the late Belgian artist René Magritte as inspiration. The collection includes two new styles of the Birkenstock Boston clog, featuring Magritte’s most celebrated paintings “The Empire of Lights” (1954) and “The False Mirror” (1929). One clog features an eye observing a blue sky, while the other displays a picture-perfect sky over a dark street.
Advertisement
“We founded Opening Ceremony with the goal of celebrating creativity in all forms,” said the brand’s founders Carol Lim and Humberto Leon in a press release. “As long-time admirers of René Magritte’s surrealist works, we couldn’t be more excited about reinterpreting 'L'Empire des Lumières' and 'Le Faux Miroir' for Birkenstock.”
Although it may seem like a surprising influence, this is actually the second time the two brands used the artwork of Magritte in their designs. Back in 2014, Opening Ceremony and Birkenstock released a Boston clog featuring “The Lovers,” “Sheherazade,” and “Double Reality.” The artist, who died in 1967, has previously inspired other fashion designers like Olympia Le-Tan, who launched a capsule handbag collection inspired by the artist in 2016, and Rei Kawakubo, whose Bare Feet shoes were directly inspired by his 1935 painting “The Red Model.” For Birkenstock, this capsule collection follows other designer collaborations this year, including Jil Sander, Proenza Schouler, and Rick Owens.
Available now, the two Boston models retail for $180 and are available online and in select Birkenstock stores.
At Refinery29, we’re here to help you navigate this overwhelming world of stuff. All of our market picks are independently selected and curated by the editorial team. If you buy something we link to on our site, Refinery29 may earn commission. 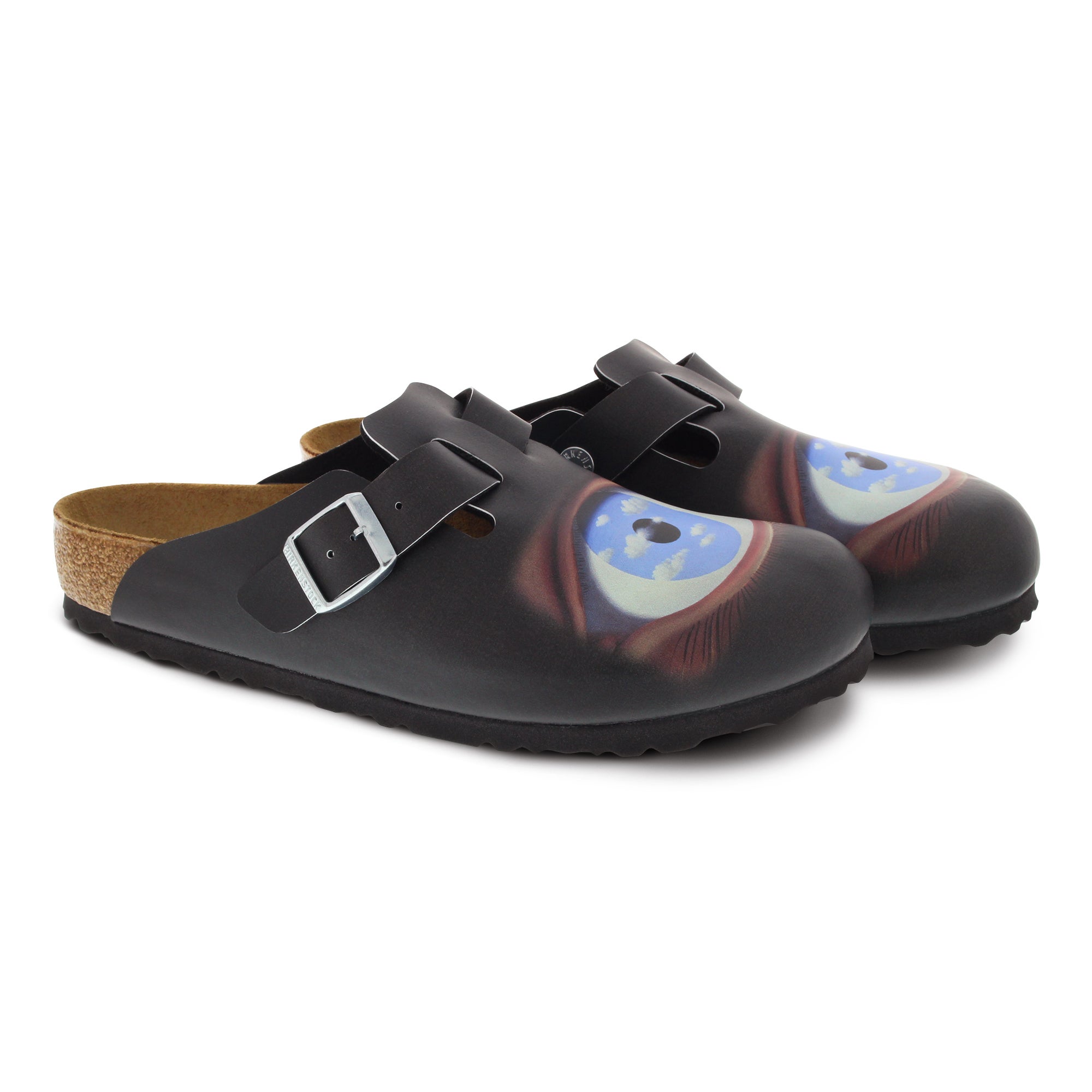 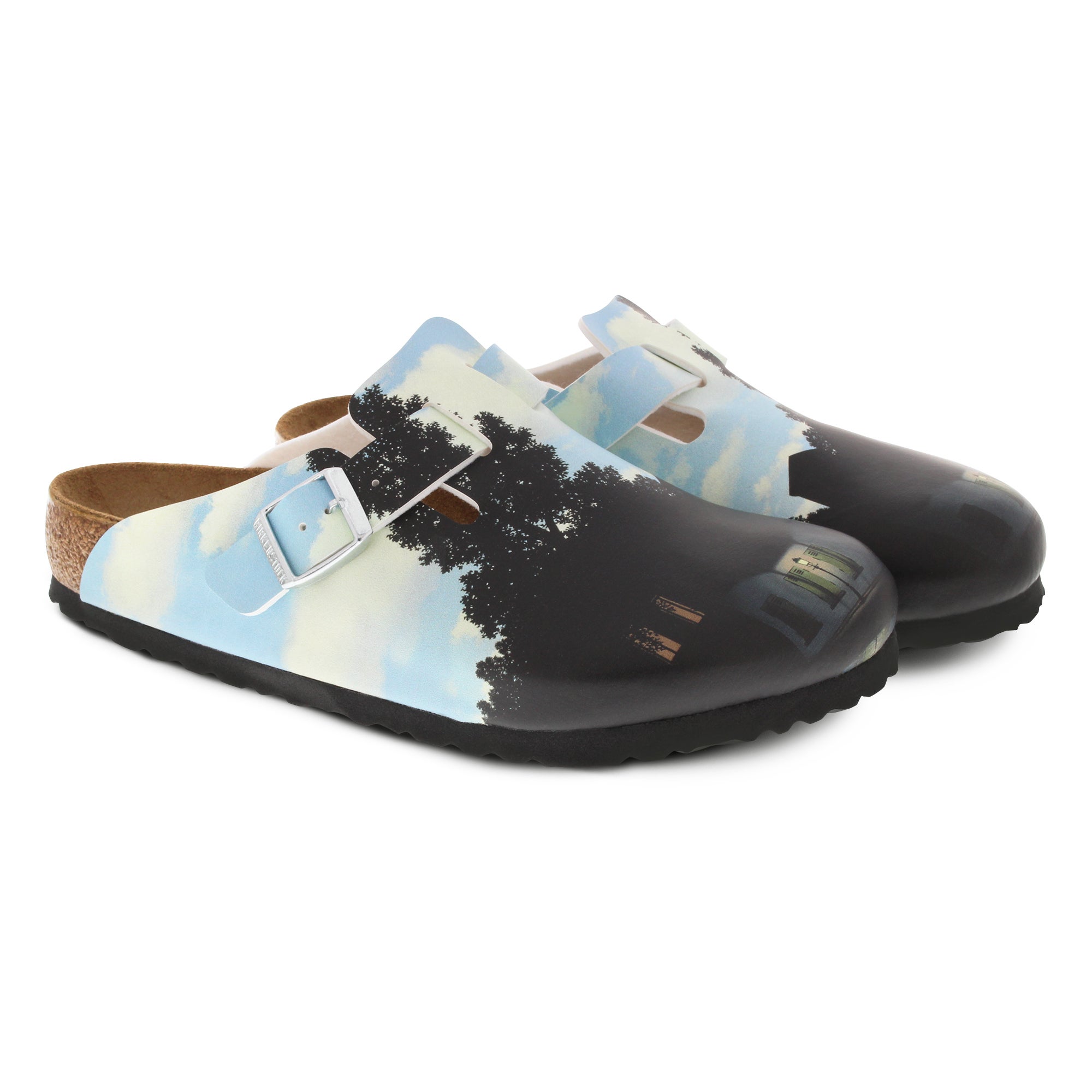 Opening Ceremony x Birkenstock
Boston Magritte House
$180.00
Birkenstock
Amazon
It’s Already Prime Day For These Early Bird Amazon Deals
by Karina Hoshikawa
Fashion
20 Swimsuit Outfit Ideas To Wear Off The Beach
by Brooke Hannel
Deals
The Best Fourth Of July Sales You Can Still Shop
Sure, there are fireworks and flag-waving, but the Fourth of July is also a solid holiday for sorting through the unbelievable deals being offered at the b
by Mercedes Viera
Advertisement
Most Wanted
How To Shop This Year’s Nordstrom’s Anniversary Sale ...
If you’ve clicked yourself to this page, then you’re here for all the need-to-know info on Nordstrom‘s biggest annual event — the Nords
by Karina Hoshikawa
Best Wedding Dresses
Meet The Anti-Wedding Creative Who Styles Bridal Wear For A Living
by Frances Solá-Sant...
Most Wanted
AllSaints’ Golden Hour Collection Is Summer Vibes Incarnate
AllSaints’ style lexicon may bring to mind edgy leather jackets and effortlessly cool denim, and its new Golden Hour collection is bringing the heat
by Karina Hoshikawa
Most Wanted
15 Pool-Style Slides To Slip Your Feet Into
by Emily Ruane
Most Wanted
The Top-Rated Dresses Always On Sale At Nordstrom Rack
by Amanda Randone
Most Wanted
The One Item That R29 Editors Always Bring On Vacation
With the way the world is right now, we’re all craving a little bit of escapism via summer vacation. But sadly, vacation can come with its own kind o
by Mercedes Viera
Fashion
Platforms Are The Season’s Biggest Shoe Trend — 24 To Shop Now
Today’s trends are anything but straightforward, with platforms heels, opera gloves, and micro mini skirts all making waves. Ensuring that your ward
by Frances Solá-Sant...
Designers
“Virgil Abloh: ‘Figures Of Speech’” Exhibit Invites Viewers To “Q...
Question everything: This was the motto of the late fashion designer Virgil Abloh. It was also the thought running through my head as I walked through the
by Irina Grechko
Unbothered
I Didn’t Learn About Black Fashion In My Textbooks
In September 2021, I started my role as the Style and Culture Specialist at Unbothered. Stepping into the role was exciting but also scary. The ideas and s
by Venesa Coger
Advertisement
Advertisement
Discover
R29 Stories & News
Watch
R29 Original Series & Films
Shop
R29's Most Wanted