Skip navigation!
Story from Designers
Photo: Victor VIRGILE/Gamma-Rapho/Getty Images.
Chanel Spring 1993.
Since first entering the fashion lexicon in the 1920s, thanks to Chanel, the skirt suit underwent little change over the years. In fact, it wasn’t until the ‘90s that the two-piece set, long seen as the epitome of ladylike fashion, got its first makeover when Chanel (this time with Karl Lagerfeld at the helm) revitalized the look for the MTV era. For the spring 1993 collection, the designer sent out tweed looks styled with belted chains, fishnets, and leather gloves. At the same time, celebrities like Princess Diana and model Naomi Campbell modernized the style by pairing it with cinched waist belts, over-the-knee socks, and black stockings.
Advertisement
But if the spring 2022 runways are any indication, the skirt suit is now undergoing yet another transformation. This time the makeover is marked by shorter-than-ever-before hemlines and risqué slits that would make ladies who lunch clutch their pearls.
Versace Spring 2022.
This season, contemporary brands took liberties with what has often been considered a conservative style. New York’s Sandy Liang showed a light pink neoprene version with a lopsided hemline, which the recent Target collaborator delightfully paired with sneakers. Meanwhile, Versace offered a black patent leather version, with a mini skirt so short the jacket might as well have been styled as a dress. As if the choice of fabric and cut weren’t daring enough, the look was paired with Bratz-like platforms more suited for a nightclub than a social luncheon. Then, there’s Miu Miu, which showed a lineup of Y2K-era micro-mini, midriff-baring skirts with unfinished hemlines alongside preppy blazers that only the students at Constance Billard would dare to wear past the school entrance.
Miu Miu Spring 2022.
Sandy Liang Spring 2022.
This movement follows other dress code-busting trends that have emerged, like the blazer, which is also undergoing a NSFW transformation of its own. The trend is also in line with the great shrinkage in fashion, where no hemlines are safe from scissors. But whereas the barely-there pieces of fabric disguised as skirts with equally revealing tops (a la Kim Shui) may not be for everyone, the suit offers a more wearable alternative with blazers that cover the arms.
Advertisement
So, where do you wear this trend?
While in the past, the skirt suit might have been a staple of afternoon tea get-togethers and fundraising committee meetings (see: Gilmore Girls’ Emily Gilmore or Sex and the City’s Bunny MacDougal), spring 2022's version can be worn anywhere from a night out to a weekend brunch. For more modern styling, look to designers who showed skirt suits with bralettes and crop tops, a look that's perfect for transforming the mini skirt suit from daywear to night attire. Or a two-piece in a less formal fabric, like neoprene or leather, paired with a casual shoe, like a sneaker or a flat boot, for a Saturday brunch with friends.
No matter where you choose to wear the modern skirt suit, it’s a guarantee it’ll be short and a little inappropriate for office dress codes. But who wants to be there anyway?
shop 8 products 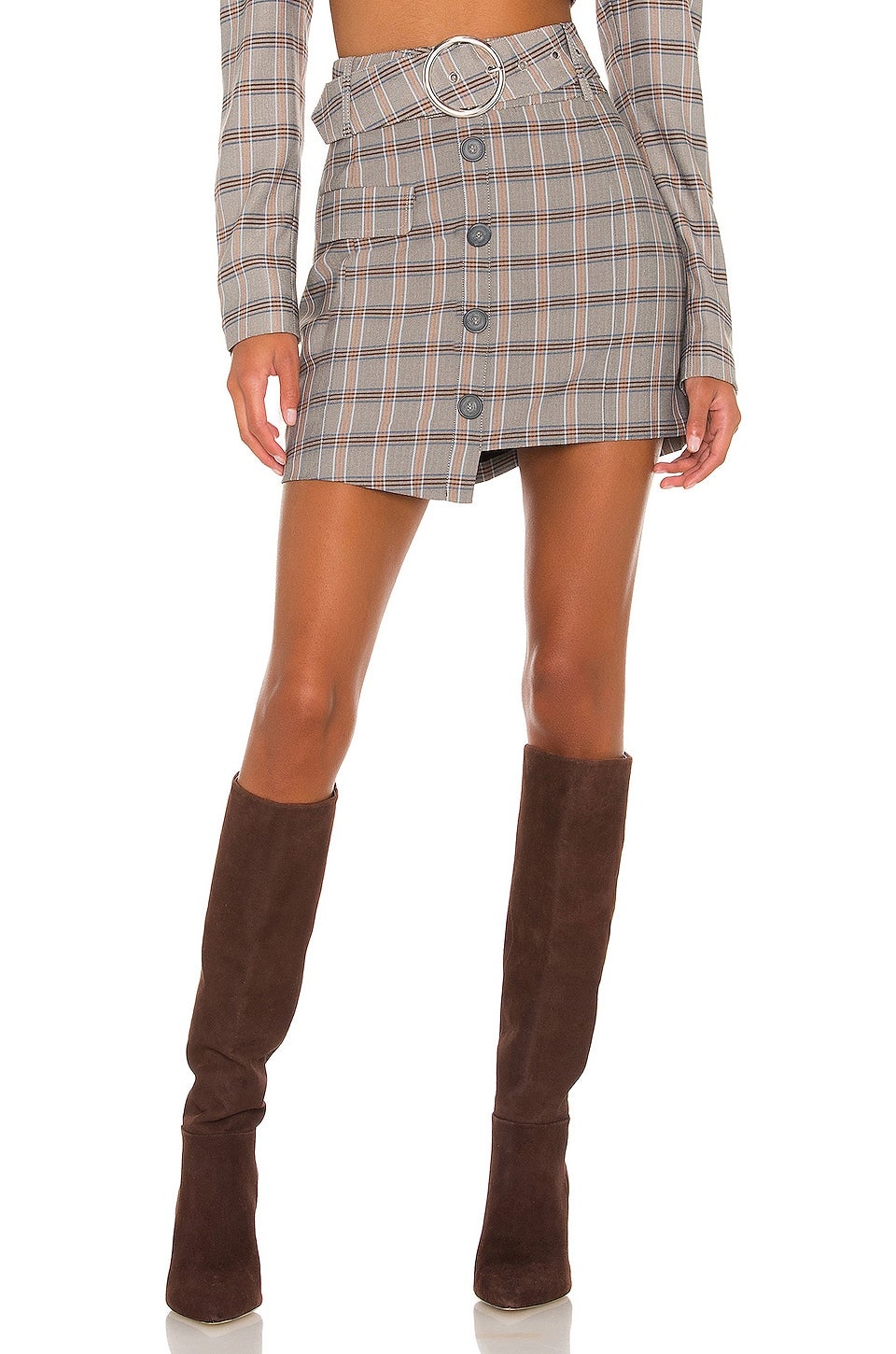 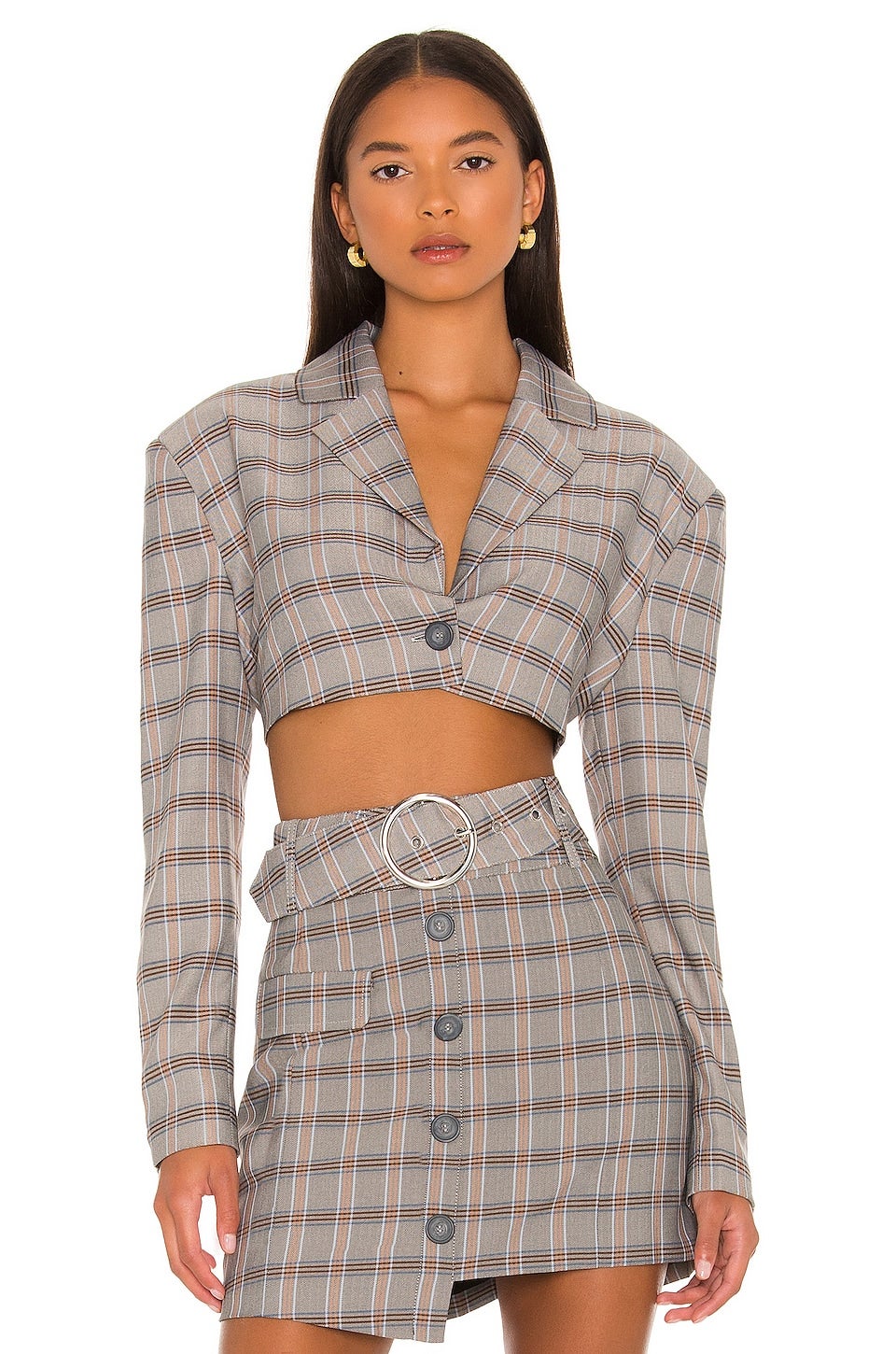 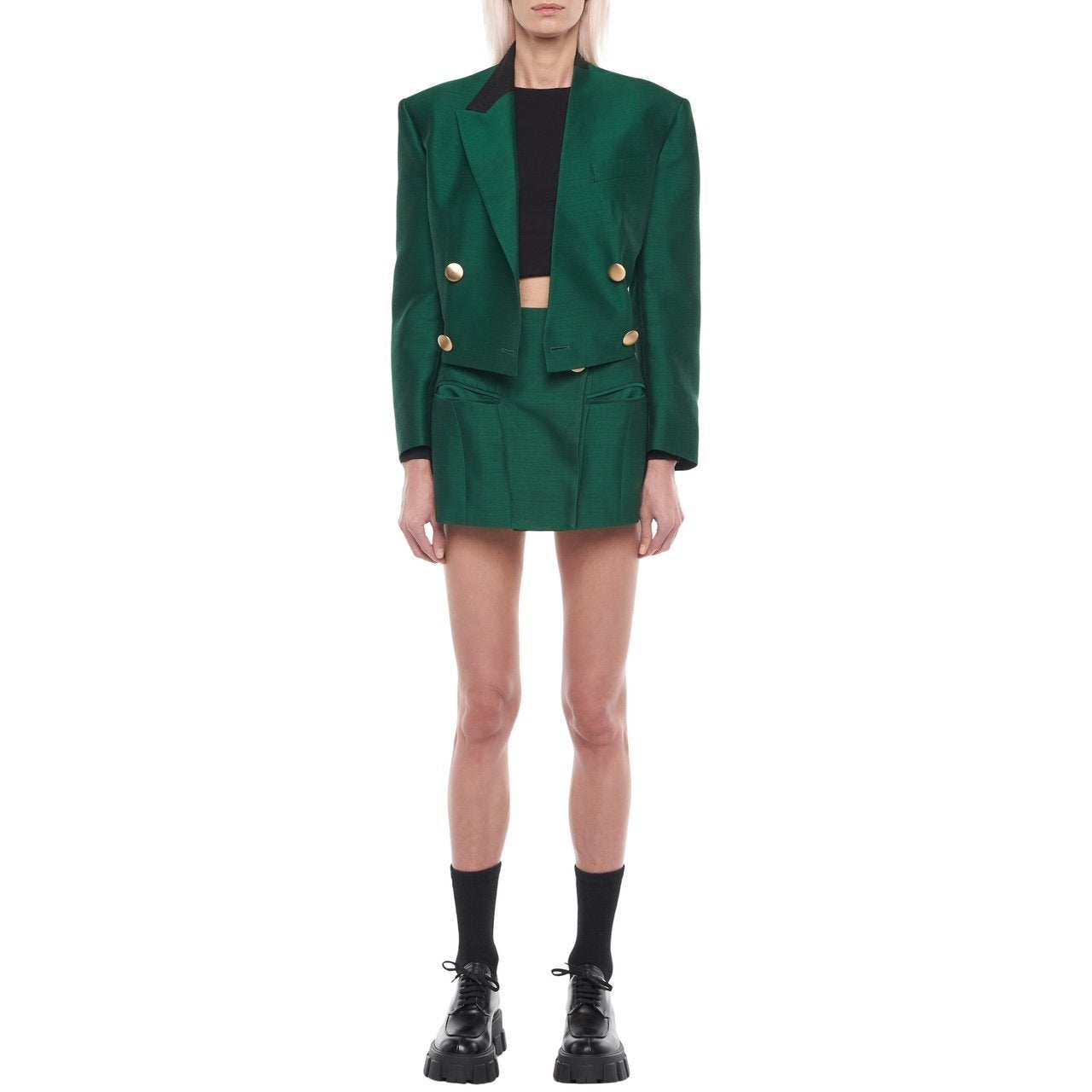 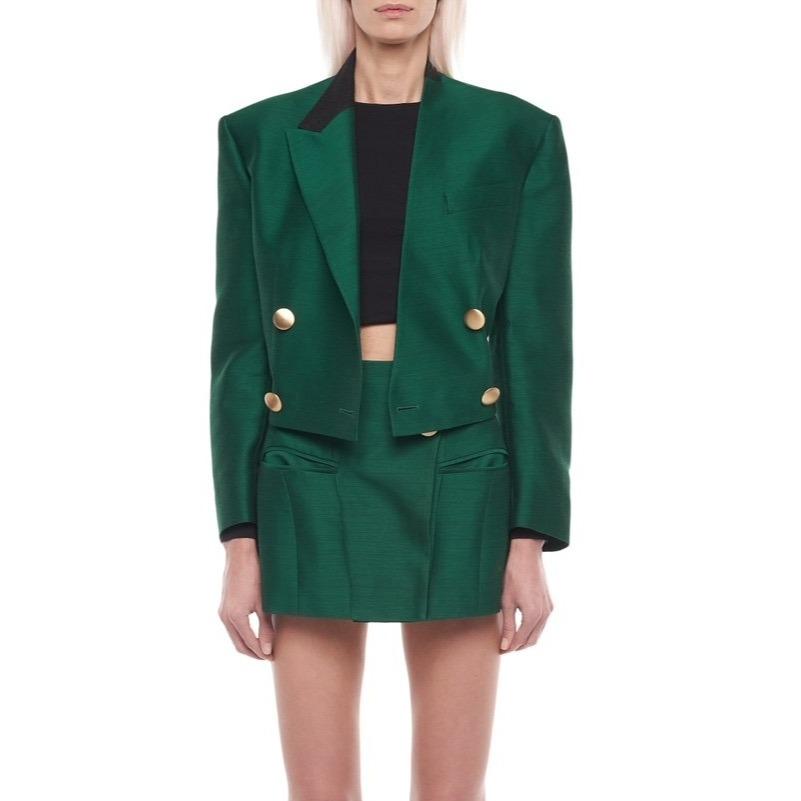 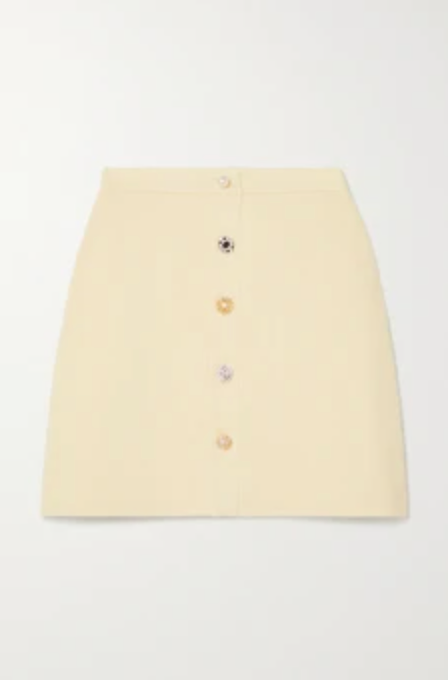 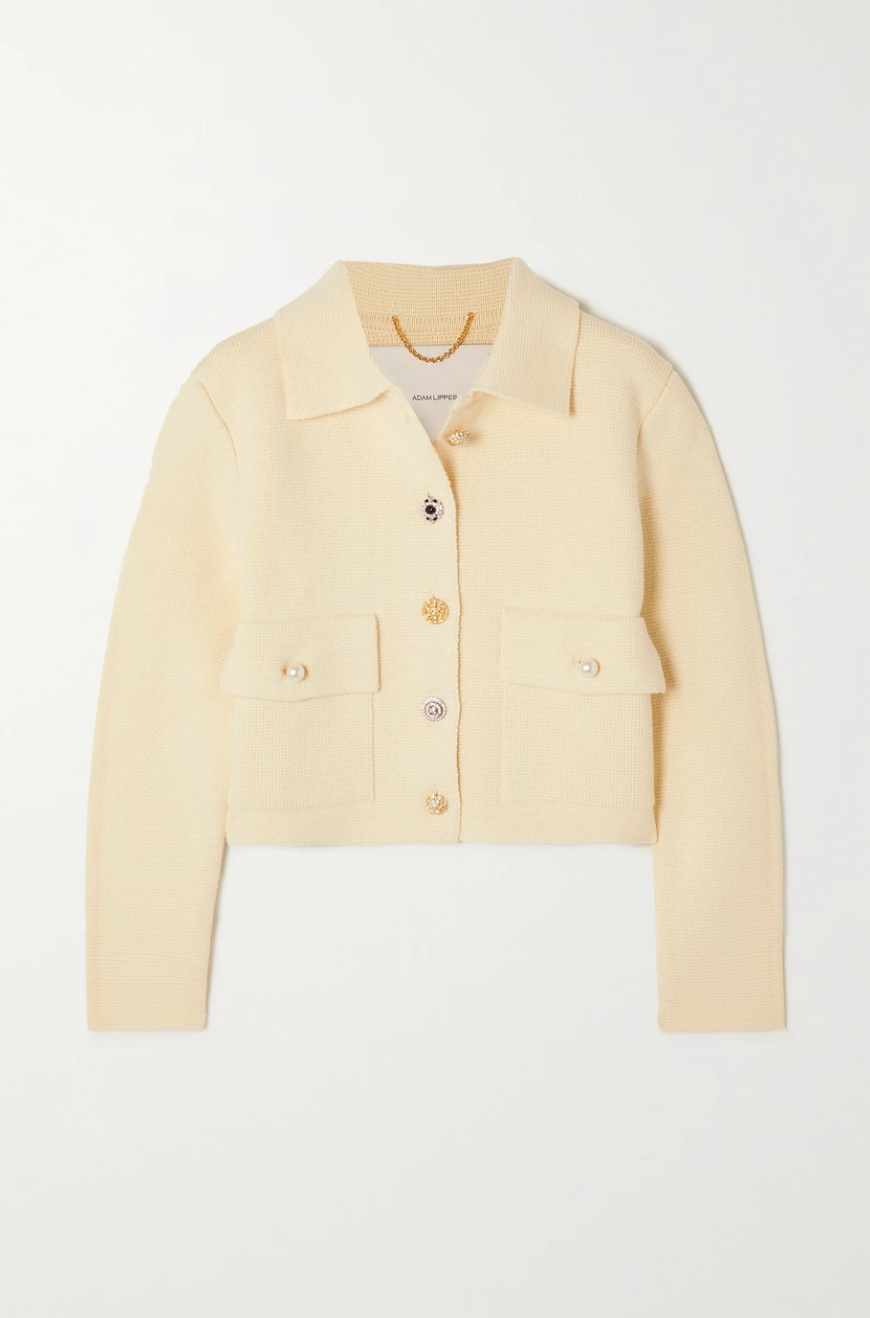 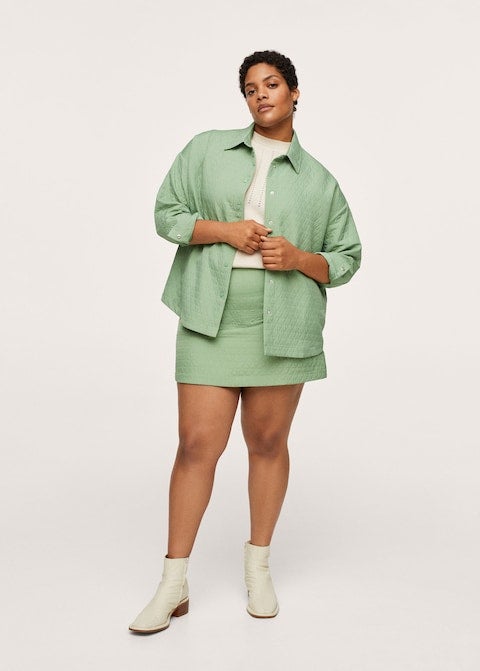 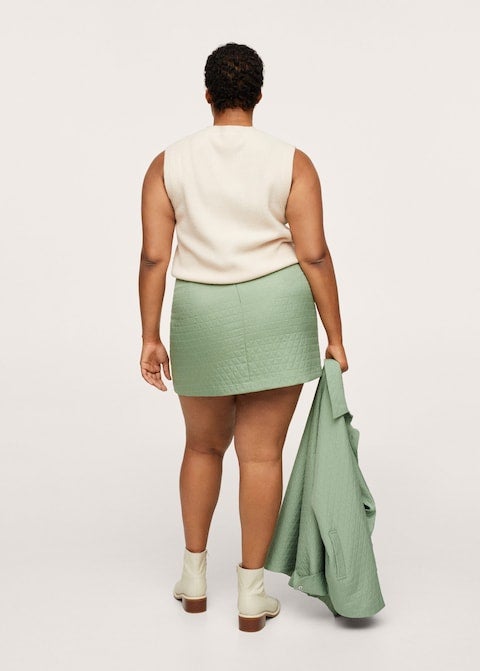 Mango
Textured Miniskirt
$59.99
Mango
Shopping
A Clog-Shopping Guide: The Good, The Rad & The Fugly
by Emily Ruane
Fashion
These Will Be The Biggest Fashion Trends Of 2022 — Shop Them Now
by Laura Lajiness Ka...
Engagement Rings
7 Engagement Ring Trends That Will Be Big In 2022, According to E...
Pairing the notion of a fashion trend with something as long-lasting as an engagement ring can seem counterintuitive — the latter is equated with timeles
by Nicole Kliest
Advertisement
Fashion
Logomania 2.0 Is One Of 2021’s Defining Trends
Earlier this year, Gucci and Balenciaga “hacked” each other’s collections in an attempt to push beyond the boundaries of conventional brand collabora
by Frances Solá-Sant...
Fashion
It’s Party Shoe Season: What Makes A Festive Pair?
Whether you’re making an entrance at a glitzy holiday soirée or dressing up at home just because, the ability to safely toast the season is reason enoug
by Jenn Barthole
Fashion
Move Over Sequin Dress, This Holiday Season It’s All About The Pa...
To most, the December soundtrack of yuletide tunes and jingle bells signals the fast-approaching, snow-dusted end to yet another year. But to anyone who lo
by Amanda Randone
Fashion
Slope Style Is The New Street Style: Why Après Ski Is Trending Th...
Last year, when the first House of Gucci cast photo — featuring Adam Driver and Lady Gaga in ‘80s-style winter outfits — emerged online, it forecaste
by Frances Solá-Sant...
Denim
Welcome Balloon Pants: The Denim Trend That’ll Convince You...
It’s been a difficult year for skinny jeans lovers. In February, TikTok, Gen Z’s go-to platform, declared the It denim trend of the ‘00s “uncool”
by Frances Solá-Sant...
Fashion
From Footpath To Front Row: Why The Hiking Boot Will Be Winter’s ...
After a year-long blur of evolving restrictions coated in copious amounts of hand sanitizer and doom scrolling, one of our main takeaways from 2021 is that
by Amanda Randone
Designers
The ‘90s Skirt Suit Is Back & It’s Shorter Than You Remember
Since first entering the fashion lexicon in the 1920s, thanks to Chanel, the skirt suit underwent little change over the years. In fact, it wasn’t until
by Frances Solá-Sant...
Unbothered
6 Fashion Pieces R29Unbothered Is Loving This Fall
by Venesa Coger
Most Wanted
25 Trench Coats That Prove There Are Many Ways To Rock The Trend
by Alejandra Salazar
Advertisement
Advertisement
Discover
R29 Stories & News
Watch
R29 Original Series & Films
Shop
R29's Most Wanted