Skip navigation!
Story from So, How Is It Really?
Photo: courtesy of Mike's Hard Lemonade Co.
The last time I reached for a Mike’s Hard Lemonade, I had just recently turned 21 and was still in the phase of my life where I wanted my alcohol sweet and easy to drink quickly. As my taste buds matured, I moved on to honey whiskey, then IPAs, and eventually down the deep rabbit hole of handcrafted aperitifs. Now, you’ll catch me making old fashioneds at home and sipping on hard seltzer or tea on Sunday afternoons; Mike’s Hard Lemonade distinctly became a thing of the past.
So when the new Mike’s Hard Lemonade Seltzers came across my desk, I was surprised by the intense nostalgia that seeped through me. I suddenly remembered that carefree 21-year-old energy — the energy of someone who didn’t worry about saving for retirement and thought pandemics only existed in the past. I instantly knew I had to try them — if not for the me of today, then for my past self. So I pulled my editorial teammates together on a Zoom call and, collectively, we tasted and ranked each of the four flavors: lemon, mango, strawberry, and pineapple.
Advertisement
As always, please consume responsibly — both our rankings and your alcohol.
Lemon
We started with the classic lemon flavor, and in the end, most of us liked this one the best. “It tastes like lemonade,” remarked Olivia Harrison, our Lifestyle editor. I agreed with her and added, “It’s what I want lemonade to taste like, bubbly, sour, and less sweet than the actual thing.” Clocking in at 5% ABV, 100 calories, and 1 gram of sugar, the lemon flavor checked all my boxes when it came to hard seltzer: light, refreshing flavor; not too sweet or full of sugar; and a low enough ABV to not feel the effects the next day. A few of my co-workers thought it had a strong aftertaste, but the general consensus was that if we were handed this at a party we would definitely drink it, and a six-pack would be a great addition to a beach outing. One of my co-workers, who famously hates White Claw, said she would much rather have a Lemon Mike’s Hard Seltzer than any other hard seltzer. I also mixed this one with vodka and it tasted exactly like a lemon drop. Admittedly, this was in a very dangerous “doesn’t really taste alcoholic” way, so do with that information what you will.
Strawberry
I personally love this one and think it smells and tastes like a strawberry-flavored Juicy Juice. But, a few of my coworkers didn’t like the smell. One claimed it smelled like medicine, but I pointed out it isn’t a wine — it’s not supposed to have a nose. We debated back and forth about whether this one was more or less sweet than the others, and landed somewhere in the middle, which eventually led to us ranking it in second place. Olivia said she would choose it over a White Claw and really liked that the can was black. (She’s right, the aesthetic is cool as hell). Molly Longman, our Wellness writer, described it best, “I would definitely drink this if I was in the mood for something fruity, it’s like less intense Kool-aid and alcohol.”
Advertisement
Mango
I knew I wasn’t going to love this one because I don’t like mango (I know, I’m a pariah), but it still took the bronze because our Senior News Editor, Leora Yashari, liked it so much. “I love mango-flavored things and this tastes very much like mango,” Leora explained. Notably the least sweet of the bunch, Molly said this one tasted like “making bad decisions in a basement,” which truly feels like the greatest description of any alcoholic drink ever.
Pineapple
Everyone loved the way this one smelled, but in terms of taste it was ranked last of the four flavors. “It’s just too sweet,” multiple people said. Those of us who particularly love hard seltzer decided we would definitely drink it at a party, but wouldn’t buy a pineapple-only six-pack. I could totally see mixing rum with this and making a piña colada, or simply drinking it as a lower ABV piña colada alternative, but I do think it’s a bit too sweet to be a staple in my fridge. 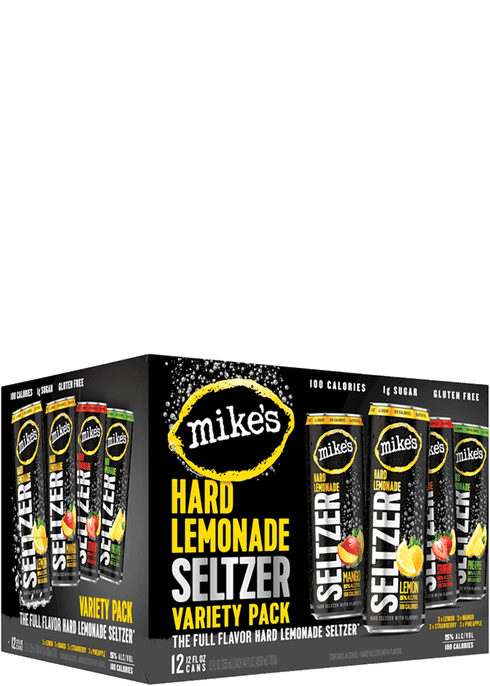 MIKE'S
Hard Lemonade Seltzer
$15.99
Total Wine
At Refinery29, we’re here to help you navigate this overwhelming world of stuff. All of our market picks are independently selected and curated by the editorial team, but if you buy something we link to on our site, Refinery29 may earn commission.
Food & Drinks
I Tried America’s First Gluten-Free Superfood Bagel & It Wa...
I could go my whole life without seeing the adjective “healthy” describe a bagel. Same goes for “superfood,” “gluten-free,
by Alexandra Polk
Most Wanted
Only Martha Stewart Could Make A Meal Kit Taste This Gourmet
If I could invite anyone to a dinner party at my house, the first invites would go out to Post Malone, Ken Jennings, and Martha Stewart. Not to brag, but I
by Karina Hoshikawa
Food & Drinks
7 Hot Sauces Worth Sweating Over — According To Spicy Reviews
by Alexandra Polk
Advertisement
Somos Latinx
I Almost Choked On My Agua Fresca When I Learned About Spa Water
From Mexican restaurants to elote stands to summertime carne asadas, many of us grew up sipping agua frescas. The refreshing Mexican staple, made by blendi
by Elsa Cavazos
Beauty
These Premade Smoothies Kept Me Full Till Lunch — & Might Make Me...
During these lazy, hazy days of summer when I can’t so much cook anything or think of eating anything that requires heat to make, I often dream of ho
by Jinnie Lee
Food & Drinks
Banish Classic Coffee Jitters With An Adaptogenic Latte That Brew...
Few things beat a morning cold brew, but that caffeine jolt can have its downsides. Sweating, jitters, shaky hands, and anxiety are just a few of the sympt
by Alexandra Polk
Gift Guides
But First, Coffee: 22 Gift Ideas For Bean-Loving Buds
by Cortne Bonilla
Best Coffee
A Monthly Subscription That’s Coffee Snob Approved
Kate Spencer here, Most Wanted strategist and resident coffee enthusiast. I consider a quality cup of joe to be one of life’s simplest pleasures, so
by Kate Spencer
Most Wanted
There’s No Need For A Blender With This Smoothie Subscripti...
If you haven’t heard about Kencko, I’m honored to introduce you to my new favorite blender-less smoothie subscription service. You read that ri
by Mercedes Viera
Most Wanted
Clink, Clink: We Found The Best Drinking Glasses For Spring
Whether you’re a mocktail mixer who only sips inside with the AC blasting or a wine enthusiast who pairs every bottle with an al-fresco breeze, the n
by Alexandra Polk
Food & Drinks
Hot Sauce Enthusiasts: Get To Know The “Freaky Flavors̶...
The hot sauce folks who get it, get it. NPR reported back in 2012 that people who love the spicy sauce tend to be more adventurous and thrill-seeking, and
by Jinnie Lee
Food & Drinks
This Plant-Based Meal Delivery Service Taught Me To Love Veggies
I always think of April — a.k.a. the month that ushers in “spring cleaning” as a means to start anew — to be an opportune time to reassess,
by Jinnie Lee
Advertisement
Advertisement
Discover
R29 Stories & News
Watch
R29 Original Series & Films
Shop
R29's Most Wanted