Skip navigation!
Story from Celebrity Style
Photo: Jon Kopaloff/FilmMagic.
It was a regular  Monday morning when Dani Vee, a self-proclaimed “traveler, donut enthusiast, dog mom, aunty, and baker,” unexpectedly ran into her hero: Phoebe Waller-Bridge. Even better? The entire encounter occurred while Vee was wearing a T-shirt printed with said hero’s face on it.
“They say ‘never meet your heroes.’ F&CK THAT. You should DEFINITELY 100% meet them,” Vee wrote in a caption alongside a slideshow of selfies of the two together, one of which shows Waller-Bridge posing with the T-shirt in the most Fleabag way possible — breaking the fourth wall. In the other, Vee is seen soft-smiling (perhaps to stop herself from screaming out in excitement) with Waller-Bridge’s arm casually strewn over her shoulder.
Advertisement
The encounter happened during a particularly high time for the writer, director, and actress, who recently won two Emmys, a Critics Choice Award, a SAG Award, and a Golden Globe — all for her work on the BBC comedy-drama Fleabag, which she wrote, directed, and starred in. In case you’re wondering, we stan her, too.

They say ‘never meet your heroes.’ F&CK THAT. You should DEFINITELY 100% meet them. Or when you’re traveling just embarrassingly bump into them whilst wearing their face on your shirt. #phoebewallerbridge could not be more friendly, hilarious, kind, generous, and incredibly down-to-earth. We laughed, chatted, and she allowed me to gush over fellow genius @taikawaititi She’s just awesome. Go forth and watch #fleabag 💜💜💜💜💜 #hero #idol #feminism #bbc #amazonprime #hotpriest #comedy

“#Phoebewallerbridge could not be more friendly, hilarious, kind, generous, and incredibly down-to-earth,” she continued. “We laughed, chatted, and she allowed me to gush over fellow genius @taikawaititi,” the writer responsible for Jo Jo Rabbit. Vee ended the caption matter-of-factly: “She’s just awesome.”
Naturally, we went on a hunt to find the exact T-shirt worn by Dani Vee in the photo, sadly, to no avail. On the bright side, we did find a whole slew of worthy alternatives. Check them out, wear one, and maybe, just maybe, you too will have a chance run-in with the one and only Phoebe Waller-Bridge. 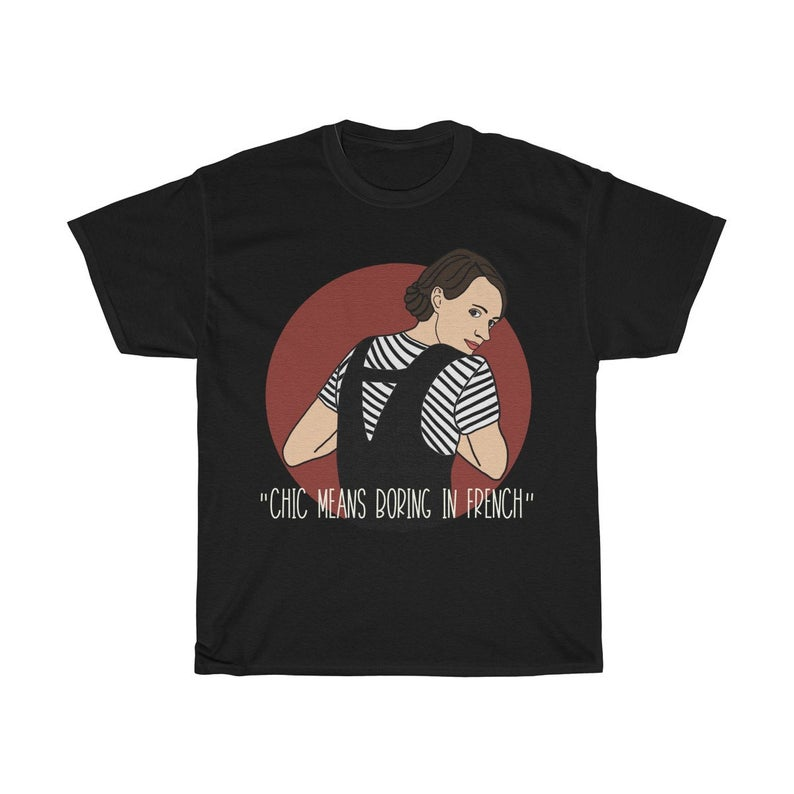 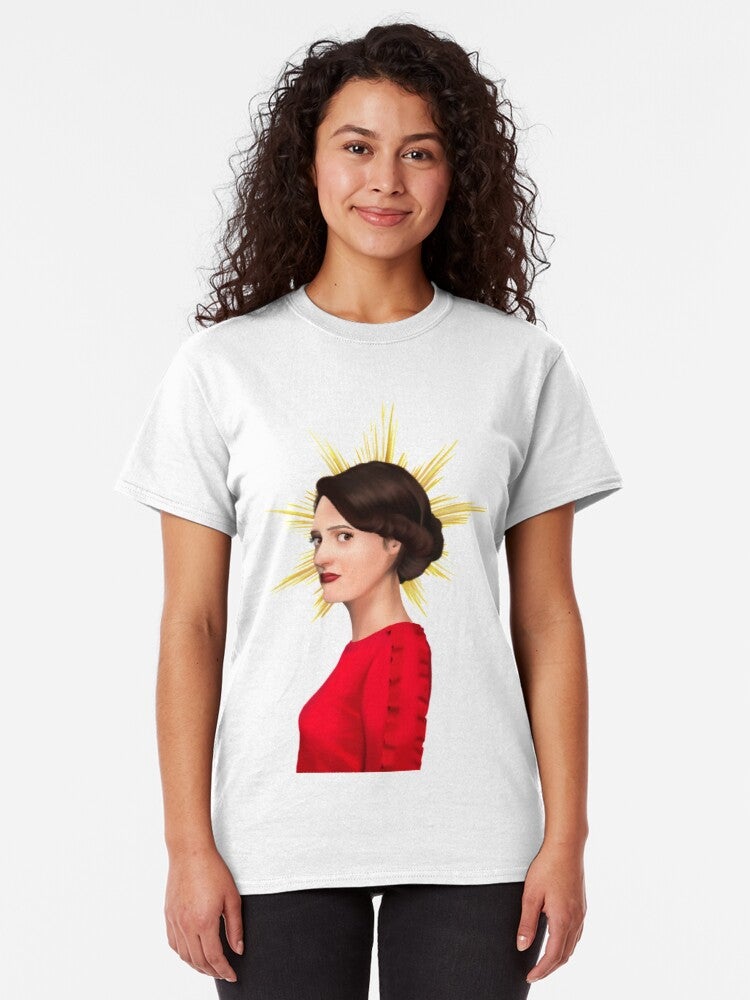 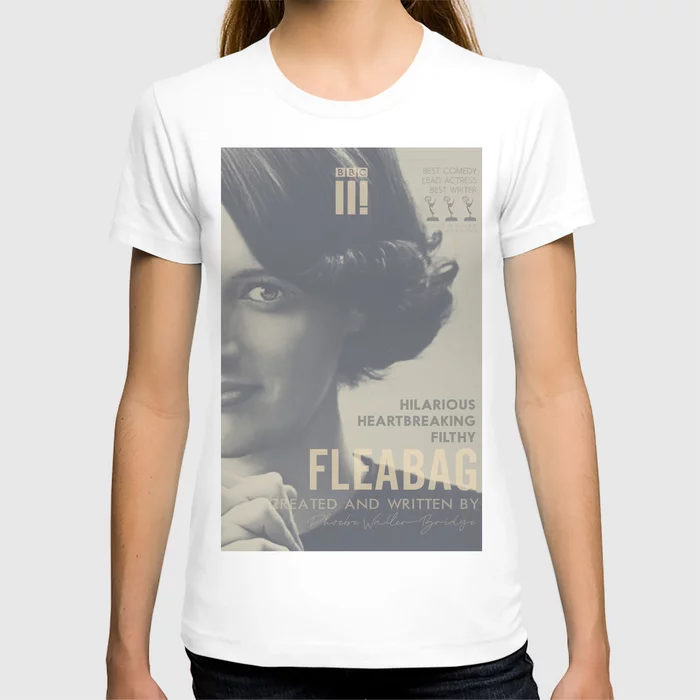 Style
Here’s What Your Favorite Celebrities Wore During Memorial ...
by Eliza Huber
Style
7 Meghan Markle-Approved Fashion Brands That Are Also Affordable
by Eliza Huber
Style
Olsen Twin Sets The Bar For Social Distancing Style
From their pastel-colored lenses and bandanas circa 2000 to the black shapeless frocks they’re known for today, the Olsen twins have been our style icons
by Eliza Huber
Style
Meghan Markle’s Go-To Dress Is 50% Off At Nordstrom
We’ve learned every TikTok dance, box-dyed our hair pastel pink, and watched all 12 episodes of Normal People — twice. Next on our list of distractions
by Eliza Huber
Fashion
Villanelle Is A Carrie Bradshaw For Our Disillusioned Generation
Sex and the City’s Carrie Bradshaw walked so Killing Eve’s Villanelle could run. Sure, Bradshaw can be considered a predecessor to many of TV’s antih
by Cait Munro
Style
Meghan Markle Just Gave This ‘90s Jewelry Trend Her Stamp Of Appr...
Summer is almost here, and with it, comes all of our favorite kitschy, nostalgic accessory trends: seashell jewelry, fruit-shaped handbags, rhinestone-crus
by Eliza Huber
Style
Here’s What You Would’ve Seen On The Met Gala Red Carpet Last Night
by Eliza Huber
Celebrity Style
Meghan Markle’s Baseball Cap Marks The Beginning Of A New Era
It’s only been a month since Meghan Markle and Prince Harry swapped out their Sussex digs for a house in the Hollywood Hills, but they already look like
by Eliza Huber
Style
Pillows For Spring: Groundbreaking
If you, like us, have been receiving near-constant reminders from your phones that screen time is at an all-time high, you’ve probably already caught a g
by Eliza Huber
Celebrity Style
Meghan Markle’s Go-To Pumps Are 50% Off
If we had to guess the last thing on your mind right now, we would likely say high heels. After all, when your days consist of traveling from your bed to t
by Eliza Huber
Fashion
Rihanna’s New Fenty Capsule Collection Is Full Of Power, Strength...
Bad news: the wait for Rihanna’s next album continues. But, Riri is dropping some other new stuff while we’re under quarantine. On Instagram, she revea
by Alexis Reliford
Celebrity Style
We Can’t Stop Thinking About Julia Garner’s Wedding P...
With the global pandemic causing the majority of the fashion industry to hit pause, it’s hard to imagine what trends will look like in the seasons to com
by Eliza Huber
Discover
R29 Stories & News
Watch
R29 Original Series & Films
Shop
R29's Most Wanted