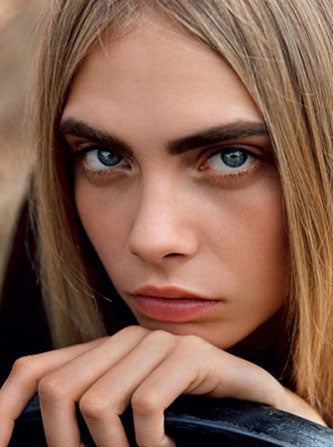 Photo: via @caradelevingne.
UPDATE: Check out Cara Delevingne's IMDB profile and tell us if you spot anything interesting. Okay, we'll just do it for ya: the Amanda Knox movie is apart of her listed filmography. Assuming the role of Amanda Knox's sister, Deanna, in The Face of an Angel will replace whatever plans Delevingne had for the Victoria's Secret Fashion Show. While the director hasn't come right out and announced it, an IMDB credit is pretty major. A source told Metro.UK "acting is where her heart really lies and she wants to prioritize that over modeling." Delevingne will star alongside Kate Beckinsale — not too bad for one of her first major films, eh? (Metro.UK)
Advertisement
October 10th, 2013: No, your eyes aren't deceiving you; Cara Delevingne is literally everywhere right now. Well, she hasn't really ever "left" per se, but she's still the model of the moment. Whatever it is she's doing, she's doing it right. So right, in fact, she's quickly becoming a movie muse.
A dreadlocked Delevingne popped up on make-up artist Sian Richards' Twitter last week announcing her role in the film adaptation of London Fields. News broke today that the model-slash-actress will likely star in yet another murder mystery after Fields finishes filming next month.
Michael Winterbottom's screen adaptation of the Amanda Knox saga, The Face of an Angel, is rumored to have Delevingne on the playbill. The story follows the life of Knox, from college student to murder suspect. Daniel Brühl is slated to play the lead, and Colin Firth's name is also floating around. London's Mirror broke the news, though the film's producers have not officially confirmed it. The jury's out on who Delevingne will play, but it likely won't be Knox, says the Mirror. Still, with a cameo in Anna Karenina and a supporting role in 2014's Kids in Love under her belt, Delevingne may be poised for a significant role. (The Telegraph)
Entertainment
The Fallout Isn’t Just About Another School Shooting
The Fallout only needs five minutes to completely break you. In the last heart-wrenching moments of the movie, out on HBO Max on January 27, Vada, played w
by Katherine Singh
Unbothered
Love & Hip Hop Gets Rooted In A New Special About African ...
Since its series premiere in 2011, VH1 original reality series Love and Hip Hop has taken music fans all over the country, making stops in New York City, M
by Ineye Komonibo
Unbothered
Millennials, Have We Aged Out Of The High School Genre?
Five years after the series finale of Degrassi: Next Class — the fifth iteration of the popular Canadian teen franchise — HBO Max announced that it wou
by Ineye Komonibo
Advertisement
Entertainment
She Created Her Own Korean Disney Princess Musical & This Needs T...
When most people think of an Asian Disney princess, there’s often one go-to: Mulan aka the Chinese heroine who doesn’t need saving but instead save
by Katherine Singh
Entertainment
How Scammers Became Accidental Antiheroes Of The Girlboss Era
Con artists are nothing new. But our collective interest in them has been piqued in recent years as a number of high-profile scandals have redefined the wa
by Alice Porter
Dedicated Feature
Single Drunk Female — A Must-See Comedy About Sobriety —...
Margarita Mondays. Wine Wednesdays. Happy hours. “Book club.” In a world in which drinking culture is the norm, with holidays (St. Patrick’s Day, New
by Andrea Cheng
Unbothered
In Defense Of Ari Lennox’s Trip to Ghana: The Power and Pro...
Grammy-nominated musician Ari Lennox recently performed at Ghana’s Afrochella music festival and shared her experience in the West African nation on Twit
by Qali Id
Somos Latinx
How Afrobeats Is Musically Bridging Black Latinxs and Africans
The first time I heard Colombian pop singer Maluma’s “Mama Tetema,” featuring Tanzanian singer-songwriter Rayvanny, I was writing a script for VEVO?
by Marjua Estevez
Unbothered
Netflix Has A Hit On Its Hands With The New Cast Of Too Hot To...
Spoilers for Netflix’s Too Hot to Handle ahead. Too Hot to Handle came to us at the beginning of the coronavirus pandemic. It was gloriously-timed conten
by Ineye Komonibo
Unbothered
And Just Like That… Sex and the City Still Doesn’t D...
Sex and the City is such a pop-culture juggernaut that many Black women can make some reference to it, whether it be a love of the Cosmopolitan, a salute t
by Niki McGloster
Unbothered
Still Missing Insecure? These New Black Shows Will Make It...
by Ineye Komonibo
Unbothered
It’s Time For Black TikTok Creators To Be Paid Their Worth
Forbes recently named TikTok’s top-earning creators, including Charlie and Dixie D’Amelio and Addison Rae.
by Venesa Coger
Advertisement
Advertisement
Discover
R29 Stories & News
Watch
R29 Original Series & Films
Shop
R29's Most Wanted