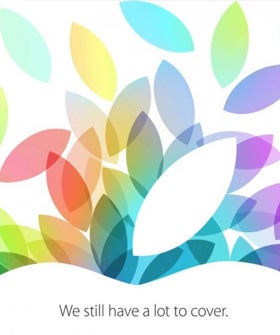 As we noted a couple weeks back, Apple is revving up for an event tomorrow that will reportedly revolve around some shiny, new iPad models. Both Bloomberg and the
The Wall Street Journal cite sources within the company who say that Apple CEO Tim Cook will unveil a new iPad Mini with Retina Display and a thinner full-size iPad Tuesday in San Francisco. If successful, the two prospective tablets could help reinvigorate Apple's growth. Even though the iPad is Apple's second best selling product after the iPhone, it still has still dominated the market. The company's tablet market share shrank to 32% during the second quarter this year. It faces continuing competition from manufacturers, including Samsung, Lenovo, and Acer, which offer lower-priced tablets.

Apple declined to comment ahead of the event to both Bloomberg and the Journal. But, we're not expecting too many surprises. Check back with us tomorrow for coverage of the event. (Bloomberg)
Living
Today Was The Day Bernie Sanders Became President — Of Memes
Things certainly feel momentous today. After four long and grueling years of having Donald Trump as president, so many Americans can’t help but feel like
by Michelle Santiago...
Tech
Why Is This Old Photo Of Lady Gaga & Joe Biden Now A Meme?
We’re just hours away from the inauguration, and while the air is heavy with concern about potential violence from the far-right, the internet is crawlin
by Michelle Santiago...
Tech
Facebook & Twitter Are Finally Banning Trump — Now That He’...
Update: Twitter officially announced Friday evening that President Donald Trump’s account has been permanently suspended. “After close review
by Olivia Harrison
Tech
The Insurrection Will Be Memed — & Maybe That’s Not A Bad Thing
We’re used to thinking of the internet as neutral territory — a virtual town square where everyone gathers together to process things collectively. It?
by Michelle Santiago...
Tech
Find & Support Black-Owned Businesses With These Apps & Websites
by Olivia Harrison
Tech
The Best (& Most Important) Memes Of 2020
by Michelle Santiago...
Gift Guides
7 iPhone Accessories To Give Your Most Tech-Savvy Friend
by Hannah Rimm
Most Wanted
These Are The Cutest (Functional) Cases For Your AirPods
by Anabel Pasarow
Tech
Inject It Into My Veins: Why I’m Obsessed With Watching Nur...
This year has brought with it a lot of amazing internet content — a good thing considering most of us have had to live our lives entirely online. In 2020
by Olivia Harrison
Gift Guides
9 Gift Cards To Make You Feel Close Even From Six Feet Apart
by Hannah Rimm
Tech
The Secret Shame Of Spotify Wrapped
Once again we have arrived at my least favorite time of year. No, I’m not referring to holiday shopping season or even the fact that the sun now sets
by Olivia Harrison
Cyber Monday
Apple Deals On Everything From AirPods To iPads & MacBooks
by Alexandra Polk
Discover
R29 Stories & News
Watch
R29 Original Series & Films
Shop
R29's Most Wanted