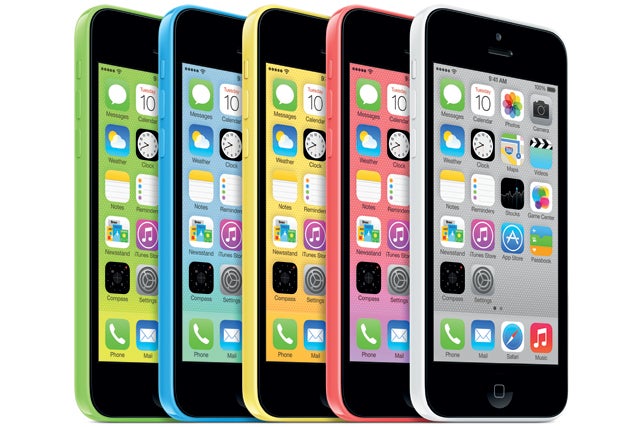 Photo: Courtesy of Apple.
The iPhone 5C may be cheaper than its gilded 5S counterpart, but that doesn't make it more popular. The Wall Street Journal reports that Apple has told two of its assemblers in Taiwan that it will scale back its iPhone 5C orders this quarter. The report, if true, suggests that the lower-priced phone hasn't been as popular with consumers as the company expected. People familiar with the situation told the Journal that one assembler's order would be cut by roughly 20 percent, and another's by about 30 percent. A component supplier, meanwhile, was told to scale back production by 50 percent. For a company that sells millions of phones, those are hardly insignificant numbers.
This doesn't come as a much of a surprise, however. Retailers, including Walmart and Best Buy, have been cutting prices on the 5S to $50 or less. AllThingsD reported this week that the 5S is outselling the 5C two-to-one. Apple itself hasn't released any specific sales figures, but it did announce that it had sold a combined total of nine million new phones over its launch weekend. (WSJ)
Advertisement
Tech
After All Those Bloomberg Memes, Instagram Is Changing Its Sponco...
Earlier this week, Instagram was awash with screenshots of Democratic presidential candidate Mike Bloomberg asking the platform’s most popular meme a
by Anabel Pasarow
Tech
The Best President’s Day Deals On Tech & Gadgets
by Anabel Pasarow
Tech
Valentines Day Memes For Every Stage – From Crushing To Heartbroken
by Michelle Santiago...
Tech
Send Memes: How The Internet’s Favorite Medium Is Keeping C...
When Cait K., a 26-year-old freelance writer and content marketer, was living apart from her partner, Ryan, for almost two years while he attended law scho
by Cait Munro
Instagram
All The Heart-Themed Instagram Filters You Need This Valentine...
by Anabel Pasarow
Tech
Mike Bloomberg Is Paying Your Favorite Meme Accounts To Post Abou...
“Can you post a viral image of me to your account?“ is the new, “paint me like one of your French girls.”  You might’ve seen Democratic pres
by Michelle Santiago...
Tech
“Sksksk” & VSCO Girl Are Officially Words In The Dictionary
“OK boomer,” for those uninitiated, is a term “used, often in a humorous or ironic manner, to call out or dismiss out-of-touch or close-m
by Anabel Pasarow
Online Dating
I Met My Boyfriend On TikTok — & Other Stories Of Online Love
Stephen Hawking once said that we are all connected by the internet, like neurons in a giant brain. With this, I concur — and would even posture that thi
by Anabel Pasarow
Tech
If Your Broom Could Stand Up Yesterday, It Probably Can Today Too
The time has finally come to swipe through the emoji keyboard and pull out the broom emoji. Yet another challenge has taken hold of the internet — one mo
by Michelle Santiago...
Tech
20 Old Computer Games You Completely Forgot About
by Madeline Buxton
Oscars
Oscars 2020: How To Watch & Stream Hollywood’s Biggest Night
Tonight, Hollywood stars from the year’s biggest films will descend on the Dolby Theatre in Los Angeles, CA, for the 92nd annual Academy Awards. Ther
by Anabel Pasarow
2020 Election
How To Watch Tonight’s Democratic Debate
After a chaotic week in Iowa, the seven remaining Democratic candidates will take the stage tonight at St. Anselm College in Manchester, NH, for the last d
by Anabel Pasarow
Discover
R29 Stories & News
Watch
R29 Original Series & Films
Shop
R29's Most Wanted