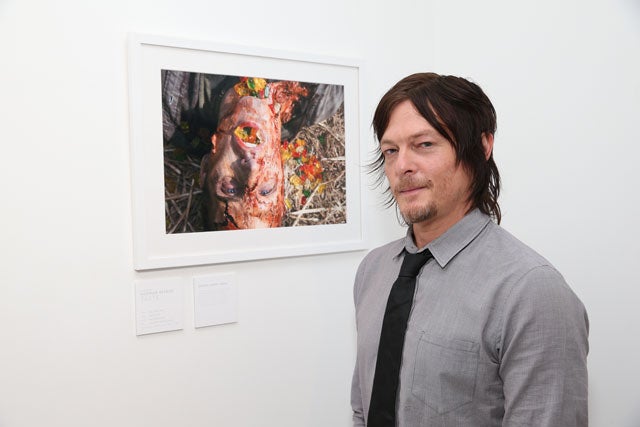 Photo: Courtesy of Canon
It doesn't happen a lot — R29 editors are the example of professionalism — but every now and then, it is possible for a reporter to turn into a gulping, sweating fangirl and just be in awe of a Totally Cool Famous Person from a very good show.
The problem with meeting Norman Reedus is that he is very hard to separate from his character: The incredibly composed, fan-favorite Daryl Dixon of Walking Dead. Sure, Reedus doesn't have a crossbow or even a Southern accent, but the tough demeanor, wry sense of humor, and secret gentility (that last one, we admit, is kind of a guess) of Daryl seems pulled straight from the actor. Which makes sense, because the character has no comic book counterpart, which means that there is plenty of space for Reedus to shine through.
Advertisement
For a recent photography exhibition showcasing Canon's new PIXMA PRO printer series, Reedus (who is pretty competent shooter of not just zombies, but photos, too) got a chance to display some of his work. Though fellow photogs were tasked to evoke the city — specifically the color and vivacity of Coney Island — Reedus took a rather, erm, darker approach. (Note: His photos are rife with spoilers, for anyone who hasn't quite finished Season Three, and demonstrate his very Daryl-like penchant for gore.)
Norman, you were everything we hoped, rendering us a trembling pile of excitement with your manly charm and ability to carry a conversation. Not only are you a talented photographer, but you are a cat man with great hair. Please forgive us for all the drool.

We know you’re a photographer. Did you take this opportunity to take horrifying pictures and shock us all?

“I must be desensitized to everything because it didn’t look that horrifying to me. This opportunity presented itself to me, and since I like a good challenge, I wanted to see what this camera and printer could do. I got to work with all these different types of paper. I’m a big fan of having a print in your hand, framing it, and hanging it on the wall.”

Did you go to Coney Island?

“I didn’t. I went to Governor’s Island, and I shot a part of it in the city and in Georgia. But the one photo with the bird looking out at the Statue of Liberty reminded me of being at the top of the Cyclone before plummeting to your death. That carcass photo, too, is like all the chicken wing bones you see scattered around Coney Island.”

Are you using the Canon camera for the book?

“I have used Canon cameras, yes.”

Are you using cat photos to your advantage? There’s no better way to get likes and fans on the Internet than using cats.

“Ah, well I don’t use my cat to do that. The whole social media thing has become a tool. Every single thing I do, I’m asked to post every move of it. All of that started when Sony asked me to start tweeting, and it snowballed into all these other things. I see that fat cat in front of me every day, and it’s too adorable to not Instagram.”

How old is your cat?

“Oh, up there in years. My son asked me for a black cat when he was five, and he’s 13 now. I don’t know what that is in cat-years, but he’s been with me a long time. He travels with me like a dog.”

“My mother took me to a Laurie Anderson concert when I was little. She came out on stage with this neon glow-in-the-dark outfit, and her face popped up on the screen behind her for the song 'Sharkey’s Day,' which says, 'The sun’s coming up / Like a big bald head.' It always stuck in my mind. I mean, I was terrified at the time ‘cause I was small. I have a book of photography coming out called The Sun’s Coming Out Like A Big Bald Head, and Laurie saw the images, and approved the title.” 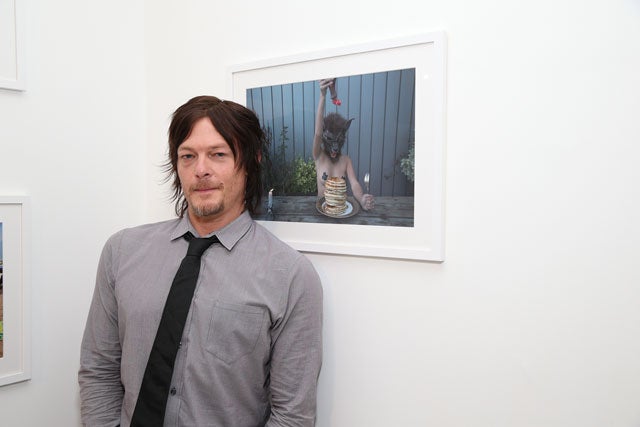 Do you have a favorite photo from the book?

“I like the one with the girl pouring syrup on the pancakes. That one came in five seconds. I just ordered maybe eight servings of pancakes and went through so many different masks and versions in the 20 minutes I had. It was pretty crazy choosing which paper to print on, too. I wanted it to stick out from the others.”

Is your top-secret project with Brooklyn animators still happening?

“Yeah, and its morphed into something else. It’s happening.”

Is it going to be dark?

You and Aaron Paul (from Breaking Bad) have become these cult-favorite characters who are bad, but good and everyone loves them. Your characters are cut from the same cloth, no?

“A little bit, yeah. But, they’re different; totally different, actually. They’re both interesting people. When you’re doing a movie, you have a month or two to tell an hour and a half long story. With television, you have years to create a character. His character on Breaking Bad was much different at the end than he was at the beginning.”

Do you ever have moments when you have to tell people that you aren’t Daryl?

“I get it a lot. The whole ‘Hey Daryl!’ People send me redneck-y items in the mail sometimes, like squirrel meat and silicone breasts. People understand it’s a character, though.”

“You’d be surprised at the strange things that fill my trailer every week. The silicone breast is actually my iPhone cradle in my trailer. It was used, too — removed from someone’s chest and sent to me.”

Do you tune out when someone brings up the comic book to you since your character isn’t in it?

“No! It’s interesting. The world that Robert Kirkman created is so vast and interesting; it’s the basis of our show. I’m very versed in the comic book. Frank Darabont created the character for the show, and Robert loves it. I keep offering to clean his house, wash his car so he can put Daryl in the comic books.”

Can you tell us anything about your new movie with Naomi Watts, Sunlight Jr.?

“It’s a love triangle between Naomi’s character, Matt Dillon’s character, and mine. I’m a very bad guy in that movie. I’m a super-jerk.

Are you ever going to play a nice guy?

“That’s what my mom keeps asking me, ‘When are you going to do a nice romantic comedy with Jennifer Love-Hewitt.’ And, I just don’t think I look like that. I’m not opposed to it, though. Jennifer, call me.”

Do you feel like the golden age of television has arrived?

“Well, there’s still good movies out there. When I first started out, the movies were the roles to get. If you got a role on a TV show, you’d get a pat on the back with a little, ‘Keep trying man.’ Now, the writing is so good on TV, and there’s so many good shows, I find it super liberating. I thought it wouldn’t be like that. You have the time to create a character, and understand their nuances. I find it very freeing.”

With all of these TV shows ending, the ones you’re a fan of, who would you grab to bring on as a guest for The Walking Dead?

“Hmm maybe the white-haired girl from Game of Thrones, because she has dragons. That would be fun on The Walking Dead, because she could burn zombies in large groups.”

Norman renders the author speechless, witless.
Advertisement
Entertainment News
Prince Harry & Meghan Markle Will Leave Their HRH Titles Behind —...
When Prince Harry and Meghan Markle announced that they would be taking a step back from the royal family, there was a lot of confusion about what, exactly
by Lydia Wang
Pop Culture
Cameron Diaz & Benji Madden Got Creative With More Than Their Bab...
One of the toughest decisions parents must make is what to name their child. What’s in a name? How creative should you get? Should you continue family na
by Tara Edwards
Entertainment News
One Of R. Kelly’s Girlfriends Has Reunited With Her Estrang...
When Surviving R. Kelly first aired on Lifetime, the world was introduced to the harrowing personal stories of women who alleged that the R&B singer ha
by Ineye Komonibo
Entertainment
American Horror Story & The OA Actor Dead At 27
Hollywood has lost another star. Harry Hains, popular for his roles in shows like Ryan Murphy’s award-winning American Horror Story and the beloved sci-f
by Ineye Komonibo
Entertainment News
R. Kelly’s Girlfriends Got In A Fight On Instagram Live & N...
As if the charges he’s currently facing weren’t already gravely serious, R&B singer R. Kelly’s legal situation might be getting even more complic
by Ineye Komonibo
Entertainment News
Silvio Horta, Creator Of Ugly Betty, Found Dead At 45
TV producer and creator of ABC’s Ugly Betty Silvio Horta has died, according to Deadline. Reports around the cause of death vary at this time. Refinery29
by Kaitlin Reilly
Pop Culture
Riverdale‘s Vanessa Morgan Tied The Knot With A Ce...
Vanessa Morgan and MLB star Michael Kopech have tied the knot. Morgan, who plays Toni Topaz on the hit CW show Riverdale, and Kopech, a pitcher for the Chi
by Alejandra Salazar
Entertainment News
Leaving Neverland Accusers Can Sue For Sexual Abuse, After...
As of January 1, 2020, a California law preventing victims of childhood sexual assault from filing a claim against a corporation after the age of 26 has un
by Sarah Midkiff
Movies
Time’s Up Addresses Exploitation In Auditions, Nude Scenes & Work...
Time’s Up has taken a major step to empower workers in the film industry. The organization debuted its three-part guide to working in entertainment to ed
by Sarah Midkiff
Entertainment News
DaBaby Has Been Arrested On Battery Charges
Rapper DaBaby (real name Jonathan Kirk) was taken into police custody and questioned by authorities on New Year’s Eve during a trip to Miami, FL. The
by Ineye Komonibo
Entertainment
Nick Gordon, Ex-Boyfriend Of Bobbi Kristina Brown, Is Dead At 30
The Associated Press reports that Nick Gordon, the ex-partner of Whitney Houston’s late daughter Bobbi Kristina Brown, has died. He was 30.  Gor
by Leah Carroll
Entertainment News
America Ferrera Kicks Off 2020 By Announcing She’s Expecting Her ...
America Fererra is expecting her second child! She rang in 2020 by announcing her pregnancy on Instagram, in a photo surrounded by her husband, Ryan Piers
by Meagan Fredette
Discover
R29 Stories & News
Watch
R29 Original Series & Films
Shop
R29's Most Wanted