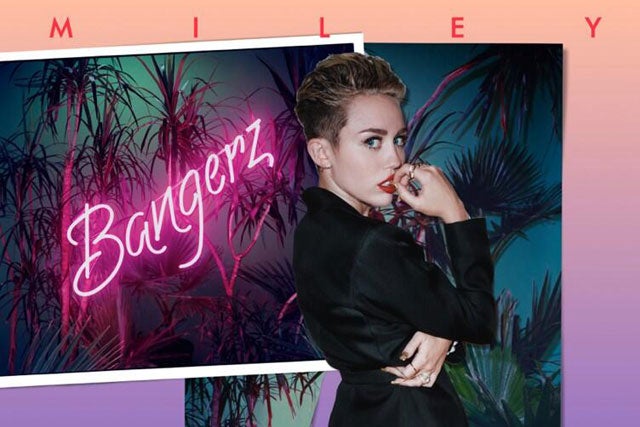 Courtesy of RCA
If you are a person with eyes, ears, and a penchant for the Internet, you may have thoughts on Miss Destiny Hope Cyrus. She has this new album out, you see, and in order to promote it, she's gone on a media bender that has been the subject of much discussion. Of course, she's earned her recent celebrity through unabashed behavior, near-nudity, and bringing "twerking" into the national lexicon. She's been called both a racist and a game-changer, and has even managed to offend The Stroke Association. But, she's making music, yo. And, whether or not you choose to engage in the messy, adolescent, and admittedly catchy discussion she's conducting — it's happening. Think about it. The other musician-turned-sideshow, Mr. Kanye West, has also captivated us with his endless antics, but then turned around a frustratingly visionary album this summer. Does Miley have the same capacity, with her "Wrecking Balls" and those Dirty South beats?
Advertisement
The short answer: kind of. Bangerz is catchy as all hell, with some seriously sing-along-worthy tunes that will find themselves nesting comfortably in the Top 40 charts. Cyrus does a good job reminding listeners that she is the daughter of a country star, with her twangy-Southern accent that, if you aren't a fan, isn't very ingratiating. Fortunately, Cyrus sticks to her range, and knows that she can enhance her sometimes-thin voice with raspy breathing, vocal fry, and a good sense of pacing. But, she can't lose that, well, Miley Cyrus-ness, even on trap-style beats. Her fast-paced "rapping" (if that is even the right word) sounds more like a fast-paced C-and-W chorus — something that she acknowledges in the Nelly-accompanied track, "4x4," which is a questionable hybrid of a country song send-up to a car with a club song...maybe. Another example would be "Do It Right," her most trap offering, where she doesn't sound at home, and it shows...and is an awkward listening experience. These are perhaps the album's darkest points. (In fact, it's when the she really pushes her limits that the tracks fail to work.) 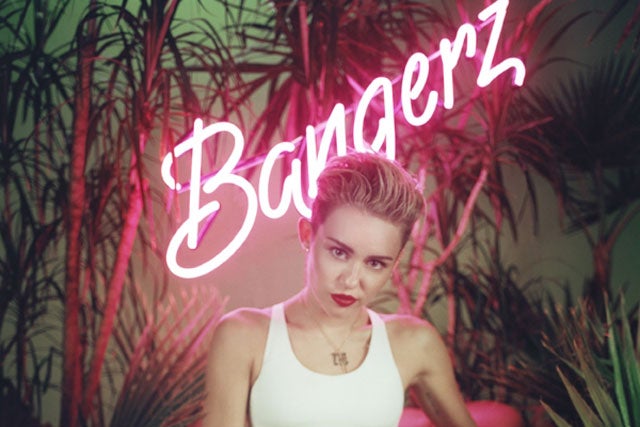 Yet, when the performer really turns up the drama — the electronics, the hysterics, the inherent Miley-ness — well, those tracks sound pretty darn good. The tried-and-true pop anthem, "Maybe You're Right," has an anthemic feel that will give Katy Perry a serious run for her money. And, critics are already drooling over the sultry French Montana song, "FU," which is angry, pounding, and wobbling. (Though, it does have the lyrics, "I'm not as stupid as you sound, and you sound really dumb right now." Guess we can't have it all.) Interestingly, the one song that she doesn't have writing credits on feels very Hannah Montana — the easy-breezy, radio-ready "#GETITRIGHT" by Pharrell. Miley, it appears, feels most fresh during the slow jams.
The bottom line is that Miley wants it all. She wants pop drama and vocals, she wants urban authenticity, and she wants to remain true to her country roots. Similarly, she wants to be independent, shocking, and sexually realized — yet always plying her vulnerability, heartbreak, and the shaky reality that comes with leaving your teens behind. Like any 20-year-old, she wants everything, but can't commit to any thing. But, when she gives a little and takes a little (a good example is the straightforward track, "Someone Else"), that's when the album becomes a success. There is a vision here, which is to go hard, but not everywhere, and not all at once.
Movies
Don’t Worry Darling Can’t Overcome The Rumors
Spoilers ahead. In the world of Don’t Worry Darling’s Victory, a sun-cloaked desert planned community, 1950s-era gender roles are alive and things aren
by Katherine Singh
Unbothered
Sanaa Lathan Is A Director Now & On The Come Up Is Her T...
Welcome to “What’s Good,” a column where we break down what’s soothing, distracting, or just plain good in the streaming world with a “rooting fo
by Kathleen Newman-B...
Disney
How To Score A Disney+ Subscription (Even If It’s Just For ...
I say “Disney” you say “land,” or “world,” or perhaps now during the height of at-home streaming, you chime “plus
by Alexandra Polk
Advertisement
Unbothered
John Boyega Says He Only Dates Black Women — What’s The Issue?
British-Nigerian actor John Boyega is the latest subject of online discourse this week, and surprisingly, it’s not because of his stellar (and thirst-ind
by Ineye Komonibo
Dedicated Feature
This New Horror Film Will Give You A Fear Of… Smiles
When it comes to horror movies, there isn’t a whole lot that we haven’t seen: mask-wearing killers, extraterrestrial life, monsters that take on every
by Andrea Cheng
Unbothered
Bravo’s Real Girlfriends in Paris — Like Emily In Paris...
When Emily in Paris premiered on Netflix in 2020, audiences excitedly tapped into plucky protagonist Emily Cooper’s (Lily Collins) quarter-life crisis as
by Ineye Komonibo
Somos Latinx
Jessie Reyez Finds Healing On YESSIE — & You Will, Too
Ten seconds into Jessie Reyez’s debut album, “Before Love Came to Kill Us,” she sings, “I should’ve fucked your friends. / It would’ve been the
by Brenda Barrientos
Movies
Do Revenge Wants You To Embrace Your ‘Glennergy’
Spoilers ahead. To be a woman today in the world is to be in a perpetual state of rage. Or at least feel like you’re always on the verge of screaming. Th
by Katherine Singh
Mi Casa Es
Oye Mi Canto: The Nostalgic Music That Cures Our Homesickness
Music is a powerful catalyst in evoking memories of a time and place that’s far away. In the 2017 Oscar-winning animated fantasy “Coco,” it’s the s
by Marjua Estevez
TV Shows
Tell Me Lies Episode 4 Sex Scene Shows Why We Need Enthu...
Tell Me Lies might seem like a young woman’s sexual fantasy of a college relationship. After all, the first time Lucy (Grace Van Patten) and Stephen (Jac
by Olivia Truffaut-Wong
Emmy Awards
Quinta Brunson & Sheryl Lee Ralph Are Emmy Award Winners, Baby!
When Quinta Brunson first began working on the pilot for Abbott Elementary, she just knew that she had a hit on her hands — so much so that she vowed to
by Ineye Komonibo
TV Shows
The Tell Me Lies Cast’s Red Flags Include Craigslist & P...
The thing about red flags is that no matter how big they are, how in-your-face they may be, or how often your friends try to point them out, it’s likely
by Melissah Yang
Advertisement
Advertisement
Discover
R29 Stories & News
Watch
R29 Original Series & Films
Shop
R29's Most Wanted