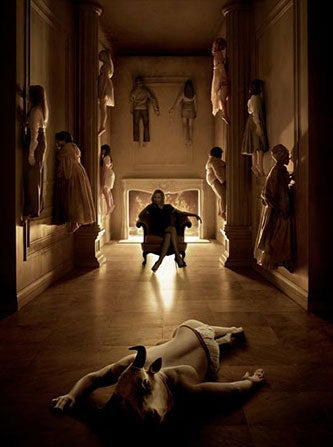 Photo: Courtesy of FX.
The witches are coming, and let's just say they don't come in peace. With the premiere of American Horror Story: Coven quickly drawing near, new information regarding the heavily guarded cast has come forward. The New York Times reports that tonight's episode won't ease the viewer into the macabre world of 21st-century, New Orleans witches. While we weren't expecting a "ho-hum howdy do" greeting (the opening credits alone give us the creeps), we certainly weren't planning on sex, death by sex, rape, drug use, and torture. (Well, actually, this is a Ryan Murphy show, and he's never been one to shy away from extremes.)
Aside from the return of Taissa Farmiga, Sarah Paulson, and Jessica Lange, fresh blood by way of Emma Roberts, Gabourey Sidibe, and Kathy Bates will come to play in the school of witchcraft. Roberts' Madison, a bossy Hollywood star, will have her ego handed to her (you can see a glimpse in the trailer, here). Bates will play Madame LaLaurie, a 19th-century witch with a brutal penchant for unorthodox skin treatments (which makes sense that she and Lange's Fiona are paired together, as the latter is obsessed with youth.) Sounds like we've got some blood baths in our televised futures. (The New York Times)
TV Shows
WandaVision’s Second Post-Credits Scene — & Its Poss...
Warning: Spoilers for the WandaVision series finale are ahead. The Marvel Cinematic Universe has perfected the art of leaving the audience wanting more, an
by Leah Marilla Thomas
Movies
Raya And The Last Dragon’s Voice Cast Is Full Of A-L...
by Olivia Truffaut-Wong
Pop Culture
Kim Kardashian Reacts To Framing Britney Spears By Calli...
The release of the FX-Hulu documentary Framing Britney Spears, has prompted a collective reckoning on some of the damaging ways the public and media h
by Natalie Morin
Entertainment
Raya & The Last Dragon Introduces Disney’s First Sou...
There’s a lot riding on Disney’s newest animated film, Raya and the Last Dragon, which introduces the studio’s first Southeast Asian prin
by Olivia Truffaut-Wong
Movies
Coming 2 America Has A Massive Cast & So Many Cameos
by Ariana Brockington
Music
Every Song In Coming 2 America — From Parodies To New Mega...
by Ariana Brockington
Entertainment
Meghan Markle’s Suits Husband Has Some Strong Words For He...
As the world anticipates the Meghan Markle and Prince Harry’s tell-all exclusive interview with Oprah Winfrey, the former Duchess of Sussex can rest easy
by Ineye Komonibo
TV Shows
Merci, Netflix! Lupin Is Coming Back Sooner Than You Think
Note: This article contains spoilers for Lupin.  Normally, ripping through a delicious new TV show means having to contend with an especially cru
by Natalie Morin
Movies
Coming 2 America Tries To Be Nostalgic & Woke — In The End...
This story contains mild spoilers for Coming 2 America, now streaming on Amazon Prime Video. Since the premiere of Coming to America in 1988, the movie has
by Ineye Komonibo
Pop Culture
Paris Hilton Accepts Sarah Silverman’s “Genuine”...
Following Sarah Silverman’s recent apology to Paris Hilton for a joke she made at her expense 14 years ago, Hilton has said that she is ready to to &
by Natalie Morin
TV Shows
15 Shows To Watch If You Have A WandaVision-Shaped Hole In...
by Leah Marilla Thomas
Movies
So…What’s Next For The MCU After WandaVision?
by Ineye Komonibo
Discover
R29 Stories & News
Watch
R29 Original Series & Films
Shop
R29's Most Wanted