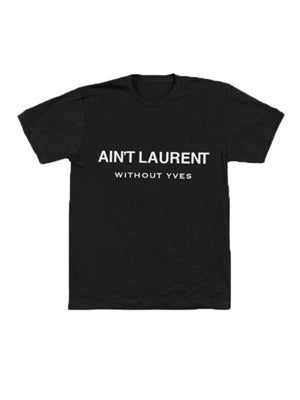 Photo: Courtesy of What About Yves.
Hedi Slimane was not amused by Colette's decision to stock T-shirts emblazoned with the words "Ain't Laurent Without Yves" alongside his own Saint Laurent designs. Yesterday, Sarah Andelman, who owns the Parisian boutique, announced that Saint Laurent had broken ties with the store for stocking the T-shirts by What About Yves.
When asked to remove the offending garments in early September, Andelman apparently agreed to stop selling them online, but said that she would off-load remaining stock in her Paris store, which she said had happened by September 21. But she told WWD that Saint Laurent then cancelled Colette's spring and resort orders, which totalled around $136,000. “We have been excommunicated,” she said. “There is no respect for all the work we did in the past."
Advertisement
The Parisian concept store has stocked Saint Laurent swag since 1998, and Andelman claims that wholesale orders over the years add up to close to $4 million over the years. She added that Saint Laurent’s reaction was part of a larger problem where labels increasingly attempt to control how and what stores sell. “Should we accept fashion dictatorship?” she said. It's a fair point.
While it's understandable that Slimane might be a tad offended by the slogan, he has been notoriously particular about the label’s rebranding since he took the reins — and he is fast gaining a rep for possessing one for the industry's most sensitive egos. His infamous public spat with Cathy Horyn provides a case point — and the violent reaction to these T-shirt is not going help him on this front.
Colette still carries covetable punny sweatshirts by the likes of Brian Lichtenberg, whose creations riff on brands like Hermès (Homiès) and Cèline (Fèline). But Andelman said that other unnamed major labels have asked her to take down Instagrams of products that parody their name. So, does this mean the era of the high-end parody T-shirt and sweatshirt has officially ended? Either that or designers need to get a sense of humor pronto...
(WWD)
News
Want To Defund The Police? Here’s How To Help
The movement to defund the police is gaining unprecedented support right now for good reason.
by Natalie Gontcharova
News
Kim Potter Claims She Mistook Her Gun For A Taser. That DoesnR...
Just 10 miles from where Derek Chauvin is on trial for killing George Floyd, another case of police violence is unfolding. On Sunday afternoon, a police of
by Sarah Midkiff
News
Hooray, You’re Vaccinated! Now What Should You Do With Your...
With COVID-19 vaccine eligibility slowly opening to people of all ages across the country, there’s a good chance that you or someone you know has rec
by Asia Ewart
Advertisement
News
Can Andrew Yang Tweet His Way To Being NYC Mayor?
After an unsuccessful 2020 presidential campaign, entrepreneur Andrew Yang has set his sights on becoming mayor of New York City. And while the mayoral fie
by Danielle Campoamor
US News
The Police Are The Problem
As Covid-19 restrictions are decreased or rescinded entirely across the country, the United States is returning to a slew of horrendous American “nor
by Danielle Campoamor
News
Prince Philip Has Died & It’s Important To Be Honest About ...
On Friday, Prince Philip, the Duke of Edinburgh and husband to Queen Elizabeth II, died at the age of 99. According to Buckingham Palace, who announced his
by Leora Yashari
News
Getting Rid Of This One Piece Of Legislation Could Transform Abor...
In 1976, House Republicans proposed the Hyde Amendment, which bans the use of federal funds from covering the cost of abortion care for poor and low-income
by Danielle Campoamor
News
You’re About To Hear A Lot More About “Ghost GunsR...
When Joe Biden was inaugurated, he became the president with the most comprehensive gun control plan and background in U.S. history. On Thursday, he unveil
by Lydia Wang
News
No, Revenge Porn Is Absolutely Not “Free Speech”
On Wednesday, former congresswoman Katie Hill, who at one time represented California’s 25th congressional district before resigning in November 2019
by Danielle Campoamor
Asian American
Talking About Anti-Asian Hate With My Conservative Chinese Mother...
When my mother’s family came to the United States in the 1970s, their experience was far from the romanticized immigrant story we’re often told in Amer
by Kristin Wong
News
Arkansas Is Now The Most Dangerous State For Trans Youth
On Tuesday, Arkansas became the first state in the U.S. to ban gender-affirming treatments and surgery for transgender youth. The enactment comes after law
by Sarah Midkiff
News
Piers Morgan Blames The “Woke Mob” For Being Fired — ...
In an interview that absolutely no one asked for, Piers Morgan spoke with Tucker Carlson for over an hour about how it was the “woke mob” that forced h
by Sarah Midkiff
Advertisement
Advertisement
Discover
R29 Stories & News
Watch
R29 Original Series & Films
Shop
R29's Most Wanted